Youth Set Sails for the Kingdom

Guest Feature by Steve Vistaunet, Gleaner Editor, Jan. 28, 2015, Reprinted by permission from the October Gleaner.  Mix 180 young people and their leaders together on a sailing ship in the middle of a rainy October weekend, and you’ll get an adventure.

Bob Gaede, a lay member from Rockaway Beach, Oregon, has planned a number of active weekend activities for Oregon Conference Pathfinders. But this was the first one he has organized on behalf of three Northwest conferences — Oregon, Washington and Upper Columbia.

Gaede is passionate about providing spiritual, hands-on experiences to Adventist youth, and this weekend event, centered in Olympia, Washington, and held October 10–12, was no different. Activities were organized around three stations: an adventure on the historic Adventuress sailing vessel, a trip on an open whaling boat and a learning activity on small sailing dinghys. 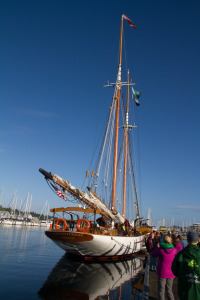 The schooner Adventuress sitting in port.

The Adventuress is a 130-foot vessel listed as a National Historic Landmark and operated by Sound Experience, a nonprofit entity. Gaede and his team designed an onboard program for the Pathfinders that helped them experience the spiritual lessons in the stories of Jesus asleep in the disciples’ boat and of Peter attempting to walk on the water, as well as learn the basics of navigation and tall-ship sailing.

The weekend was forecast to be inclement, with rain and wind. When the first group went out on the large sailing vessel, clouds were dark and rain was falling out on the Sound. But the ship sailed for four straight hours with rain on each side and bright skies overhead. Only when it returned to the dock did the heavens open. Likewise, rain held off for the afternoon sailing and again on Sunday morning. 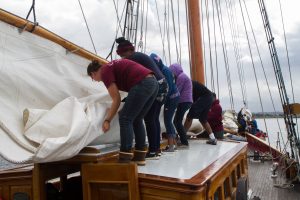 Crew members and Pathfinders help roll the sails as the boat prepares to return to port.

Another activity, originating from the Tacoma, Washington, Sea Scouts base, took Pathfinders out on a whaling boat, originally from the USS Nimitz. On the water, leaders recounted the example of Jonah, drawing “lots” to see who would be thrown overboard to illustrate the story.

While this event may have helped each Pathfinder who went achieve a better understanding of sailing, the main purpose, says Gaede, was something far more important. “With each of these weekend events, we hope to create a spiritual experience surrounding a Pathfinder honor by using some activity other than a sermon,” he says. “Hands-on lessons make a lasting impression for the kingdom and build lifelong friendships.”

Gaede began organizing local Pathfinder events with Anne and Glenn Campbell 18 years ago. Even with the hard work of the leadership team, including, among others, Rick Pummel, Ed and Erin Betz, and Michael and Lauren Gregory, this weekend wouldn’t have happened without a few miracles along the way. Miracle after miracle, says Gaede, keeps these events going strong. “It’s such an incredible way,” he says, “to work with the Lord.”