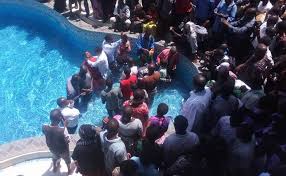 15 June 2018  |  Using a television network to link more than 4,000 locations across the East Africa nation of Tanzania, the Revelation of Hope campaign has had more than 19,000 baptisms so far. It was an historic event both for its introduction of new technology and the impact on the general public in the nation, Adventist Today has been told by a number of sources in Tanzania.

Mark Finley was the lead evangelist, up-linking from Mwanza, the second largest city in the country. It was the first international live event to be aired by the denominations Hope Channel Tanzania since its inauguration. The sermons were translated into Swahili, the most widely used native language in East Africa.

The Honorable Mwigulu Nchemba, cabinet minister for Internal Affairs in the national government of Tanzania, helped launch the campaign on May 13. The minister arrived at twilight to the Kirumba CCM Stadium. He was received by a rainbow of tents, interspersed with Pathfinder drill teams and Adventist women’s groups parading on the lawn. A cohort of choirs greeted him in colorful attire. “The scene was breathtaking,” said an Adventist Today reporter on the scene.

Nchemba said he was willing to come launch the Adventist campaign because he respects the contribution Adventists have made to the development of the nation. He further stated that the meetings will contribute to the decrease of crime because many people will accept Christ and change their lives. “When the word of God is spoken and followed, the burden of the government becomes light,” he said.

Nchemba continued, saying he admires Adventists for how they educate the youth. He said they are good role models in the country. He shared that when he was a student, he had Adventist classmates whose Christian lifestyle left an indelible impression on him. He added that he knows Adventists as a people who walk their talk no matter where they are. “You are a book we all read, and I am glad that you are positively legible in your business.”

During the introductions, an officer of the South Nyanza Conference had mentioned the challenge of the government scheduling exams on Sabbath in the public schools. Nchemba picked up on this issue and stated that the Tanzanian government respects freedom of worship.  He promised he would do his best to make sure all Adventists students are able to exercise their faith freely.

Before he concluded, Nchemba asked the Adventist Church to pray for him, His Excellency John Pombe Magufuli, the president of the Republic of Tanzania, and the government at large. He expressed his wish to have the Adventist Church increase in numbers. “How can we afford to have more bars and dance clubs than churches in our cities?” he asked. “We will spare no efforts to support the Church because in so doing we will be supporting our community at large.” Pastor Blacious Ruguri, president of the denomination’s East-Central Africa Division, prayed for Nchemba and asked God to bless the Tanzanian government for the religious liberty it grants.

Mark Finley and his wife Ernestine Finley, who has presented health talks each evening, are now the favorite preachers in the country, the Adventist Today correspondent in Tanzania reports. They trending on social media throughout eastern Africa.

On the last Sabbath, there were 22,000 in attendance at the central uplink location and another 45,000 attending at the linked sites. Church members facilitated the operations at the many locations and supported the campaign with financial contributions. Overwhelmed after watching thousands wade into the waters of Lake Victoria for baptism, Finley said he will never forget the time God allowed him to see the miracle of salvation.

John Mongera, regional commissioner of the Mwanza region local government, gave some closing remarks in which he referred to the Adventist Church as “our church.” He commended the denomination for a good relationship with the government. He also surprised the audience by revealing that the three weeks of public meetings brought peace and security to his territory. “We owe the Adventist Church a great debt of gratitude. Thank you for fighting ignorance among our people through education and health.”

“Revelation of Hope” was the theme of the campaign. It was organized by the Northern Tanzania Union Conference.

On the east coast of Africa, Tanzania is one of the most prosperous economies in the region with a population of 55 million. There are nearly one million Adventists and about 3,000 congregations.