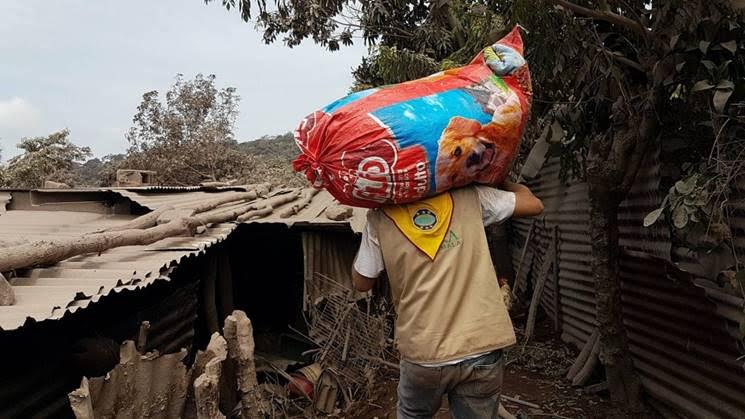 From ADP, 14 June 2018  |  The outbreak of a volcano in Guatemala in early June in which more than 75 people died and more than 200 are missing, brought an emergency response from the Adventist Development and Relief Agency, ADRA Guatemala. Volunteers immediately distributed drinking water and food to those affected.

“From the first day of the eruption, our local emergency team met with local authorities, visited the affected villages near the volcano and organized to secure accommodations,” said Gustavo Menendez, director of ADRA Guatemala. During the first week, three trucks were sent with drinking water, food, blankets and hygiene kits, all collected from churches in other regions in Guatemala, Menendez reported.

More than 1.7 million people have been affected, according to reports. About 3,000 people were evacuated and about 2,600 of these are in shelters. Hundreds more were waiting in their homes in rural communities. “Our main concern is to encourage people to get to safety, even though hundreds are concerned that they will lose all their belongings when they leave their homes,” said Menendez.

ADRA International has committed to providing funds to help families rebuild their lives, said Menéndez. “It will take more than a year, until these farm families grow plantains, coffee, pineapple and more, as we help them to restore their economic base.” Assistance will be provided to families in the meantime.

APD is the Adventist News Service in Europe. The photo was supplied by APD and captures ADRA volunteers delivery relief supplies to a village.