Dennis Meier: Adventism in the Most Godless Region of the World 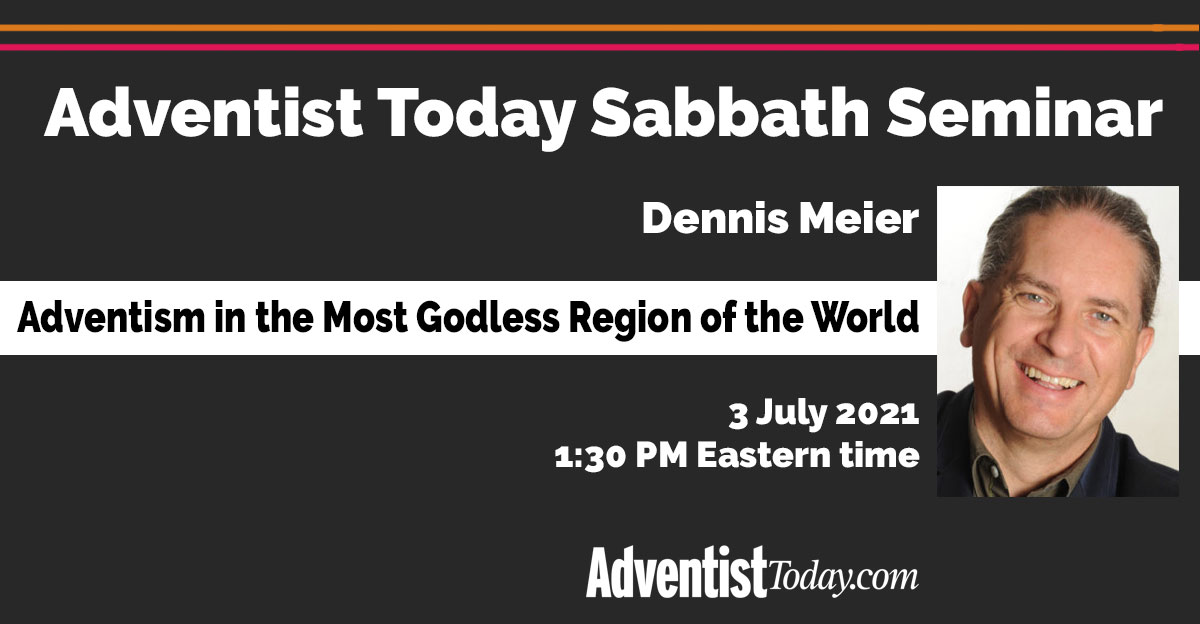 An excerpt from “The Most Godless Region of the World: Atheism in East Germany” by Sophie L. Goddyn, St. Mary’s Academy:

With a population of 52.1% presently identifying as atheists, East Germany ranks as the most atheistic region of the world. This anomaly can be explained through the economic lenses of supply-side theory and demand-side theory when analyzing the changes instated by the Communist Party during the life of the German Democratic Republic, from 1945 to 1989. Through a process of secularization and religious oppression, the Communist Party lessened the supply of religious goods in East Germany. On the other hand, it also minimized religious demand by providing secular alternatives to traditional religious practices, and institutionalizing anti-religious sentiment. These actions combined have caused the number of citizens subscribing to religious institutions to decrease steadily over the past century.

An excerpt from Dennis Meier, “The Spirit and the Letter”

I was in attendance in 2012 when my union conference (the North German Union Conference, or NDV) voted for equality in pastoral service. The motion was placed on the agenda by a single individual, though the Executive Committee seemed happy to bring it up for a decision.

The motion passed with a solid 85% margin. And what is even more remarkable: there was no uproar, no major arguments from rivaling camps, after the vote. Our right-wingers just shelved it as one more proof that German Adventism was out of sync with the world field. Those who favored full female ordination appeared to be ready to sacrifice it on the altar of “unity”—an expectation that is always thrown at the parts of the world that stand for equality.

San Antonio 2015, for some odd reason, caught us by surprise. Our optimism had proved to be just a perception bubble.

In 2013 I had been elected president of the Hansa Conference, the most northern of the German conferences. That made me part of the strategic planning amongst the presidents on how to react to the vote, and how to find solutions. I remember our grappling with this issue whilst enjoying Syrian food at a restaurant. What emerged is what I have since described as the art of protesting without being noticed. How can we be true to our resolutions about equality, and at the same time wave to the world with a big smile of loyalty? The solution that materialized, while not bearing the made-in-Germany trademark, was driven by a naive belief that GC administration and the world field would greatly appreciate our working policy expertise and canonical craftiness. Theologians too readily stepped aside and sent in the lawyers. Just as some world fields hadn’t been forced to ordain their female elders and deaconesses, no one would resent us doing likewise for our ministers. It was resolved to suspend ordination and henceforth only use the commissioned ministers credentials for both sexes.

(Fun fact: we never really understood that a difference existed between them).

For at least the past three years we had heard the rumbling of a distant thunderstorm, that would pass us by. Or so we thought. Autumn Council 2019, however, revealed the price we are now asked to pay.

We love our world church, and wanted to show that as best as we could. That much must be said. At least someone could have honored our attempt to navigate between the world church and our constituencies. Someone could and should have, even if paternalistically, lauded us for at least trying to be faithful. We didn’t want to be rebels, or to be labelled as rebels, or even to be camouflaged rebels. But now we have been warned, and it is an embarrassing warning. Not just because it happened (shameful in itself), but because we betted on the letter of the law and set our hopes in the policies. We thought the policies would work for us, too.

If being warned can be worn as a badge of honor, as some seem to say, it is a somewhat excruciating honor to be warned for not having done something that we at heart think to be the right thing. I would have preferred to incur a warning for actually having gone forward in ordaining women, as other fields bravely did: the Columbia Union Conference and the Pacific Union Conference, who just barely missed the honorable badge of a reprimand. I now feel that we can’t insist on listening to the promptings and calling of the Holy Spirit by wiggling our way through the letter of the law. How could we have been so deluded? I had to witness our eloquent and articulate Union Conference presidents, whom I admire, quoting the letters and ordinals of the Working Policy—still placing hope in the letter of the law, even as we began to understand that the spirit of the vote in San Antonio was to hinder us from exercising equality and to force us to sacrifice our convictions on the altar of unity.

All of which pins a faulty reading of Acts 15 against the obvious and concise “Aha!” of Peter in Acts 10:34: God shows no partiality (literally: He is not a favoritist; Greek: prosopolemptes)!

Dennis Meier is the president of the Hansa Conference in the North German Union Conference (NDV).

Loren Seibold is the executive editor of Adventist Today.

This class is over. You can watch the recording of the presentation here.