Billy Ain’t in Heaven, Hell Fires Haven’t Been Kindled, and It Don’t Matter. 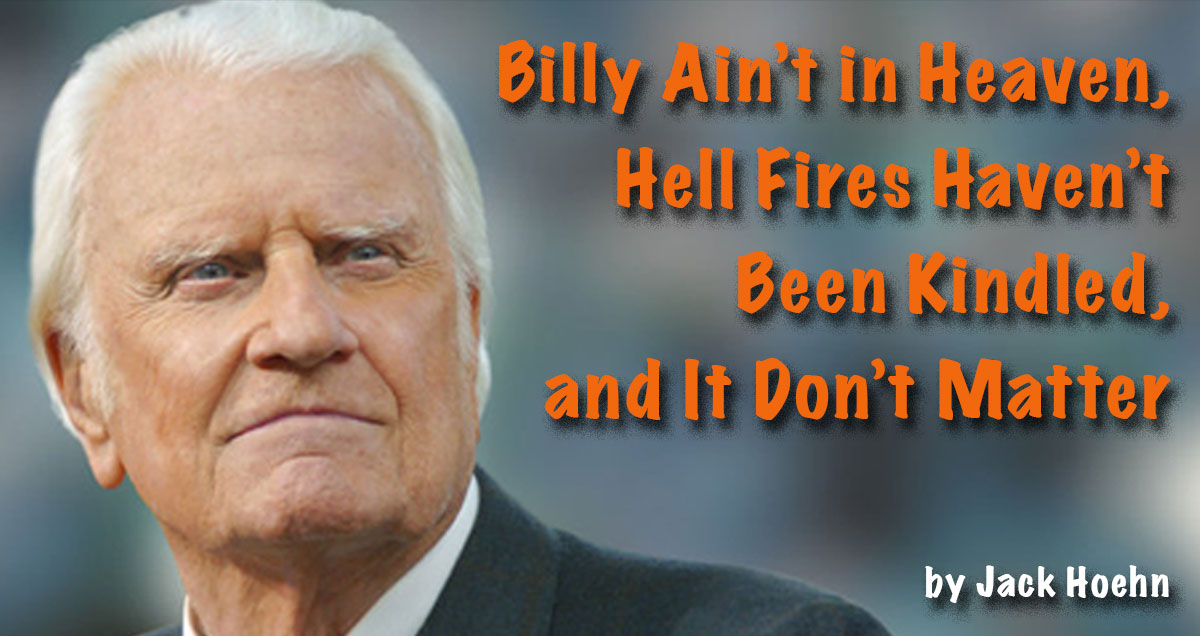 The United States of America opened its political shrine to lay in honor the deceased preacher William Franklin “Billy” Graham Jr. For seven hours on Wednesday, February 28, 2018, presidents, the powerful, and their entourages stopped their business, management, pleasures, and pains to come and join the lines of ordinaries recognizing the handsome simple poor boy from the South who touched millions with the call to come to Jesus. On February 21, he died at 99 years of age, the most influential Protestant since the Reformers.

At his self-planned funeral on Friday, March 2, southern Christianity laid Billy Graham to rest with the idioms common to Southern Baptists and the so called evangelistic crusades: the Bill Gaither Band; piano medleys of Protestant hymns; congregational singing; black, brown, Asian speakers and a bagpiper in kilts. Jesus was mentioned 90 times under the huge tent, a fitting end for the tents on dusty vacant lots the evangelist had started out with.

His children laid aside the resentment of preacher kids and gave a few minutes of gratitude and praise to their father lying before them in a casket made by prisoners and carried by grandchildren before the crowd. Donald Trump and First Lady Melania sat through the hours-long service without a single twitter. His ordained pastor daughter recommitted her life to doing what the Southern Baptist church had formally forbidden, preaching the gospel as a female. A divorced and once foolishly remarried daughter retold her father’s love that accepted her unconditionally in her humiliation.

Although his old and dead body was still nine days deceased in the box before them, speakers repeated the old comforting lie that Billy was now at the throne of God in Heaven. His son Franklin fleshed out his meeting God, his wife, and deceased parents, all those in this Heaven who weren’t consigned to the Hell, his son reminded us, that Billy also believed in. “My father preached on heaven, told millions how to find heaven, wrote a book on heaven, and now he’s in heaven. His journey is complete.”

It takes quite a bit of twisting and turning to try to place the deceased consciously in Heaven “with the Lord.” Instant conscious Heaven is at odds with the statement of the Lord himself that even three days after he had died he had not yet “ascended to the Father” (John 20:17). And many texts confirm that those who die in Christ “sleep in the dust” (Daniel 12:2; John 11:11). The English translation of the strangely skeptical Ecclesiastes (12:7) that says “the Spirit returns to God who gave it” may be less confusing if we realize that the word “Spirit” is an interpretation of the word “wind” or “breath.” The body goes into the ground, and the breath goes back to the Breath Giver. At Billy’s funeral the entire text of 1 Thessalonians 4:13-16 was quoted, clearly stating that the living and the dead will “be with the Lord” after the second coming of Christ at the end of earth’s history, not before.

St. Paul wasn’t sure if he wanted to live longer or “be with the Lord” in death. We understand you can be with the Lord in death-sleep the same as in conscious disembodied spirit-life. Yes, I know that in apocalyptic visions, the highly symbolic Revelation shows souls from under the altar crying out “how long?” (Revelation 6:9,10) But none of them are happily dancing about on the sea of glass, with deceased mates or parents, or looking down as disembodied ghosts watching us perform the funeral services over our bodies. Even if those dead bodies are sleeping in the Capitol Rotunda of the United States.

We were reminded by his son Franklin that Billy Graham “believed in Hell,” with no further details given, but the implication was the classic Hell of terrible never-ending pains, as well as Jesus the rescuer who saves us from God’s eternal torments. “Give your heart to Jesus” (pronounced even today in my mind with southern twang as JEEzus) was the simple yet profound message from Billy Graham that millions had heard and responded to. And Jesus accepts all hearts, even with twisted and frankly repulsive theologies.

So, Billy Graham isn’t now conscious in Heaven. Nor has he saved one soul who “came to Jesus” to escape from an angry God who punishes temporal sin in mortals—born without choice into sin—with eternal pain and hot fire injury in a Satanic never-ending hell. There is no such God to run from. “God was in Christ reconciling the world unto himself” (2 Corinthians 5:19), not saving humans from his angry self. We all believe in the grave, the pit, sheol, and millions of humans suffer a temporary “hellish” existence in their lives on earth. Pain, sorrow, punishment, and suffering are indeed the lot of sinners, but in this life, not for eons to come. And caused by God’s enemy, not by God. The fires of hell are to clean up the rubbish, not to punish sinners.

Seventh-day Adventists with the “correct” theologies of death-sleep, no punishing hell fires, and the right day to Sabbath on, who have not offered Jesus to millions or thousands or hundreds unattached from our theologies and unencumbered by our standards, have nothing to be proud of. Because Billy Graham didn’t move the great and the small of his lifespan with his somewhat simplistic and sometimes wrong theology; he moved them to a person, a life giver, a moral compass in an immoral world, a comfort in our personal hells, a hope beyond our graves and coffins. The southern country boy moved millions unhindered by religion, race, nationality, gender or status to call out to the living world-loving Jesus who has a very kind and loving Father. And that, very much, is what matters.