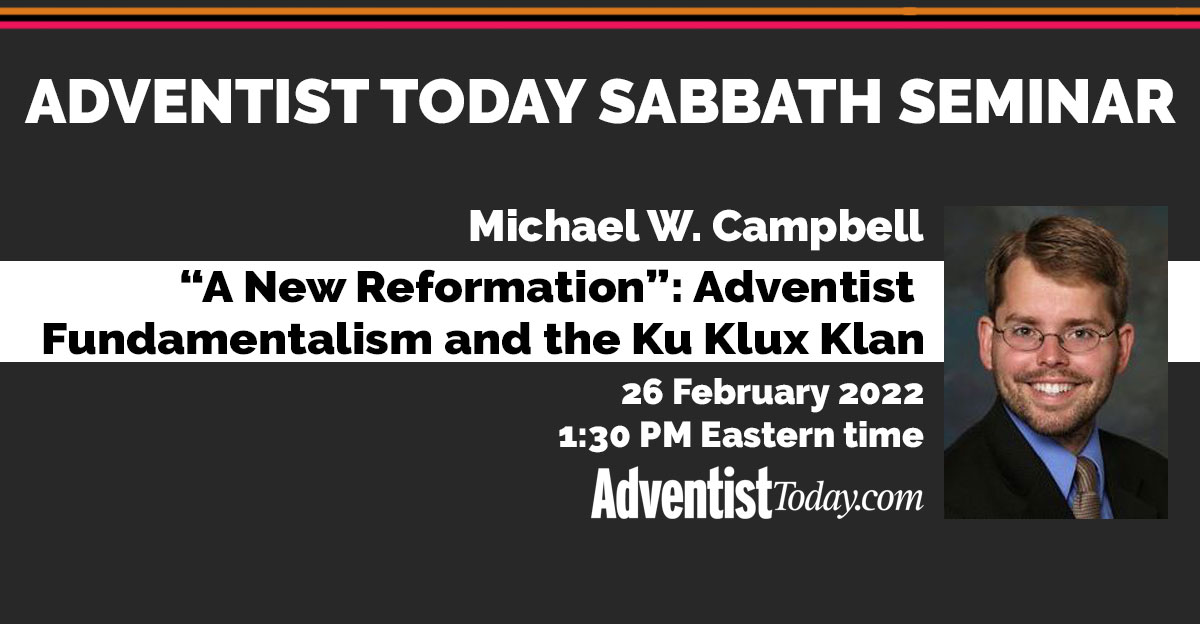 The early twentieth century was a transformative time within American religion and culture. World War I contributed to a heightened sense of militancy; as did the 1918-19 influenza pandemic that only further reminded people of their own mortality. American Christianity experienced a bifurcation between the theological modernist movement and their fundamentalist counterparts.

And around this same time, the Seventh-day Adventist Church found itself no longer having a living prophet.

Adventists shared some of these same concerns with the wider fundamentalist movement, but found themselves initially hesitant to embrace the movement, in no small part due to R. A. Torrey, one of the editors of The Fundamentals, who had earlier written a tract against Adventism. During the war, however, Adventists began to attend a series of prophetic conferences that became a model for an Adventist prophetic conference, widely known as the 1919 Bible Conference. Fundamentalist ideas began to permeate Adventism during the late 1910s and early 1920s, creating an Adventist version of fundamentalism that profoundly changed Adventism. Some of the ways it is possible to see these changes are in terms of gender and race.

This presentation will focus largely on the latter topic, specifically, how some of the leading advocates of Adventist fundamentalism began to espouse a racist theology. Some even began to argue for a segregated black and white heaven. And in a similar way, just as some fundamentalists such as J. Frank Norris drew deeply from the well of white Protestant Christian nationalism, some Adventists during this time began to associate with the Klan.

This presentation examines some of those interactions, both positive and negative, in which Adventists participated. Some even embraced the second wave of the Klan. While this may seem deeply troubling to some today, at the time and in historical context, some of these interactions need to be seen as part of a larger cultural framework. What attracted some of these Adventists to the second wave of the Klan?

This presentation furthermore explores what are these associations, not least of which was a strong penchant toward anti-Catholicism and an affirmation of private education. Together, all of these reforms were perceived as “A New Reformation” in which they were standing against huge shifts, especially with Christian nationalism, anti-Catholicism, concerns about immigration, and more. Of course, not all Adventists embraced this second wave of the Klan.

Some of the strongest contemporary opposition came from Adventists outside of North America who expressed concern, particularly about implications for race. In many ways, as Adventism became increasingly fundamentalist during the 1920s, it contributed to a reversal in race relations. Some of the early Adventist pioneers who were socially progressive and inclusive in terms of race and gender, by the 1920s began to dramatically shift, which set the stage for later debates within Adventism about race in the twentieth century. Unpacking this transition time period, as Adventists engaged with the fundamentalist movement, in conjunction with the second wave of the Klan, is an important albeit little known chapter of our Adventist past.

Michael W. Campbell, Ph.D., is professor of systematic theology and religious history at Southwestern Adventist University where he has taught the past three years. He is an ordained Seventh-day Adventist minister and served for 5½ years as a missionary, training pastors at the Adventist International Institute of Advanced Studies in the Philippines (AIIAS). He has published numerous popular and peer-reviewed journal articles about theology and religious history. He served as assistant editor of The Ellen G. White Encyclopedia (Review and Herald, 2013) and editor of The Journal of Asia Adventist Seminary (2015-2018). He is co-editor of the forthcoming Oxford Handbook of Seventh-day Adventism. His most recent book is a Pocket Dictionary for Understanding Adventism (Pacific Press, 2020). Some of his other recent books include 1919: The Untold Story of Adventism’s Struggle with Fundamentalism (2019) and The Ellen White Pocket Dictionary (2018), and he is currently under contract to write a textbook on Adventist history with Eerdmans. He co-hosts the Sabbath School Rescue and Adventist Pilgrimage podcasts. He is married to Heidi, who is a Ph.D. student in Early Modern History at Baylor University. They have two children, Emma (age 14) and David (age 12). Together they enjoy camping, gardening, bird watching, and Pathfinders.

Raj Attiken is a retired president of the Ohio Conference, now working as an adjunct professor at Kettering College.

You can watch the presentation here.