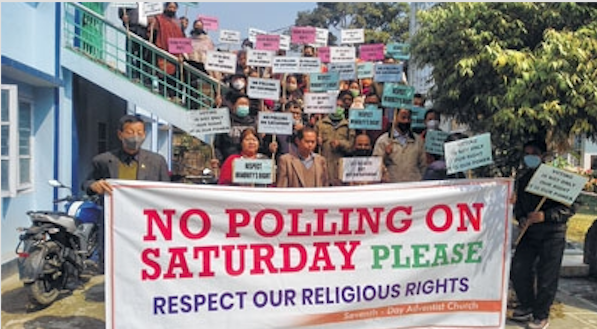 23 February 2022 | Around 30 people, many of them holding up signs, sat in protest of a rescheduled date to cast ballots in polls at the Manipur Conference Seventh-day Adventist Church in Imphal, the capital of Manipur state in northeastern India, on Feb. 21, 2022.

The scheduled voting date in that area is March 5, 2022, a Saturday. The polls are seen as a barometer of India’s Prime Minister Narendra Modi and his party’s popularity ahead of general elections in 2024, according to the Religion News Service.


Will you give a donation to Adventist Today?

Sabbath (Saturday) keepers would not be able to vote, as that is the day they offer prayers, said Lungaichungpou Golmei, executive secretary and head of the Public Affairs and Religious Liberty department for the Manipur Seventh-day Adventist Conference, reported The Sangai Express, a newspaper in Manipur.


Authorities should respect the voting, as well as the religious, rights of the people, said Golmei. A large banner at the protest read, “No polling on Saturday, please. Respect our religious rights.” Golmei called for immediate steps to rectify the situation.

Golmei urged authorities to reschedule the election date to March 7 or 8, 2022, or revert to the original date of March 3, 2022. It is unclear why the election date was rescheduled, but the Adventist church in Manipur had submitted a memorandum about the issue on Feb. 17, 2022, to the Election Commission of India through the Chief Electoral Office in Manipur.

Golmei also said the church would submit a memorandum to Modi during the prime minister’s visit to Manipur on Feb. 22, 2022.

Politically, Christians favor the opposing Indian National Congress over the ruling Bharatiya Janata Party (BJP) led by Modi, according to the Pew Research Center. The BJP is often described as promoting a Hindu nationalist ideology.

According to the 2011 Census of India, the percentage of the Manipur population that is Hindu (about 41.39%) is about the same as the percentage that is Christian (41.29%).

There are 46 Adventist churches in Manipur, with a membership of 7,126. Manipur has a population of 3,006,366, according to the Adventist Yearbook.

The Manipur Conference has seen a steady growth in its Christian education institutions, according to the Encyclopedia of Seventh-day Adventists. They include the Kingsway English School; the Manipur Boarding School, which had a 2019 enrollment of more than 800 students; and the Orion Adventist School, which had an enrollment of more than 1,000 students in 2018.

(Photo: Protesters hold up signs during a sit-in protest at the Manipur Conference Seventh-day Adventist Church in Manipur, India, on Feb. 21, 2022. Photo via The Sangai Express.)