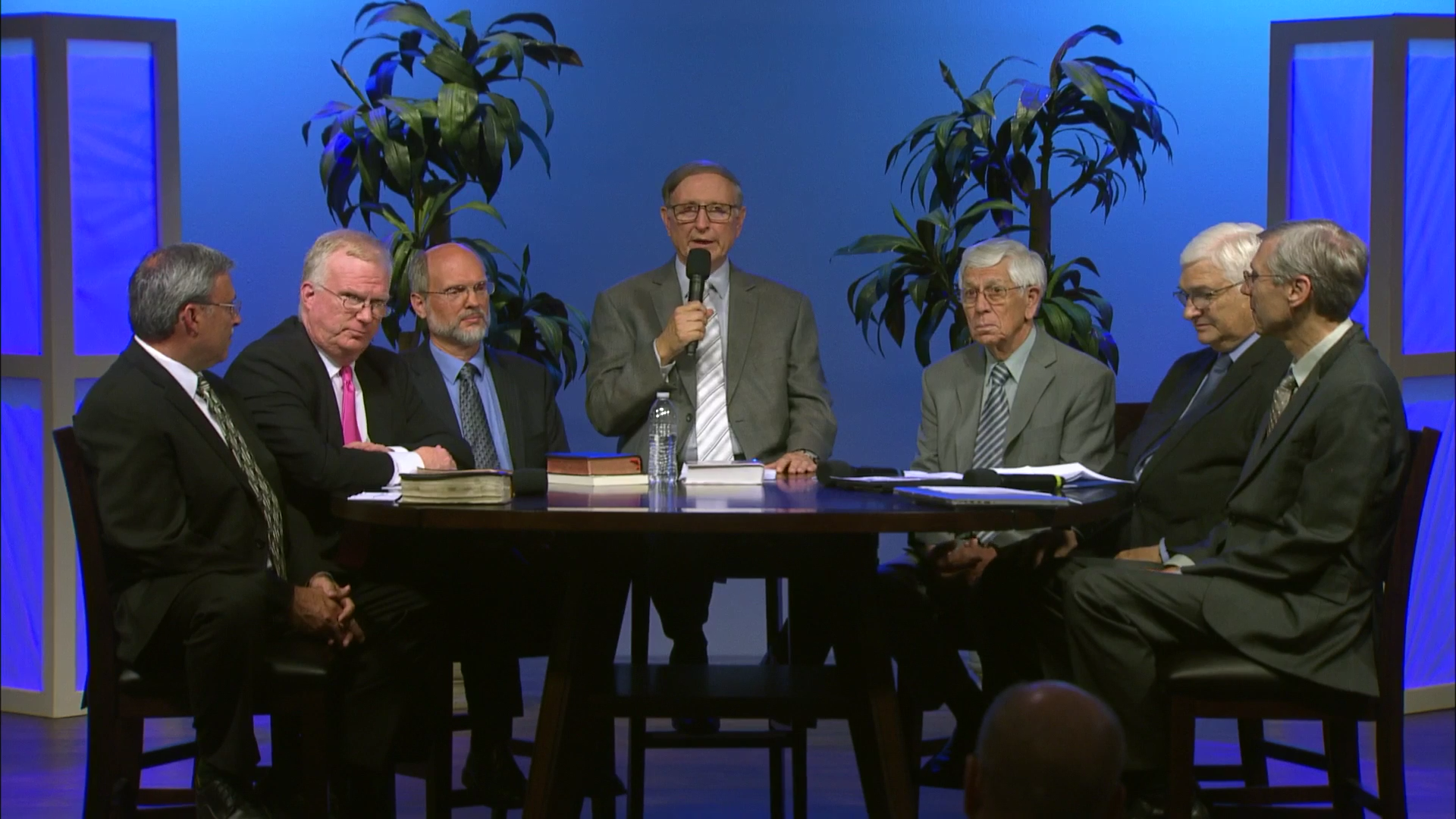 August 4, 2017:   Three days of mostly somber yet occasionally heated presentations by an all-male lineup of stridently anti-women’s ordination speakers made for a packed agenda at the Scripture, Church Structure and the Path To Unity symposium which began Tuesday and ended yesterday (August 1-3).

The event was organized by the ultra-conservative Fresno, California-based Secrets Unsealed independent ministry.

The timing of the symposium, less than two months after the Unity Conference of union conference officers from four of the denomination’s world divisions in London and soon before the October annual meeting of the Adventist denomination’s governing body, was strategic to say the least.

The group of Adventist men that made presentations in Fresno for the Scripture, Church Structure and the Path To Unity symposium were of an entirely different perspective. Their anti-women’s ordination views wildly differ from those of the majority of Adventists in the North America, Europe, Australia and some other places.

At the helm of the operation was the speaker/president of Secrets Unsealed, Pastor Stephen Bohr, who presented the keynote and only presentation on Tuesday night.

Seated at a desk between two potted plants, Bohr proceeded to address the question on the minds of many: “Why Another Symposium?”

He explained that the symposium had to happen due to what he and his fellow speakers saw as rebellion by certain denominational units against the General Conference vote against the ordination of women.

He made it clear that in his opinion, “when it comes to women’s ordination there is nothing new under the sun. All the theological arguments have been presented … ad nauseum.”

Somewhat ironically considering the content and tenor of the presentations to come, Bohr claimed that “the purpose of this symposium is not to further divide the church on the issue of women’s ordination. The purpose is to discuss and consider a firm foundation that will keep the church united upon the platform of truth as found in the Bible and the Spirit of Prophecy.”

Quite apart from the content of his presentation, this segment of the event was interesting because the advertised speaker had been Pastor Guillermo Biaggi, a vice president of the General Conference. No reason was given for his absence, although no GC officers had participated in the Unity Conference in London.

As Biaggi’s apparent replacement, Scarone discussed the reactions of various entities to the 2015 San Antonio vote.

He stressed that the church had as its foundation the Bible and implied that Adventist entities that support women’s ordination were not aligned with Scripture, despite the fact that all of the official panels appointed to study the question have found no Bible prohibition to ordaining women. He warned that “the higher organization has a responsibility to act for the protection of the loyal members and the good name of the church.”

Pastor Larry Kirkpatrick, a minister in the Upper Columbia Conference associated with anti-women’s ordination online platform Ordination Truth, was up next. His topic was “Hermeneutics and Church Leadership.” He warned of “false teachers” inside the church. He stressed that, contrary to an official request by a delegate at the last GC session, more study into hermeneutics (the methodology for Bible study) was not needed.

Looking to the future of the Adventist denomination in view of non-compliant church entities, Kirkpatrick said, “There is going to be a painful event. I am pretty sure. I hope not.” He urged swift action on the part of leadership to deal with noncompliance: “It’s not leading when you throw it down the road. It’s not leading when you appoint a new study commission.” He added that “you do not change hermeneutics in the middle of a crisis.”

Pastor Mike Lambert, the pastor of a church near Walla Walla University, followed with a talk on “Scripture and Church Authority.” Lambert emphasized the need for a biblical foundation for an understanding of church authority.

Dr. Mario Veloso, a retired associate secretary of the GC, then presented on the gender of elders in the church. He claimed that the Adventist church manual does not contain gender inclusive language when it comes to the ordination of women. He said that after votes that had allowed for the case-by-case ordination of women elders in the Adventist church, specific criteria had been established for such action.

Veloso was adamant that these guidelines were not being followed today. He went so far as to claim that some conferences were forcing unwilling churches to accept the ordination of women elders.

Kevin Paulson, a minister no longer employed by the denomination and freelance writer, followed with a fiery presentation titled “Biblical Theology of Church Discipline.”

“Sometimes when rebellion is persistent and apparently irretrievable the only way the heart of the evildoer can be reached is through a parting of company,” warned Paulson in anticipation of action against non-compliant denominational units.

Veloso was back on stage later in the day with a talk titled “That They All May Be One.” He emphasized that there was still time for non-compliant entities to return to the proverbial fold. However he warned that fighting against the GC was not the way to return. “Satan put the fighting mood in the world,” said Veloso.

On the morning of August 3, Lambert delivered a presentation entitled “Unity: At What Cost?” He argued that pro-women’s ordination arguments were not grounded in Scripture but in culture. “Unity that emphasizes using the thoughts and leadings of culture is not a unity that we want or need. It is compromise. It is sin.”

Lambert starkly laid out his perception of the direction pro-women’s ordination denominational units are pursuing. He urged all to “be careful and prayerful in our quest for unity that we do not fall into that which harmonizes right and wrong. … What communion hath light with darkness?”

In a talk entitled “Two Paths To Unity,” Veloso tackled the much-discussed topic of unity in diversity: “If the minority wants to impose on the majority of the church anything good or bad only for the sake of imposing it, you are destroying the conscience of everybody,” warned Veloso. “Let us not argue about freedom of conscience. … How could I, in the name of my freedom of conscience … express the desire that the whole church be subject to my personal conscience. What about the rest?”

Paulson followed with “Message and Mission: Internal Church Controversy and the Challenge of Distraction.” He argued that non-compliant denominational units were not focused on biblical truth: “Get rid of an absolute standard of right and wrong and every good motive that our progressive fellow Adventists have is lost because it will not last, it will not endure.”

Anticipating disciplinary measures, Paulson turned to an analogy that was not for the squeamish in discussing how to treat said progressives: “Both butchers and surgeons make their living with a knife but one cuts to heal while the other cuts to kill. We need to be surgeons and not butchers.”

“Dissolution or Revolution” was the title of Kirkpatrick’s final talk of the day. He outlined two options for the way forward: “Either working with the plan God has given us as one church or letting the body become misshapen and have subsections of the church usurp authorities designed to be granted only to the General Conference; those are our two choices.”

Calling for leadership that would carry out church discipline he said, “Such a representative leader is not popish but is God’s man. Working in harmony with the head, even Christ.”

Medical doctor and Secrets Unsealed supporter Phil Mills presented the final talk of the symposium, “The Government of God.” He said, “God’s government is not egalitarian in the home or in the church. There are gender distinctions in the leadership of home and church.” He warned that the erosion of gender distinctions in society constituted an attack on God’s principles. Mills claimed that this was as bad as an attack on the Sabbath.

Town Hall meetings concluded the symposium on both August 2 and 3. In keeping with the carefully scripted style of the event, questions were not taken live from the Secrets Unsealed studio audience or from YouTube where the event was streaming. Instead, pre-written questions were presented by Bohr to a panel made up of the speakers who reinforced the core theme of the need for clear action to address a perceived rebellion in denominational ranks.

The photo with this news report shows the panel.