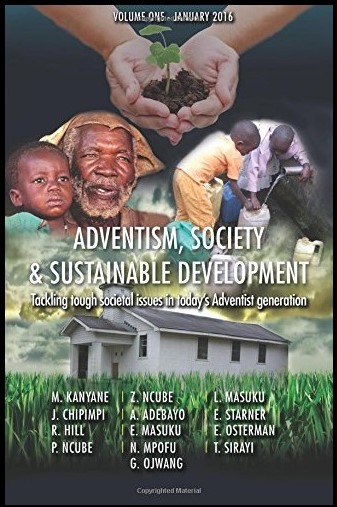 March 7, 2016:    A group of 13 Adventist academics from Africa have produced the first volume of research among and by the 40 percent of Adventist believers who live on that continent. Entitled Adventism, Society and Sustainable Development, the book focuses on a wide range of issues, including ordination and worship style. The chapters are peer reviewed and described as “ground breaking” in the Amazon book catalog. They began at a conference of scholars organized by the Adventist-laymen’s Services and Industries (ASI) of the Southern Africa Union Conference.

ASI is generally seen in North America and Europe as an association of entrepreneurs in small businesses and leaders of nonprofits that are not formally affiliated with the denomination, not an academic organization. The ASI president in South Africa happens to be Dr. Themba Sirayi, a professor at the University of Fort Hare and a noted scholar of South African culture and history who chaired the committee that developed the nation’s post-apartheid flag. He is director of National Heritage and Cultural Studies at the university which includes leadership of the Liberation Archives and an art museum affiliated with the South African National Heritage Agency.

The other authors include Dr. Modimowabarwa H. Kanyane, chief research specialist in governance at the Human Sciences Research Council and a faculty member at Tshwane University of Technology; John Chipimpi, a business faculty member at Helderberg College, one of the Adventist institutions in South Africa; Dr. Awoniyi S. Sdebayo, professor of education at Solusi University, the Adventist institution in Zimbabwe; Elisa Masuku, director of the master’s program in education at Solusi; Nhlanhla Mpofu, a PhD candidate in English at the University of Pretoria; Dr. Leonard Masuku, dean of the religion faculty at Solusi; Dr. Eurydice V. Osterman, a Fulbright Scholar and published composer who has served as chair of the music department at both Northern Caribbean University and Oakwood University; Dr. Gilbert Ojwang, a biblical studies scholar in the School of Religion at Oakwood University; Dr. Eva Starner, a scholar who studies family life; Dr. Roland Hill, a writer on economics currently a pastor in the Allegheny East Conference in the United States; Dr. Peggie Ncube, a professor and researcher in Zimbabwe; and Pastor Zebron Ncube, who served as a religion professor and conference president in Zimbabwe and is now a pastor in the Lake Region Conference in the U.S. Five of the 13 authors are women.

The last two papers in the book attempt to build bridges on the topic that has most alienated Adventists in Africa from Adventists in North America and Europe; ordination and the role of women in the church. “Women in Ministry at Issue” by Sirayi seeks to summarize the various arguments over recent decades and prepare the ground for “Women’s Ordination in Search of Consensus” by Ojwang. This final chapter in the book puts forward a proposal to bridge the differences that have become well established.

“This chapter is not another study of why or why not to ordain women,” states the editor in an introductory summary. “Nor is [the] focus on the weaknesses of the arguments on either side, but rather [it seeks] to provoke the discussion to yet another level with the proposed dual model of ordination to accommodate consensus.” The writer “maintains that the issue is not about women’s ordination or ordination motivated by misogynistic bias … but what matters most is the issue of ordination to delineated functions.”

Other topics include an analysis of Adventist schools in a local conference in South Africa, the motivations for and barriers to Adventist young adults pursuing higher education in Africa, economic freedom for Africans, the role of Christian universities in sustainable development, immigration by Adventists in and from Africa, academic inbreeding in Adventist institutions of higher education, home schooling, faculty credibility in Adventist colleges and universities, authority and leadership in practice, how parental divorce impacts Adventist young adults and their future church membership and music styles in Adventist worship. Each paper presents information about which little has been published to date.

The book is a little over 300 pages and just off the press March 1 from Reach Publishers. It can be purchased from Amazon either as an eBook or paperback. It may help international purchasers to know that the ISBN for the book is 0620680059 in English.