Adventism: Its Challenges & Opportunity within the Global Community 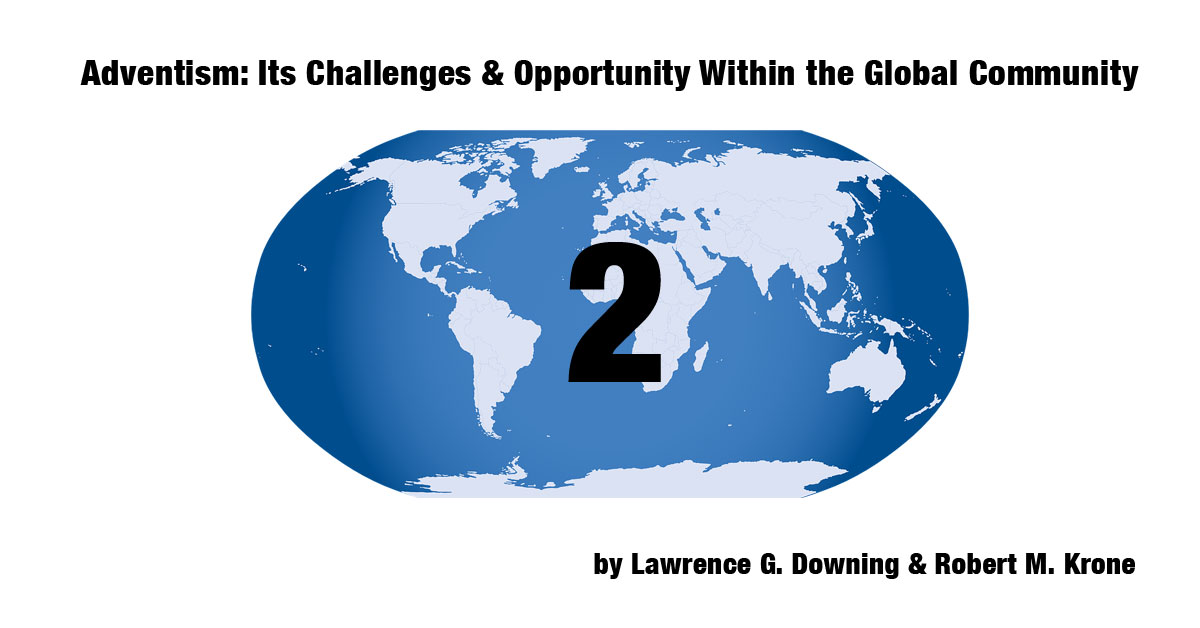 The Adventist educational and ecclesiastical systems face the challenges inherent in the 21st century that any other contemporary organization must address. It is a particular imperative, as a world-wide religious entity, that the Adventist church establish and maintain moral and ethical standing among its own people and the world’s peoples. The church can add its own answer to the question Nietzsche first asked in 1874: “And to what should ‘The Human’ as a whole—not any longer a people, a race—be educated and chastised?”(1) When British scholar Sir Geoffrey Vickers in the 1960s observed that reactions to events that randomly occurred did not result in creating progress he described humanity as historically reaching “the end of free fall.” (2)

A proactive policy culture has emerged over the last 200 years. But the “survival of the fittest” paradigm of Darwin persists. We share the view of others, who believe that without a change in that paradigm the survival of humanity over the next 50 years is in doubt. (3) Defining, researching and teaching that new paradigm will be the task of education.

We believe that the Adventist church, with its global educational system, has the foundations and the global experience and structure to be a significant leader within the global community to counter the downward moral spiral that is evident around the world. The goal will be to ever move toward increasing “The Human Use of Human Beings.”(4) It is our hope that others will agree and take meaningful action that will accelerate the dialogue toward that goal.

The millions of Adventists around the world can provide evidence enough that the church will respond to the needs of global humanity. Our intent, within the context of an ever-increasing need, is that we further capitalize on these successes. We are confident that the Adventist church, united by its belief system and empowered by its ability to achieve consensus on important issues, can be an energizing force within the global community. In this capacity, the church is called to practice moral leadership. Decisions and actions taken by current Adventist leadership have fallen short in this essential component.

Education is the ultimate skill of civilized humanity. The arts reflect humanity. Science increases our knowledge and researches our environment and the changes that affect human life. Education facilitates a very small percentage of the people to be catalysts for humanity’s progress. The challenge for education is to be the foundation for what an increasing majority consider “good.” The record to date does not adequately fulfill that requirement.

A simple algorithm to show the basic goal of theology and education is:

Or: Improvement equals increasing the ratio of “Building” to “Destroying” over time.

A ratio of 1.0 indicates that building and destroying are in equilibrium. A number higher than 1.0 indicates building exceeds destroying. Reviewing global history since the first coming of Jesus produces uncertainty about humanity’s total record with that ratio. And global events at the beginning of the 21st century are increasing the destroying denominator. This is a depressing fact after the optimistic hopes for this new millennium, as the old one ended, were for a bright new 21st century.

Increasing global thinking and actions while not destroying national and ethnic cultures is a huge challenge. So we ask: How can a new paradigm for education produce improved quality of life for all those now in a sea of misery? We take the side of Yehezkel Dror when he says that the capacity to govern must move from “raison d’état” to “raison d’humanité.” (5) This is consistent with the teachings of Jesus and Christian theology.

Current thoughts of the authors on issues which should be part of the new open dialogues in Adventist schools and churches follow below. A 100% initial commitment of Adventists to these issues will not be necessary. We believe a dedicated small percentage of education and church leaders have the potential to be the successful catalysts for an open exchange of ideas which could produce long-range benefits for the church and the nations where our churches are found, and for resolution of global problems.

The business world offers the means to obtain the requisite skills. The church can call upon qualified men and women to design a new “business theory for the church.” Those centers might best be located within the Adventist schools of business and management.

The above identifies but minuscule segments of much larger challenges that confront the global Adventist church as it confronts the 21st century. How might the church most effectively and responsibly apply its considerable resources and opportunities to further and enhance God’s kingdom? Time and events will provide answers. For the moment, the evidence bends toward the tightening of a fortress mentality model.