Adventism: Its Challenges & Opportunity Within the Global Community 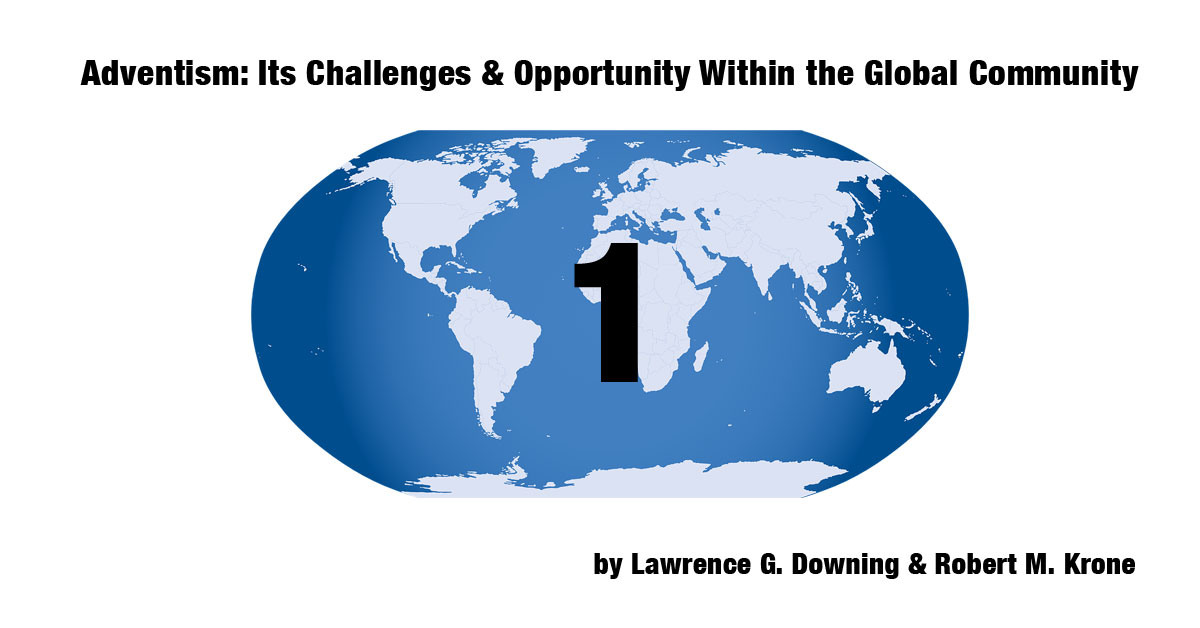 by Lawrence G. Downing & Robert M. Krone, June 26, 2017:     The contemporary political situations that rile nations and people have had profound and lasting change on the world’s governments, organizations and institutions. Our global community has been shaken to its core. Here in the United States, the violent acts of a few have had dramatic impact on the many. In response to the upheavals, business, religious and political leaders have too often demonstrated moral and ethical failure. The Adventist church is not exempted.

In addition to the unease created by the turmoil in the global political world, threats and violent acts by extremist groups have caused panic and resultant irrational and hurtful decisions. In the midst of the turmoil, we have watched as high profile business and political leaders have been accused and convicted of heinous crimes. Political leaders have proposed numerous safety net solutions that too often proved ineffective. The moral failures among the clergy add more stress to an already disrupted society. People wonder if things will ever get better. Few answers are put forward that hold promise for a brighter day to come.

It is not our purpose to offer solutions designed to solve the world’s problems. Rather, our intent is to invite the reader to consider ways that hold possibility for us to be effective moral agents equipped and willing to address some of the pressing problems that arise from within this global community. We will lay out a set of issues and subjects that we believe may open the way for discussion and present research that may be an avenue for dialogue to encourage and assist people as they respond to the accelerating changes, many of them negative, which have affected our world.

An essential part of this discussion will center on the importance of moral leadership. A society in turmoil offers to moral leaders, who are prepared and willing to step forward, a unique opportunity to make the world a better place, a place where people are provided resources to live a better life. Within the context of turbulence, there is high potential that the leaders who call for superior behavior will be heard. We believe that educational and religious leaders are the appropriate ones to initiate and lead in the initial discussions that address these matters.

A society in turmoil offers to moral leaders, who are prepared and willing to step forward, a unique opportunity to make the world a better place, a place where people are provided resources to live a better life. Within the context of turbulence, there is high potential that the leaders who call for superior behavior will be heard. We believe that educational and religious leaders are the appropriate ones to initiate and lead in the initial discussions that address these matters.

The issues involved in this discussion are complex, controversial and difficult. Each has serious long-range impact. We do not believe it is prudent or necessary that the Adventist church make policy on these issues now. Rather, we offer this set of subjects with the hope they will serve as a catalyst that leads to an open discussion among those who work in our schools, churches and institutions throughout the Adventist global system.

We suggest that the issues confronting the global community deserve an in-depth examination by our most creative minds. The various acts of violence around the world lead to a clear understanding and consensus of “WHAT WE ARE AGAINST.” We are against the greed, exploitation, and unethical behavior that exacerbated the present political and social debacles. The events associated with the rancor between and among the nations and peoples of this world are a wake-up call for U.S. leadership to achieve an unprecedented consensus among the nations to unite against those who practice and perpetuate these horrific and inhuman behaviors. What is not so clear–and is the major focus of this paper–is this: “WHAT ARE WE FOR?” We believe that there are good reasons for a new dialogue to begin that seeks answers to this question.

We believe that the global Adventist church is well situated to address these matters. It is therefore important to emphasize the Adventist theological foundations that promote and practice “Good” through: 1) the practice of Kingdom Ethics; 2) the teachings of Jesus; and 3) service to humanity. It is our concern that we translate these basic beliefs into verifiable and meaningful actions. Within the context of the global society we want people to see that our beliefs make a positive difference. We believe we can achieve these goals if we place greater emphasis on: 1) clarifying our religious essentials; 2) demonstrating the positive contributions Adventists make to global humanity; 3) practicing moral leadership. Readers will note the authors’ bias toward the conclusion that inaction is not an option for the Adventist global system. We also recognize that, in its present situation, the church directs considerable emotional and psychic resources toward matters that have minimal, or no, impact beyond denominational boundaries. If the church is to have a role in the 21st-century world, we believe it essential that church leaders take immediate action to implement moral and ethical practices that are consistent with Jesus’ teachings and practice.

Those who seek to prepare Adventist men and women to have a credible voice in the 21st century will share many of the same challenges that have confronted educators in previous years, plus several issues that will take on more dominant importance. Credibility is a major requirement for any public organization, especially a religious entity, if it is to have the respect and standing that is needed in today’s world. The web and email have made instantaneous person-to-person communication a reality. It is not possible for an organization to hide.

It is imperative for a religious body that seeks to attract and maintain thoughtful people to avoid obfuscation and hold to a high moral value and to practice ethical behavior. When a faith-based organization permits or encourages actions or beliefs that violate moral tenets, the lapses will be widely disseminated with negative results. Adventist educators will therefore need to teach and practice moral values and exemplify Christian ethics. They must equip students with the skills and determination to practice these values in their personal and professional lives. In a like manner, church officials will need to hold to high moral and ethical standards.

The Adventist educational system, in particular, lends itself to capitalize on its global position. This unique position enables the educational system to transcend parochialism, turf protection, and hoarding of resources–both financial and human. They can then move to create a model that will instruct others.

The give-and-take that will occur among the global Adventist educational institutions, should they choose to implement their potential, will enhance and multiply the effectiveness of each organization. The shared wisdom that each organization contributes will serve to limit the negatives and enhance the positives. Each institution will learn to focus on the changing future. A combined resource will move the individual institutions from a position of passive observer to that of a participant leader. At the center of all the action will be the acceptance and practice of the values that define and guide the overall structure. These values stand as assurance that there is adherence to mission and will limit deviation from the goals and purposes for which the organizations exist.

Lawrence Downing, DMin, is a retired pastor. He served as an adjunct instructor at La Sierra University School of Business; the School of Religion and the Adventist International Institute of Advanced Studies in the Philippines. He was a contributing author to Beyond Earth: The Future of Humans in Space and Values Analysis for Moral Leadership, available as a free download from BookBoon.

Robert M. Krone, PhD, is an Emeritus Professor of Systems Management at the University of Southern California; a Distinguished Visiting Professor for Strategic Management in the School of Business at La Sierra University; and Adjunct Professor for Doctoral Programmes, International Graduate School of Management at the University of South Australia. His Ph.D. from the University of California at Los Angeles (1972) was in Political Science and Policy Sciences. He is also active in the U. S. Space Development Community and was editor of Beyond Earth: The Future of Humans in Space and contributing author of Values Analysis for Moral Leadership, available as a free download from BoonBooks.