Tony Romeo, Adventist Pastor and Activist in Manhattan, Passes Away 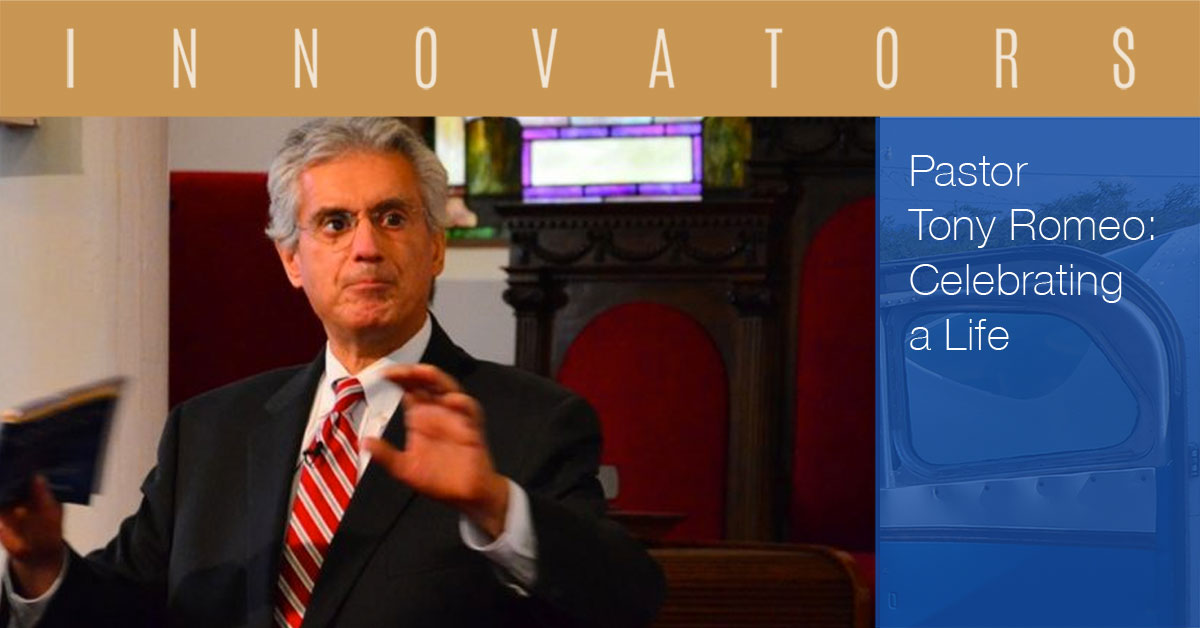 By Jiggs Gallagher, June 24, 2017:      Tony Romeo, pastor of the Historic Manhattan Seventh-day Adventist Church on 11th Street in Greenwich Village, passed away on Friday morning in suburban New York City. He was 69.

A native of New York City from an Italian-American immigrant family, Romeo led a colorful and talented life. Growing up in the Bronx, in a mixed Adventist/Catholic home, he embraced the Adventist faith. He had two passions as a child and young man. One was art and design, with a specific goal to enter the advertising industry often called “Madison Avenue,” where all the big agencies were located in Manhattan. That path took him to the public High School of Art and Design, college at the New York School of Visual Arts and finally to Atlantic Union College (AUC), the Adventist institution in Massachusetts, where he earned a degree in religion in the late 1960s. As a college student, he developed his second great passion: he wanted to serve in the ministry. He would do so as a layman, on and off, all through his advertising career, and finally as a full-time pastor and counselor after his retirement from advertising at age 60. He was ordained by the denomination’s Greater New York Conference.

“My mom passed away when I was three years old,” said Romeo in an interview last year. “I had challenges in my childhood, including losing an eye at a young age.” For the rest of his life, he had an artificial eye, leading him to write a recurring commentary online, “Looking at the World through a Glass Eye.”

After graduation from AUC Tony got a job in the art department at the Review and Herald Publishing Association in Washington, DC. He spent only eight months there, in the early 1970s, and then moved on to the world of New York ad agencies. He toiled in the bullpen at Grey Advertising (now the Grey Global Group). “I was creating ‘mechanicals,’ in the days before computers. I was also breathing a lot of second-hand smoke, as the only non-smoker in a tightly packed space.” That experience, and some later risky photo shoots where microscopic particles were blown by fans for the filming of a commercial in Los Angeles, may have contributed to a form of non-smoker’s lung cancer from which he suffered for the past several years.

Romeo moved to Scali McCaffrey Sloan (SMS), another large New York agency known for their account with Swedish automaker Volvo. Finally, he spent years at Doyle Dane Bernbach Advertising (now DDB Worldwide), moving into the creative side and management. In all, Tony spent about 35 years working in the ad field.

At the same time, he often performed volunteer work for the Adventist Church as a lay preacher. He was invited to go to Kenya and preach an evangelism campaign. Other opportunities to speak, write and counsel others were precious to him.

In 2008, Romeo became more active as a guest speaker in churches and at meetings, and decided he wanted to move into the ministry for the rest of his career. He knew with his no-holds-barred attitude and straight-forward personality, it wouldn’t always be an easy ride. “My thinking is ‘out of the box,’” he confessed. “Sometimes I just have to learn to keep my mouth shut. I’ve rubbed shoulders with all kinds of people in the ad business, with New York Italians, Catholics, Jews, everybody. It sharpens your wits. Sometimes I don’t have a lot of patience with church politics, especially on the administrative level.”

Eventually he was hired as pastor of the Manhattan Adventist Church in Greenwich Village, a position he held until his death. He added the name “Historic” to the church’s title because the building was erected in 1888 with a donation from a famous American family and has been a fixture of Village life for nearly 130 years.

Romeo was the consummate missionary to Manhattan. He worked hard to be inclusive in his ministry, welcoming people of all denominations, including lesbian, gay, bisexual and transgender (LGBT) people. “I believe in the gospel as Jesus Himself preached it, not as we sometimes change it to fit our institutional needs,” he said. This often led to criticism from conservative members of his congregation, even to the point of one person labeling him a “secret Jesuit” for working with a local Catholic group in the Village to serve the homeless.

A major outreach legacy Romeo created, several years ago, is Reach NYC. The ministry is separately incorporated as a 501(c)3 organization. They sponsor cultural programs, drawing audiences of as many as 300 to classical and religious concerts, as fundraisers for many charities in Greenwich Village.

When he realized he was facing a major health crisis last year, he said, “I’m not sure where I will go from here. I want to spend my time on Earth doing Christ’s work.”

Romeo is survived by his wife, Marlene, daughter Jennifer and son A. J. The family plans a memorial service, probably at the Historic Manhattan Adventist Church in Greenwich Village, sometime in the coming month.

Jiggs Gallagher is a senior editor for Adventist Today and teaches journalism for California State College. He was a personal friend of Tony Romeo.