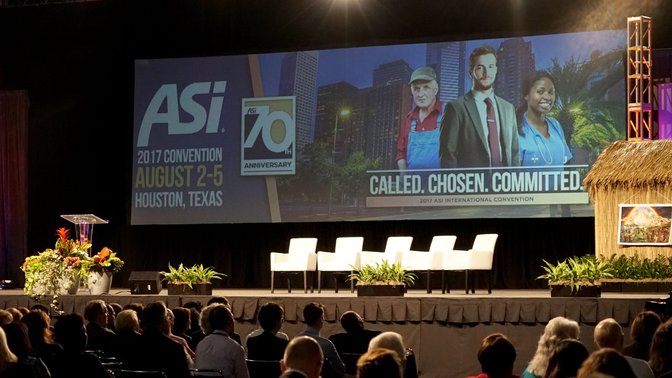 From ANN, August 9, 2017:      About 1,700 Adventists gathered last weekend in Houston, Texas, for the 70th annual convention of the Adventist Laymen’s Services and Industries (ASI) organization in North America. The association represents business owners, self-employed professionals and nonprofit agencies that are not legally linked to denominational control and were once known as “self-supporting” ministries.

They came to share their expertise, promote their products and projects, and network with other like-minded church members. The crowd included seniors who have spent their life in their ministry and young adults with a new entrepreneurial commitment.

Whatever their age or occupation, all of them shared a common goal; to use their businesses or nonprofit organization to share the good news about Jesus with their customers, clients and colleagues. “No matter what we do, our goal is to ‘share Christ in the marketplace,’” said ASI president Steve Dickman. “It is what we live for.”

Some of the young entrepreneurs were given an opportunity to pitch their projects at “Fruition Lab,” a session which featured creative exchanges between experienced innovators and business newcomers. The goal is to “provoke creativity, ideas, actions, and new partnerships,” said organizers. “We believe all were created to create, and believe in making friends, not contacts.”

The preacher for the Sabbath worship service (August 5) was Voice of Prophecy director Pastor Shawn Boonstra. In the afternoon an anniversary program reviewed the beginnings of ASI and show how its mission and vision has expanded around the globe. It has become an important sector in the Adventist movement around the world.

The Adventist Review later reported that the offering taken on Sabbath was estimated to total $1.85 million and it will go to 42 projects being implemented by independent ministries around the world. The largest share (at least $500,000) will go publish picture rolls, an old technology which is no longer used in Sabbath School classes but is, according to the Adventist Review, still needed in rural areas of developing nations in Africa and elsewhere. Contemporary art is being produced for this project by Adventist artists such as Nathan Greene.

The Adventist News Network (ANN) is the official news agency of the Seventh-day Adventist denomination. This news release was based on a story by Marcos Paseggi, a staff writer for the Adventist Review. The featured photo was supplied by ANN and shows the stage for the event.