A Response to “Ellen White, the Bible, and Persistent Hermeneutical Confusion”

I am responding to Loren Seibold’s “Ellen White, the Bible, and Persistent Hermeneutical Confusion.” And while I agree with much of what Loren said, I do have some reservations.

I’ll begin with the list of seven ways to regard the writings of Ellen White, none of which reflect my understanding, though number 4 comes the closest. Recently I read Jud Lake’s book, Ellen White Under Fire, and I find his definition of inspiration and revelation as they relate to Ellen White’s writings the best I have read anywhere. Lake says that we cannot spell out degrees of inspiration. Either a person who has the gift of prophecy is inspired by God or they are not. Ellen White’s inspiration is no different from that of the biblical prophets. Either God revealed certain things to Daniel, John, Paul, and Ellen White, or He did not. I agree with Lake.

However, Lake says that there are degrees of authority. The highest level of authority must be given to the Bible and its writers, because the Bible was given for all people at all times and under all circumstances. Ellen White’s authority is subordinate to that of the Bible. She herself made that very clear throughout her 70 years of ministry. Ellen White’s writings are directed especially to the Seventh-day Adventist Church, and they are inspired writings whose authority all Seventh-day Adventists should respect.

Mark of the Beast

Regarding the mark of the beast and Sunday laws, Ellen White was not the first Adventist to propose this idea. That honor goes to Joseph Bates, who articulated it in the second edition of his book, The Seventh Day Sabbath a Perpetual Sign. However, Ellen White immediately picked up Bates’s interpretation, and it was a part of her end-time scenario for the next 70 years of her prophetic ministry.

Loren is correct that the United States and the Vatican are not mentioned in Revelation. Of course they aren’t! These two entities didn’t exist at the time John wrote his prophecies. He gives us symbolic predictions about future powers that would come to exist toward the end of world history. And the symbols and details that Daniel and Revelation provide about these two powers clearly point to the Vatican and the United States.

So how do we get Sunday laws out of Revelation 13 and 14? I will make the following four suggestions.

First, it is utterly clear that Revelation’s mark of the beast is related to a false form of worship. The word worship appears eight times in Revelation, and in seven of those occurrences it refers to the false worship of the beast that rises from the sea (Revelation 13:4 [twice], 8, 12, 15; 14:7, 9, 11). The one place where the word worship refers to the worship of the true God is Revelation 14:7. The last part of the first angel’s message says, “Worship him who made the heavens, the earth, the sea and the springs of water.”

Second, many years ago Jon Paulien pointed out that Revelation contains hundreds of allusions to the Old Testament, but nowhere is there an exact quote. The closest Revelation comes to an exact quote is this reference to the word worship in the first angel’s message, and it’s the last part of the fourth commandment in Exodus 20. Therefore, it’s very clear that the first angel in Revelation 14 is telling God’s end-time people that they are to proclaim the biblical Sabbath to the world. The fact that Sabbath observance originated at Creation and that it’s repeated in the fourth of God’s commandments makes it a universal weekly celebration for all time. That is the true worship that Revelation 14 speaks about.

Third, while Revelation does not explicitly say what the false form of worship is, I think it’s reasonable to assume that it’s a false form of the true worship that’s described in Revelation 14:7:

He said in a loud voice, “Fear God and give him glory, because the hour of his judgment has come. Worship him who made the heavens, the earth, the sea and the springs of water.”

In that verse it’s very clear that true worship is the observance of the seventh-day Sabbath. Therefore, the false worship must be a counterfeit of that, and the observance of Sunday on the first day of the week contrary to the fourth commandment is clearly the most likely candidate. And the fact that the inspired writer Ellen White supported this view of the mark of the beast during her entire 70-year ministry makes it one of the most certain of all her predictions.

And fourth, the end-time scenario described in Revelation 13 and 14 is bracketed at the beginning and the end with a command for God’s people to keep His commandments. Those brackets are Revelation 12:17 and 14:12. Therefore, it’s very reasonable to understand that God’s commandments–all ten of them–will be a critical issue at the end of time. And the observance of the fourth commandment is certainly a critical issue given that almost the entire Christian world has chosen to observe the first day of the week instead of the first.

Very near the beginning of her prophetic ministry Ellen White adopted the interpretation that the mark of the beast is Sunday observance when it is enforced by law, a view she held to the day she died. Her books Early Writings, The Spirit of Prophecy, vol. 4, and The Great Controversy go into great detail about this, especially The Great Controversy. So how does that square with the fact that the observance of Sunday when it is enforced by law is not stated in so many words in Revelation?

The real issue is this: did Ellen White indeed receive the gift of prophecy? If she did, then what she said about Sunday laws at the end of time is as valid as anything any biblical prophet ever wrote. She lived near the end of time, when the two beast powers of Revelation had fully developed, and for 70 years she was emphatic that the mark of the beast is the observance of Sunday when it is enforced by law.

And because I believe that God spoke to His end-time people through her, I am compelled to accept what she wrote about future Sunday laws as a message from God that we must pay attention to. 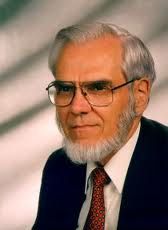 Marvin Moore is the editor of Signs of the Times magazine, and author of numerous books about end-time events. He and his wife, Lois, live in Caldwell, Idaho.