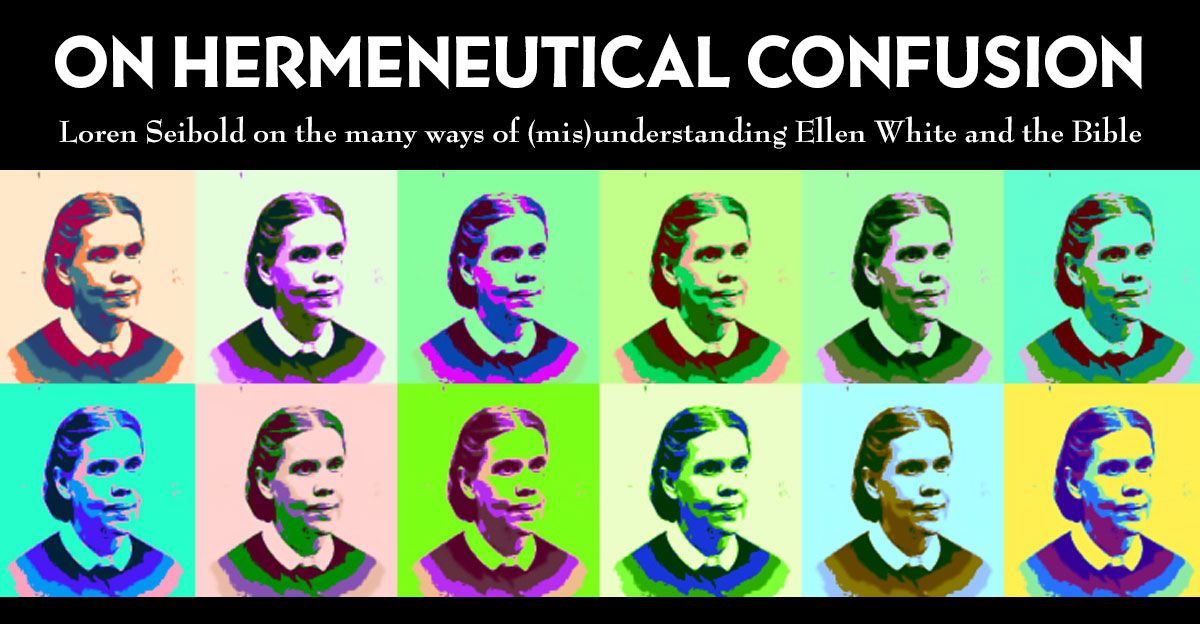 A few weeks ago I wrote an essay asking whether the Sunday law scenario, so beloved of traditional Adventist eschatologists, was biblical. I was careful to say that I wasn’t questioning the Sabbath or the change of the Sabbath, and particularly to remind everyone that Scripture warns us that our faith is often under threat from earthly power structures. This last, of course, is an inescapable biblical theme, since much of the New Testament was shaped by the Roman empire’s opposition to Christianity. The prophecies that we attempt to apply to our time had an immediate application to the early Christians who were facing persecution for, among other things, their unwillingness to regard the emperor as a deity.

Some of our pioneers’ fears were understandable in the 19th century, when Sabbatarians saw that their alternative day of worship raised strong objections from other Christians, as well as from lawmakers who wanted to legislate religious practices. There were also cultural reasons—notably pervasive societal prejudice against Irish and Italian immigrants—why they demonized the Roman Catholic faith and its leaders.

Yet I say again: while Revelation 13 and 14 describe situations that threaten Christians’ liberty to practice their faith, nowhere in the Bible is the Sunday law scenario from The Great Controversy specifically delineated. This belief, and many other Adventist eschatological and behavioral beliefs, would not be discoverable without Ellen White.

As a church, we are free to use the writings of Ellen White however we want to. But what I became aware of as I monitored the discussion about Sunday laws was that many Adventists know what they believe, but appear confused about the source of those beliefs. Even pastors scolded me for saying that The Great Controversy’s scenarios aren’t spelled out clearly in Revelation 13 and 14. Yet when I asked them to prove it to me from the Bible alone, they just gave me the familiar prophetic concepts as interpreted by Ellen White, as though they didn’t know the difference between the Bible and The Great Controversy.

This is embarrassing coming from men and women with seminary degrees.

How do we interpret Ellen White over against the Bible? Though the church has made hermeneutical statements about Ellen White, in practice our range of acceptable methodologies extends beyond the borders the denomination has set. Below I attempt to lay out a rough scale of the various ways we Adventists regard the writings of Ellen White.

Again: we Seventh-day Adventists are free to decide not only what we want to follow as authoritative sources, but the hermeneutic we want to use with them. I suspect that the majority view here in the North American Division would fall somewhere around numbers three, four and five, though I have met people on either end of this scale, too.

But what’s the right way?

Sometimes Ellen White demurred when called a prophet, and lifted up the Bible. Those who value a Bible-based Adventism often remind us that she said she was the “lesser light” directing us to the “greater light.”

At other times she was forceful with her prophetic authority: she berated by name church leaders who failed to accept her instruction. Her publishing humiliating private “testimonies” against believers, publicly exposing secrets that “the Lord has shown me,” has always seemed to me a kind of religious bullying. (A prominent Ellen White scholar said to me once, “We have no idea how many of the subjects of these testimonies just walked away from the church in disgust when they saw intimate accusations against them printed and sold.”)

Church leaders were divided about what to do with her. After her death A. G. Daniells, W. W. Prescott and others at the 1919 Bible Conference raised concerns about the limitations of her inspiration. Others, like Stephen N. Haskell, seemed at times to regard her as verbally inspired, implying that the extent of her inspiration surpassed her own understanding of it. It is probably to this latter view that we owe the near-canonization of Ellen White’s writings after her death, when she was no longer present to dampen believers’ expectations of her.

The Bible, or Ellen White?

The problem I’m addressing here isn’t Ellen White. The problem is confusion about the source of our beliefs. A great many things that Adventists believe are not in fact explicitly biblical: they are supportable only if explained by Ellen White. I say again: you are free to craft your biblical theology using Ellen White’s interpretations, but you cannot at the same time say you believe in the Bible and the Bible alone. If you are bound to follow Ellen White’s interpretation and cannot vary from it, then you are not in fact following the Bible alone.

That is not to say that Ellen White’s contributions are necessarily proscribed by Scripture. Revelation 13 and 14 can be used as a scaffold upon which to hang a narrative of Rome and the United States as persecuting powers, the Sabbath as a testing truth, and possible persecution of Sabbath keepers. But the United States and the Vatican aren’t mentioned by name in Revelation, nor a time period specified. For that matter, we only infer the Sabbath from those passages; the word isn’t used. We need the meanings Ellen White assigned to these symbols in order to establish these beliefs.

I agree with my friend Jon Paulien when he says, “Seeing Sunday laws in Revelation 13 is exegetically defensible, but it is not exegetically compelling. The mark of the beast concept is open-ended enough to allow God the freedom to fulfill the prophecy in more than one way.”

Others of Ellen White’s unique teachings, though, are more difficult to hold without admitting that we are altering (sometimes subtly, sometimes violently) our interpretation of the Bible to preserve Ellen White’s meaning.

Revelation 12:17 can be linked to the King James translation of Revelation 19:10 to make the case that the Seventh-day Adventist denomination is God’s only true church. Yet even if it seems clear to you that “keeping the commandments of God” is the rediscovery of the Saturday Sabbath, and “the testimony of Jesus” refers specifically to Ellen White, it is not obvious that Silver Spring and the rest of our wealthy and massive organization is the small remnant of patient persecuted saints described in Revelation. To make that connection, we must rely on Ellen White.

Passages like 1 Corinthians 10:31 and 1 Corinthians 6:19-20 are frequently used to support the health message, with particular focus on vegetarianism. But vegetarianism as a spiritual requirement is never made specific in the Bible as it is in Ellen White. I think you can make a strong argument that you have to sideline some significant texts, such as Romans 14 and Mark 7, in order to make the case for religious food rules. It’s nearly impossible to dodge the simple meaning of Romans 14:17: “For the kingdom of God is not meat and drink; but righteousness, and peace, and joy in the Holy Ghost.”

Some Adventists torture out of Revelation 22:11 and Matthew 25:1-13 a prophecy of a probation that closes all at once for living people before Jesus comes, and leaves believers suffering without a mediator until He appears in the clouds. But inasmuch as the context of Revelation 22:11 is life after the establishment of the earth made new, it requires some significant rearranging of the text. You need Ellen White to tell you that this post-new earth passage can be plucked out of its setting to describe an event before the second coming. As for Matthew 25:1-13, the same warning applies to this parable as applies to the rich man and Lazarus: be careful of how much doctrine you derive from the details of a parable.

I ask only one thing of my friends who believe and preach these traditional interpretations: know where your beliefs come from. Acknowledge that Ellen White is the source of them, and that you regard her as having sufficient authority to establish beliefs that aren’t explicit in the Bible.

(I could also wish that you wouldn’t deride those who come to non-Ellen White-backed conclusions in their Bible study—though that may be asking too much of you.)

But please don’t confuse people by telling them that beliefs that rely on Ellen White’s writings are self-evident in the Bible when they are not.