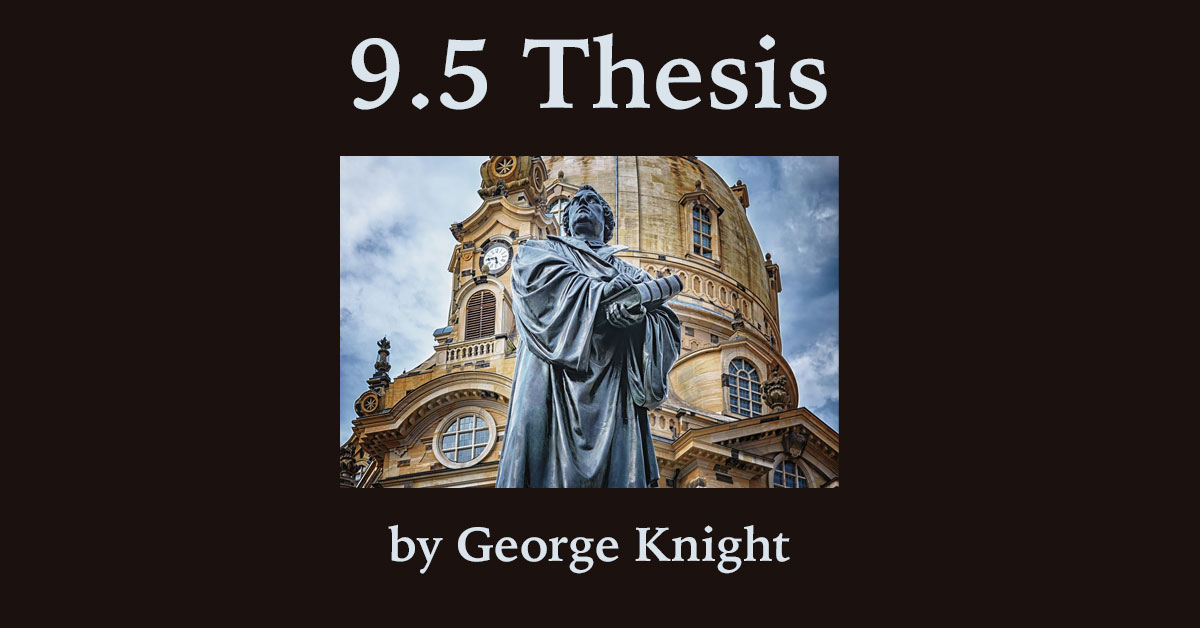 The papers of The Unity Conference have been released. But here, with his own peculiar numbering system, is George Knight’s contribution to Luther year. Read his entire paper here—it’s worth it. Excellent! —Loren Seibold

In the spirit of Luther Year and the General Conference president’s call to be faithful to the principles of the Reformation, I am offering my own 9.5 Theses (I do not have time for 95). But first I want to point out that there are times for soft words. But there comes a time, as Martin Luther discovered, for firm ones. Like Luther, I love my church and hope for its reformation. I believe that Luther wrote his propositions with love in his heart. And I can assure you that I do the same. I really desire to see healing. Here are my 9.5:

1. The only basis for Christian unity is Scripture, trust, and the love of God.

2. The Church Manual makes it clear that the General Conference is the “highest authority” for the world church, “under God.”

3. It is God who calls pastors. All the church can do is to recognize God’s call by the laying on of hands.

4. Ordination is not a biblical topic. (The passages using the word in the KJV generally mean to appoint or consecrate.) From the position of the Bible there is absolutely no difference between ordaining and commissioning.

5. For Adventists the Bible is the only source for doctrine and practice. An appeal to policy is not an appeal to the Bible. A vote by a General Conference session is not equivalent to Bible evidence.

6. On issues not definitively settled in the Bible, James White utilized the only possible way forward in unity of mission when he moved from a hermeneutic that stipulated that practices must be expressly spelled out in the Bible to a hermeneutic that held that practices were permissible if they did not contradict Scripture and were in harmony with common sense. (The new hermeneutic made it possible for the Sabbatarian Adventists to organize as a denomination.)

7. The so-called noncompliant unions are not out of harmony with the Bible.

8. Adventism has moved at times from being a church based on Scripture to one based on tradition and ecclesiastical pronouncements.

9. The General Conference leadership in 2017 is coming dangerously close to replicating the medieval church in its call for the serious discipline of large sectors of the church on the basis of a non biblical issue.

9.1. The recent General Conference documents and procedures do not reflect faithfulness to the Bible’s teachings in Acts 15 or Matthew 18.

9.2. Due to the suppression of data and the manipulation of the events surrounding the voting process, I do not believe that the 2015 vote on women’s ordination indicated the voice of God.

9.4. The current atmosphere of confrontation in Adventism has not been brought about by the unions, but by the General Conference leadership and its non biblical and manipulative tactics.

9.45. The October 2017 meetings may help the worldwide Adventist Church decide whether it wants to move more toward an Adventist Ecclesiology or toward a more Roman Catholic variety.