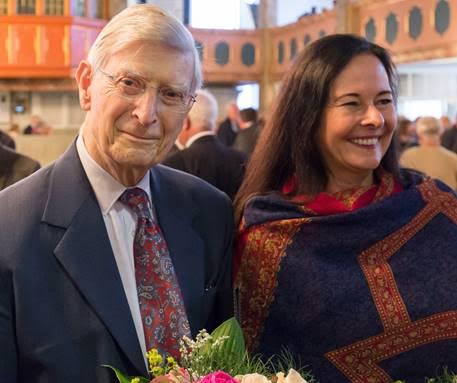 From APD, June 15, 2017:      The 2017 Brahms Prize was awarded to the Swedish conductor Herbert Blomstedt who is an Adventist by faith. The Brahms Society of Schleswig-Holstein in Germany honored the artist for his outstanding services to music and particularly the artistic heritage of Johannes Brahms. The ceremony was at St. Bartholomew’s Church in Wesselburen, Germany, on June 10.

The Brahms Prize has been awarded to an outstanding musician each year since the year 1988, including Leonard Bernstein, Sir Yehudi Menuhin and Anne-Sophie Mutter. Blomstedt is best known for his performances with renowned orchestras of German and Austrian composers such as Brahms, Beethoven, Mendelssohn, Schubert, Bruckner and Strauss.

Blomstedt, who celebrates his 90th birthday on July 11, is scheduled to conduct more than 90 concerts this year with famous orchestras in Europe and Asia. He was born into an Adventist family, the son of an Adventist pastor. He received his first musical training at the Royal Conservatory in Stockholm and Uppsala University. He later studied conducting at the Juilliard School of Music in New York, contemporary music in Darmstadt and renaissance and baroque music at the Schola Cantorum in Basel. He has worked with Igor Markevitch in Salzburg in Austria and Leonard Bernstein at Tanglewood in the United States.

Blomstedt is an elected member of the Royal Swedish Academy of Music and has been awarded several honorary doctorates. In autumn 2003, he was awarded the German Federal Cross of Merit. He remains Honorary Conductor for the Leipzig Gewandhaus Orchestra and he has a similar honorary position at six other orchestras: the San Francisco Symphony Orchestra, the NHK Symphony Orchestra in Japan, the Danish and the Swedish Radio Symphony Orchestra and the Bamberger Symphoniker and the Staatskapelle Dresden, which has also honored him in 2007 with the Golden Badge of Honor.

Blomstedt endowed in 2003 a scholarship at Friedensau Adventist University in memory of his late wife. The Waltraud and Herbert Blomstedt Prize is given to excellent bachelors or masters theses in the fields of theology and Christian social work or artistic achievement in the Institute of Sacred Music.

APD is the Adventist news service in Europe. The featured photo shows Blomstedt with a presenter at the awards ceremony.