You may wonder when you hear that the theme for this year’s General Conference Executive Committee is “Faithfulness in Christian Lifestyle”: Why does a business meeting have a theme? And why this particular theme? Why, in a day and age when we’re trying to promote a more gospel-based understanding of who we are, are we making vegetarianism and related issues the central thrust of a business meeting?

Let me just remind you that though a General Conference (GC) Executive Committee is officially a decision-making meeting, in fact it’s as much about ringing all the right notes of the church culture as it is about deliberation. There are decisions to be made, to be sure, but they tend to be slipped in between reports and prayers and hymns and devotionals and sermons and more reports.

In the morning there was only one section—policy wording changes—that involved voting yes or no, and that was gone through quickly.

But to start at the beginning: Elder Wilson’s text for the day was from 1 Chronicles 28:

“I will establish his kingdom forever if he continues resolute in keeping my commandments and my ordinances, as he is today…observe and search out all the commandments of the Lord your God; that you may possess this good land, and leave it for an inheritance to your children after you forever…for the Lord searches every mind, and understands every plan and thought. If you seek him, he will be found by you; but if you forsake him, he will abandon you forever.”

I find this a very accurate expression of the kind of Seventh-day Adventism I was taught for most of my life: one where blessings come as a result of obedience.

Dr. Neil Nedley, director of Weimar Institute, is one of Elder Ted Wilson’s favorite speakers, and it is a rare GC Executive Committee where he isn’t featured. His sermon opening the session today was probably the finest example of spiritualizing health principles that I’ve ever heard. He asserts, among other things, that unclean meats are responsible for all major plagues such as influenzas, ebola, HIV/AIDS; that the effects on the frontal lobe from one alcoholic drink last a month; that you can’t be a good quarterback if you use caffeine, because it muddles the judgment.

This sermon supports many of the things that Seventh-day Adventists believe, and should be very popular with our members. You can watch it here.

The secretary’s report, quarterbacked by the enthusiastic but presumably caffeine-free G.T. Ng, is always a mixture of humor (G.T. likes funny stories), reports and statistics.

The missions report falls under this department. I’ve long been an admirer of some of the creative efforts of Gary Krause and his team, but I will tell you that organizationally the missions department is a confusing mishmash of at least a dozen individual organizations, each with its own identity and logo and trademark, overlapping to such an extent as to be largely indistinguishable to the onlooking layperson. Perhaps this is the best way to manage this kind of work, but I think it’s more likely that this is like the stuff filling your basement: things keep getting added, but nothing is ever taken away. In any case, they’re doing a lot of really good things, and I only wish everything weren’t divided into so many separate silos.

Dr. David Trim, always a good communicator, did one of his best reports that I’ve heard from him, looking at the relationship between money, congregations, tithe, and administration. He preceded his report by first making sure we know that our membership statistics are “greatly overstated,” even though a few divisions have reduced their size through auditing. I appreciated his honesty. 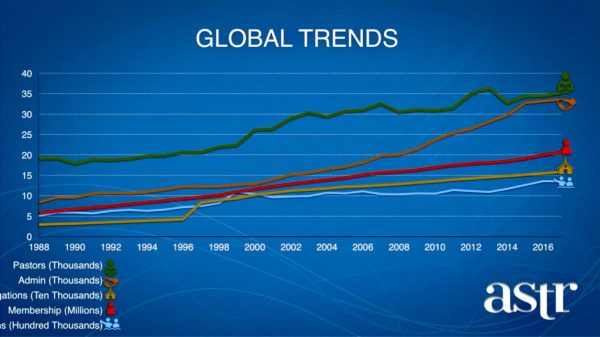 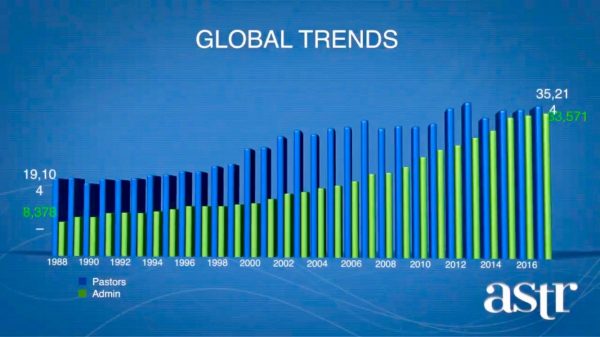 After presenting this slide, Dr. Trim said, “I’m sure all of us feel like more of our resources should go to front line ministries.” Hearing nothing, he said it again in slightly different words. Still nothing. I hope those in the room weren’t paying attention, rather than that they really do think that administration is more important than front-line ministries.

The last item of the morning was a fast trip through some policy items presented by VP Hensley Moorooven with just brief enough explanations that it would have seemed impolite to interrupt to ask, “Wait, what does this really mean?” Things were moved through not so much with dispatch on the chair’s part as with disinterest on the audience’s part, and that seemed just fine with everyone. Most of the changes were editorial, but two are worth mentioning.

One was a recommendation that “institutions at every level should develop and implement guidelines regarding the use of social media and social networking that are in harmony with division working policy and consistent with national, state or provincial laws.” I understand why you’d want to warn, for example, a loose-cannon pastor before he posts on Facebook that he’s going to take a second wife just like the patriarch Isaac had. But the wrong kinds of policies could end up being quite restrictive—a way to control free thinking and suppress creativity.

Some were troubled by the notion that we have to abide by “national, state or provincial laws.” One person pointed out that, in fact, some of our traditional beliefs would be regarded, in some countries, as hate speech. Think about how some of us speak about Roman Catholics or gay people!

A number of obsolete references to the North American Division (NAD) were removed, such as that the secretary and treasurer were officers of the General Conference, which is no longer true. But there’s a lot more to that change than just editorial cleanup. For many decades, the NAD wasn’t a stand-alone division, but considered part of the General Conference—even occupying the same building. The changes made today mark the final severance of that special relationship. The NAD now stands on its own as a separate division, like all the other divisions, no longer intertwined with the GC. Remember that as you read on.

After lunch, Elder Moorooven took up some constitution and by-laws items. These items will be brought to the Indianapolis session next summer, during one of those times when most of the delegates are out shopping. And most of these, to be fair, are clean-up items that deserve fairly little attention. But it is the nature of this kind of meeting that things of consequence are mixed into the same stew with the mundane. Thus what follows.

Struck out was this paragraph:

Local Conference/mission/field presidents shall be invited to attend Annual Council meetings of the General Conference Executive Committee when it is held within the territory of their division. Unless an executive session, which consists of members only is called, such invitees shall be extended the privilege of participation in all discussions of the meeting, but without vote.

Union conference presidents are all members of the GC Executive Committee. But as long as I’ve attended these meetings, some of the NAD local conference presidents have been invited to attend, too. They can’t vote, but they made their presence known in the past few years in discussions of women’s ordination and compliance.

Elder Wilson explained that it was written as it was because originally the plan was to hold GC Executive Committee meetings all over the world. But that turned out to be too expensive, so it’s been a long time since that has been done. As Elder Wilson explained, it’s only benefited the conference presidents of one division, because all annual councils are held in Silver Spring. And the GC doesn’t anticipate holding Annual Council anywhere else because it costs at least $700,000 to $1,000,000 more!

Furthermore, he said, the GC does not rely on direct conference participation in matters of GC governance.  According to the constitution, “Unions are the foundational blocks of the GC,” he said.

NAD conference presidents were understandably disappointed in this. Some pointed out (though I don’t know if this was especially helpful) how much the NAD has done for the world church, and how it’s been underappreciated by the world church.

Now, to be honest, many of my NAD conference president friends don’t come to GC Executive Committee unless something major is on the agenda. But they liked to know they could. And many did during the big discussions on ordination and compliance in the past few years.

They still could attend: they just will have to be observers, and can no longer rise to their feet before a microphone and express their opinion. But without an invitation, they don’t have a reason to ask their conferences to pay for that travel, and most will probably stay home and hope that their boss from the union office speaks for them. It will change the dynamics in the room, because now those representing the western church, already outnumbered in vote, will be decisively outnumbered in voice, too.

Here, I return to my observation above that the stated goal was eliminating from the policy, by-laws and constitution items having to do with the special, intertwined relationship between GC and NAD. This was one of those items. The NAD wanted to be freed from those that encumbered them, but not from those that cost some measure of voice and control. The GC Treasurer, Juan Rafael Prestol-Puesán, rather bluntly said as much: if the GC and the NAD are not a single intertwined entity, then you can’t expect to be given special privileges. There seemed to me a measure of “so there!” in it.

In the end, the vote was tabled—not, I think, because there’s any doubt of the outcome, but because we were running out of time and some people didn’t have their official voting cards.

What we’re seeing is the tension in the room (and the church) between the western church, which feels somewhat entitled, it seems to me, and the rest of the world, which resents that attitude. The NAD is no longer the privileged part of the world church, no matter how much money we have supplied to it. (Which, by the way, is also changing—more tomorrow.) And you know what that means, too, for the longer-term shift of power in the world church.

If you’re looking for a way to follow Annual Council 2019 in real time, AT reporters are live tweeting here:
https://mobile.twitter.com/AdventistToday
If you don’t have a Twitter account, you can still follow our live tweets on atoday.org here:
https://atoday.org/adventist-today-twitter-feed/
The live video link is here:
https://live.adventist.org/en/events/event/go/2019-10-11/2019-annual-council/
Follow the agenda here:
https://executivecommittee.adventist.org/wp-content/uploads/2019/10/19AC-Agenda-Electronic.pdf

Tomorrow: more about the restructuring of the divisions, and how the General Conference will be funded.