“Written for Us but Not to Us”: Genesis 1 in Its Historical Context

Just as Jesus told apparently simple parables to convey deep spiritual truths, so Genesis 1 (i.e., 1:1–2:4a) uses an easily remembered account to help us reflect on matters of first importance. In this way, it is also like ancient Near Eastern creation stories. For Israel and its neighbors, creation was not a self-contained topic, but an opportunity for exploring the crucial questions of human existence, such as ‘Who am I?’, ‘Why am I here?’, ‘Where am I going?’ The Adventist Today Sabbath Seminar will explore how Genesis 1 relates to and engages with the mythological beliefs of its time. Understanding these connections deepens our appreciation of the biblical account. Failing to understand the historical and religious context in which Genesis arose reduces our ability to appreciate its relevance for us in the 21st century. What follows is preliminary information to set the scene for the discussion in the upcoming seminar.

Hebrew authors delighted in writing accounts that had a definite design, often using repeated patterns, which they used to underline the significance of what they were writing. Genesis 1 is a good example of this. Our appreciation of individual verses is greatly increased if we look at the structure of the whole account. Investigating this structure will also suggest that we should do more than merely read the surface of the story. We have here a narrative working at more than one level. First, note that the account has an introduction (vv. 1–2). The first verse summarizes the account that follows, which is concerned with recounting how, ‘In the beginning, God created the heavens and the earth’ (v. 1). What follows simply fills in the details of this summary. The introduction then continues by describing the state of affairs when God started his work—the earth ‘was formless and empty’ (v. 2). This phrase translates two Hebrew words, tohu wabohu. Their exact meaning is debated, but generally they convey the idea of disorder or chaos. That is to say, the world was not yet ordered because God had not yet completed his creative purposes; matter had not yet been shaped, separated, and assigned to fulfil God’s will.

The second item to note is how the rest of the account describes what God did over the next few days of creation. If we ask the simple question, ‘Which new items does God create on each day?’, then we get the following simple answers. God first creates light, forming a distinction between light and darkness, which God calls ‘day’ and ‘night’ (vv. 3–5). On the second day, God creates the firmament, which acts as a separation between the waters (vv. 6–8). We can think of the expanse as being equivalent to our ‘sky’. On the third day, the dry land emerges from the waters and vegetation starts to grow upon it (vv. 9–13). Day four sees the creation of the heavenly bodies—the sun to rule the day and the moon to rule the night, along with the stars (vv. 14–19). On the fifth day God creates animals to inhabit the waters and the air—largely the fish and birds, but not confined to these creatures (vv. 20–23). Land creatures and human beings are created on the sixth day (vv. 24–31). Finally comes the seventh day, on which God adds nothing to his physical creation, but simply rests, blesses and sanctifies (that is, makes holy), the seventh day itself (2:1–3). God’s rest on this day is conveyed by the Hebrew verb shabat, from which we get our English word Sabbath. The final line echoes the summary with which the account started, ‘This is the account of the heavens and the earth when they were created’ (Gen 2:4a, compare Gen 1:1).

When we set out the simple summary outlined above into a diagram, our eyes are opened to several matters.\ 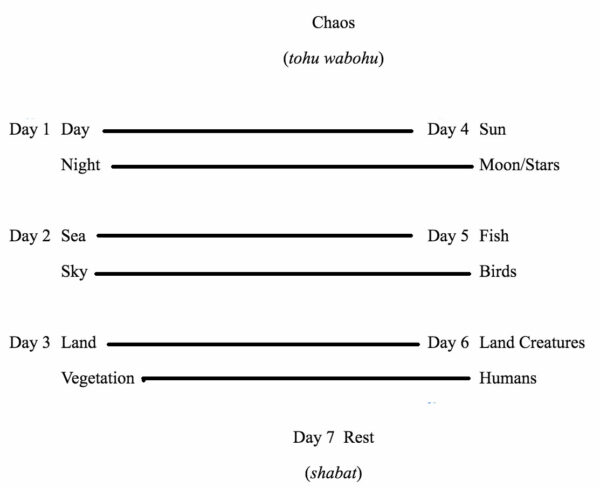 The creation account has a symmetrical balance between the two columns. So, reading the diagram horizontally, we see that day and night created on day 1 are balanced by day 4 where the sun rules the day, and the moon rules the night (1:16). The sea/waters and sky of day 2 are matched by the fish that live in the waters and the birds that fly in the sky on day 5. Similarly, the land and vegetation created on day 3 are complemented by the land creatures and humans of day 6, both of whom live on the land and are sustained by vegetation (1:29–30). Just as important as these horizontal pairs, however, is the overarching vertical correspondence, between the tohu wabohu chaos with which creation starts, and God’s shabat, or rest, with which it concludes.

This simple structure underlines some basic affirmations. First, it warns against the common conclusion that human beings are the climax of the account. Although significant, they are not the climax. Rather, the highlight, and the point to which all creation moves, is the blessing and sanctification of the seventh day, the day of rest. Now why this should be the climax is not explained at this point. It is an issue that Scripture will return to later. But at the very least Genesis wants to tell us that creation cannot be limited to physical objects that can be touched, weighed, or photographed. God’s blessing, sanctification, and rest on the climactic seventh day shows that creation is ultimately a spiritual matter.

Secondly, the balance in the structure of the account underlines that God is a God of order. In the same sequence as he creates the ‘environments’ of days 1–3, so he creates the creatures to live in or rule those ‘environments’ in days 4–6. Since this is one of the facts about God revealed on the first page of Genesis, we can anticipate that the rest of the book, indeed the rest of Scripture, will have something to say about God’s desire for order.

Thirdly, and perhaps most important of all, the creation account shows God bringing order out of chaos. Here we see physical chaos and order, but as Genesis progresses it becomes clear that God also has his eye on moral/spiritual chaos and order.

These are some of the initial highlights of Gen 1. But what were Israel’s neighbors in Mesopotamia and Egypt saying about creation? And how does understanding their similarities to and differences from Gen 1 enhance our understanding of what Gen 1 is all about? That is the subject of this week’s seminar.

Laurence Turner is Principal Lecturer Emeritus in Old Testament at Newbold College of Higher Education, Bracknell, England. He is the author of Announcements of Plot in Genesis (Sheffield: JSOT Press, 1990); Back to the Present: Encountering Genesis in the 21st Century (Grantham: Autumn Press, 2004); Genesis in Readings: A New Biblical Commentary. 2nd edition. (Sheffield: Sheffield Academic Press, 2009).

Gina Jett is an attorney who is retired near Sacramento, California.

Listen to the presentation by clicking here.

The Theology of Difference News Briefs for February 3, 2022