Why the Church Needs a Membership Adjustment Before 2020 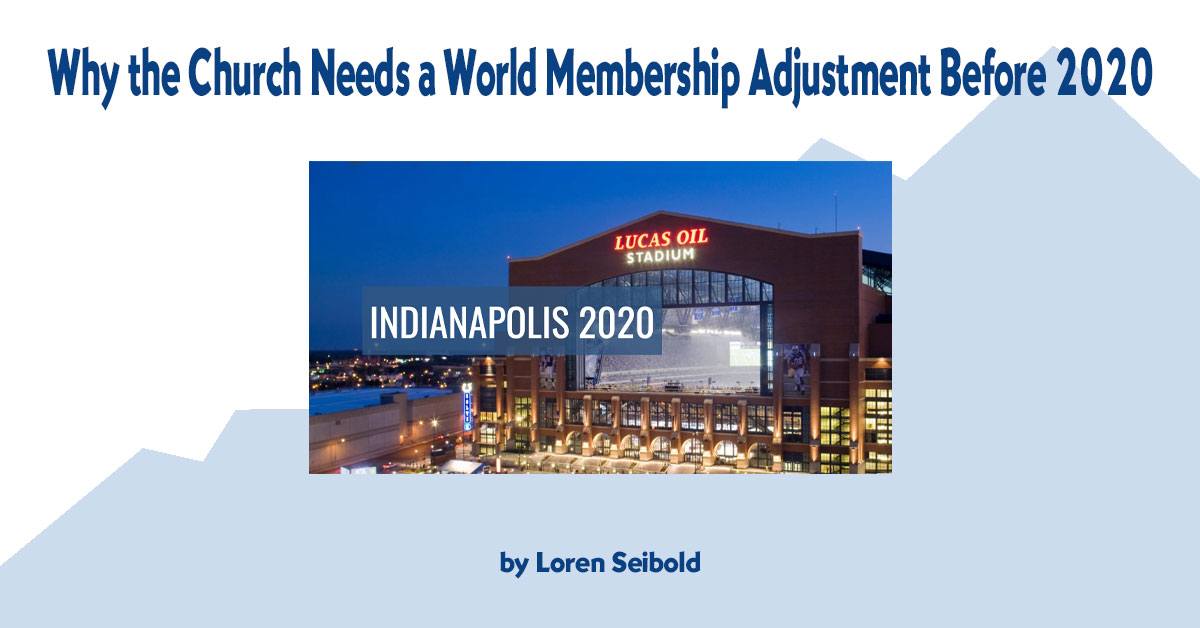 Every time I attend a meeting where General Conference (GC) leaders speak, I am told that Ellen White said that the General Conference in session is God’s highest authority on earth. You would be astonished at the number of times in a GC executive committee meeting listeners are reminded of this.

There are problems with this statement. First, although she did say this, later Ellen White says exactly the opposite about the General Conference.[1] Second, it is clearly a statement of hierarchy, the very kind of centralized, overweening authority that Ellen White condemns when Roman Catholics do it. Third, it seems to be used by GC leaders to justify their own authority between sessions, which accounts for initiatives like the compliance committees.

However, there is another thing that seems very important to the GC’s authority that we haven’t talked much about: the founders of the church, perhaps inspired by American democratic systems, set up this authoritative body to be based on representation of membership. If I understand the principle correctly, the authority of the GC in session depends on fair and honest accounting of our world membership.

Do you ever look at all the names in your church directory and wonder who some of those people are? It’s pretty common for church memberships not to match participation.

But your congregation’s membership-participation differential is excellent compared to the eastern part of Uttar Pradesh, India. This conference (called “section” in India) has 32 churches. Yet this small region claims an astonishing 41,312 members, which would mean that they have an average membership of 1,291 in each church. Says Pastor Gladwin Charan, who is himself from Uttar Pradesh, “There is no SDA church in Eastern U.P. section where 100 people can sit and worship.… There is no village in entire Eastern U.P. section where you will find 20 SDA members.”

But they’re beat out by the Western Uttar Pradesh section, which claims 20,230 members in just seven churches![2]

After we wrote about this in an Adventist Today news report, we heard from many who told us that this is true not only in the Southern Asia Division (SUD), but in other parts of Asia, as well as in Africa and Latin America.

How did this happen? Programs such as Share Him and Maranatha were in full swing in the early 2000s when most of these numbers were added to the statistics. Did the mission tourists sweep in, hold meetings, build churches, baptize thousands, and then when they went home, so did the new members? Probably that’s part of it.

But the numbers in some areas are astonishingly out of whack, making one suspect that some of them were simply penciled in. Although the SUD adjusted its membership downward by about half a million in May, the memberships per congregation in many areas still seem extraordinary, and the statistics in Uttar Pradesh that I cited above changed little in the adjustment.

Let‘s suppose there are an average of 100 people among these 32 congregations in Uttar Pradesh each Sabbath, which is possible, based on Pastor Gladwin Charan’s letters. That’s 3,200 attendees conference-wide, which is different from the claimed membership by a factor of almost 20. If we apply the same metric to western Uttar Pradesh (whose average membership is nearly 3,000 per congregation) it’s off by a factor approaching 30.

Yes, I know that every congregation has an inaccurate membership roster. Many here in the North American Division (NAD) are off by a factor of three, four, or even five. But claiming 20-30 times more members than you actually have? For that, you have to go to India.

Inasmuch as this isn’t the only area in the world where foreign money has built churches and done evangelism, would it surprise you to see similar inaccuracies in other parts of the world field?

Why Does It Matter?

Basic honesty should be enough to motivate leaders to make needed corrections.

But there’s another thing that’s important, too: the decisions we will make as a church when we meet for the General Conference session. As long as Elder Wilson’s position (which I don’t accept, but that’s a separate story) is that the GC is a top-down organization where a vote by one body dictates what every Adventist throughout the world has to do and believe, what the GC session votes will matter to us.

Take, for example, the 2015 vote against women’s ordination, which lost by roughly 60% to 40%. It is common knowledge that more votes for women’s ordination came from the NAD, Europe and Australia/New Zealand. More votes against it came from the rest of the world. Suppose that a place like the Southern Asia Division was held to a standard where membership is no more than 4 or 5 times actual participation, rather than 20-30 times. Extend the same standard across the entire world. If this had this been done before 2015, might it have changed the outcome of the vote against women’s ordination?

Please understand that I have no objection to the world church having more representatives than the western church—if it’s true. But if representation is based on inaccurate—possibly even dishonest—reporting, it calls into question the whole notion of a representative General Conference session, and therefore the authority of its votes.

It is unlikely that women’s ordination will come up again in a General Conference Session for a decade or two. But in 2020 other important decisions will be made, such as who will be the next GC president, and whether he will, like the current president, lead us decisively into the past, or progress us into a more meaningful, missional future.

Most believers in democracy are quick to condemn dishonest voting in the political world. Shouldn’t it matter in church votes, too?

We have a whole department in the GC whose job is to calculate church statistics—and indeed Dr. David Trim, who is in charge of world church statistics, is a conscientious church leader who has encouraged membership audits. But he can do no more than ask divisions to cooperate. The official statistical tables display rather obvious problems. Looking at the “deaths” column, for example, in many places in India hardly any Seventh-day Adventists die. And churches in little villages with memberships in the thousands don’t seem very realistic, either.

I suspect, however, that system-wide there’s not a lot that motivates any entity to do this kind of examination of membership.

First, if a membership audit knocks a million or two off the number of Seventh-day Adventists in the world church, that doesn’t match our public triumphalism. Honesty, in this case, would look like defeat.

Second it could, in a representative system, shift the balance of power. No one is going to volunteer to give up power, so foot dragging dooms the effort.

Between now and the 2020 gathering in Indianapolis, you will hear often from 12501 Old Columbia Pike that the General Conference in session is the highest authority of God on earth. What we need to ask our leaders: is that still true if we don’t have representation based on good numbers?