Why Our Children Aren’t Attending an Adventist School Anymore 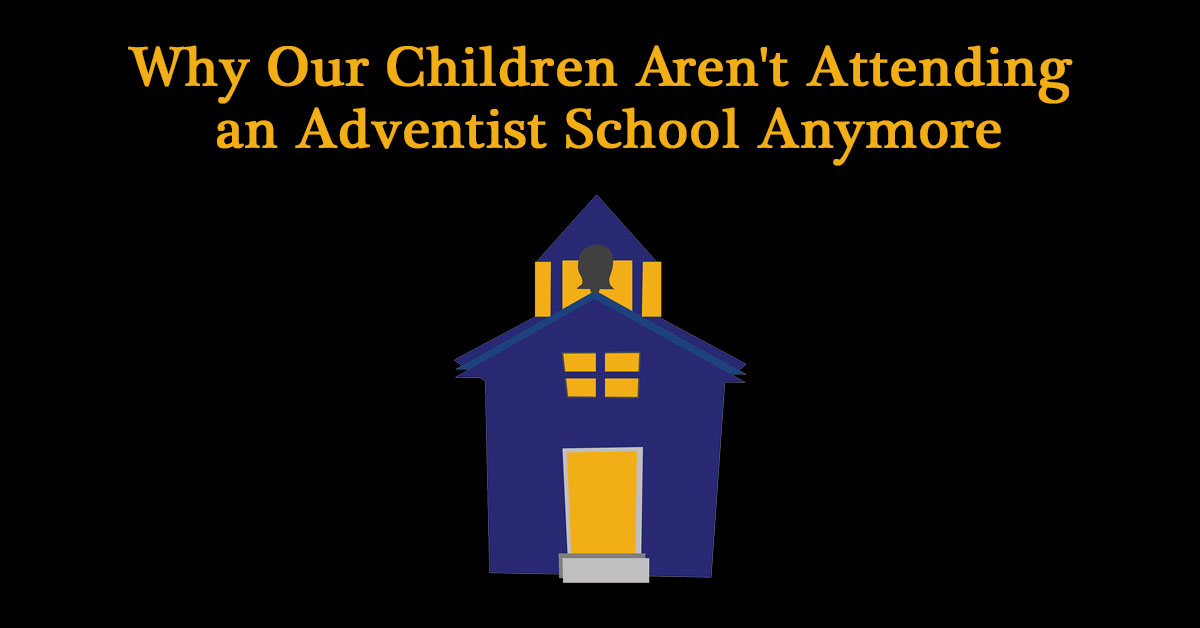 Much has been written about why some parents choose not to send their children to Adventist schools. Is it because they can’t afford tuition? Aren’t dedicated to the church’s teachings? Are ignorant about what the schools offer?

In reality, there’s a lot more nuance to that question. I attended Adventist schools from kindergarten through college, and remain dedicated to the church and its teachings. But much to the consternation of our own parents, my spouse and I have chosen to send our children to another local Christian school.

Our reasons may be school-specific, but I suspect the problem is more systemic. This isn’t intended to point out the errors of Adventist education or to make a call for an impossible reform. Rather, I wanted to take this opportunity to lay the cards out on the table as to the rationale for our decision, and perhaps engage others in this conversation.

The local Adventist school has a few hundred students from kindergarten through twelfth grade. This local school is on life support. When you walk across the campus and see facilities that look to be in serious distress, tiles missing in the bathrooms, and a marquee sign that’s been missing letters for years, it doesn’t inspire confidence.

Then there’s the nearly constant turnover of administration and staff. Younger teachers stay a year or two before moving on to “better” Adventist schools. The school seems to have a new principal every year. I’ve watched this for the last five years, and it hasn’t gotten better. There is deferred maintenance that would not cost anything, but it seems that the school has gradually accepted that this is how things are, and how they will remain. The school is in constant dire need and the administration and staff openly jostle over limited resources.

Several of the teachers seem to believe that being assigned to this outpost is the Adventist equivalent of being sent to Siberia. Parents have been asked to intervene on behalf of teachers to administration and the conference to help get needed resources. Parents are happy to help with a school, but they want to work with programs that are bound for success. Schools, through their appearance, administration and teachers need to model positivity and a “can-do” attitude. As much as we want to support Adventist education, we don’t want to feel that we need to “rescue” a school.

I fully support Adventist theology and teachings, and I think our schools should as well. And that includes the reality that certain things should be left to the individual conscience. In our local school, the grandparents of a little girl who was not an Adventist wanted to attend the kindergarten program. Her grandparents even paid to refurbish the kindergarten room, but because the girl wore earrings, the school pressured her to remove them. A seemingly small issue, but it escalated to the point where her mother pulled her out of the school because the school made such a big deal out of it and it made the school seem very strange.

The Adventist Church has long taught that “the church does not act as a conscience” for its members in things, up to and including whether to have an abortion, but when it comes to things like drinking coffee or wearing jewelry, it demands 100% compliance or you’re out. You’ll notice I said “the church,” and that’s because for kids, the school is the most direct representative of what “the church” teaches. You may find that teachers say, “I don’t agree with this rule, but this is what the church teaches.”

The reality is, in the churches in the local area, jewelry is essentially a non-issue, so the school’s position is not consistent with what the kids would hear in church.

Most of these have to do with the way something or somebody looks, with things like jewelry taking on an overstated importance because it is one of the most visible areas of friction. Do we want to send our kids to a school where issues that are simply not important from an eternal perspective are viewed as the line of differentiation between being a “good” or “bad” Christian?

This kind of selective enforcement 180 days a year succeeds in one thing: making kids legalists, regardless of where they may fall on an issue. They can hear all day about how much God loves them, but these are the things that become the symbols of their faith, and the fruits of the Spirit take on a secondary importance.

Failure to Reach the Community

Adventist schools seem to think that they can survive solely by drawing in students from local churches, and that if a parent can afford private education, they will send their children to the local school. But the reality is, Adventist schools are competing with many other schools, including faith-based schools.

Before we made our decision, we made it a point to visit seven or eight other Christian schools in our immediate area. Several of them had programs specifically for prospective parents, and we were invited to open-houses. One school even had an hour-long program for prospective parents and students, including a song by the choir, tours of the classrooms, and refreshments with the teachers and staff where we could ask them anything. In one school, parents were present who could tell us the benefits of their schools. They really made an effort to try to get us to enroll our kids. But when we asked the Adventist school about whether they had any marketing events, they had nothing, and the idea of marketing seemed like a foreign concept to them. While other schools that charged the same tuition had waiting lists, the Adventist school feels empty.

I would like to find out from the Adventist education people why they don’t seem to take marketing seriously, why they appear to be accepting a slide into irrelevance. I suspect that they’d just say that it’s because Adventist parents don’t support them.

We’ve sent our kids to a non-denominational Christian school nearby that’s doing an excellent job. The kids come home singing Bible songs and the teachers focus on helping them build a growing relationship with God. The tuition is about the same, and if it has drama in the background, as most human ventures do, we aren’t aware of it.

This is just one perspective, and it may be completely different from yours.

Terry Brava is a pseudonym. The author hopes to open a conversation on behalf of other parents who are concerned about Adventist education.