Why I Marched Instead of Going to Church

I’m skipping church today (not attending the morning services at our church)—and I’m a pastor.

I’m not sick or going on vacation; there wasn’t a scheduling conflict, and I’m not skipping just because I just needed some time off.

Although, as is true for most of us, some time off would be nice…

I’m skipping church and going out to march. Today I’m marching at the Fourth Annual Women’s March of 2020. I’m not marching because of politics, at least probably not the kind of politics that you might think of at first. Also, I’m not skipping church to march because I agree one hundred percent with all the other people who will be marching with me.

So why, then? Why skip church when it is, in addition to many other things, my actual job?

Growing up in church, I didn’t see people like me preach. Ever. Now I do realize that a big part of this is because I am a pastor’s kid, and my dad did virtually all the preaching at every service I attended until I left home for boarding academy. Sometimes, when our extended family would get together, my mom’s father would preach, as he was also a pastor. But this didn’t help me much in my search to personally identify with the messages being shared from the platform at church.

While in college, after eventually deciding to major in religion, I learned that more than one guy I dated assumed that my pursuit of a career in pastoral ministry was a phase that I would grow out of: as if it were a new favorite food or song I had just discovered. All in all, I ended up attending three different Adventist colleges/universities while I continued to pursue a bachelor’s degree in religion. As I attended each school, I learned that though they each had their own strengths, they all seemed to share the very same weaknesses; it was not unusual for me to be one of two or three women in my religion classes — particularly as I began taking more upper division classes. I remember one particular class where, after being sick and missing class one day, the only other girl in the class reached out to me and asked me to let her know if I was going to miss class again so that she could skip that day as well. Apparently, being the only woman in the room full of men was just too much. Later, when the same thing happened to me when she had to miss class one day, I understood more of what she had experienced. Nothing dreadful happened, but the atmosphere, content, vocabulary, and class discussion that day was enough to make me not wish to repeat the experience.

Several years later I started working towards a Masters in Divinity degree while attending my fourth Adventist college/university. There I heard a woman preach consecutively and regularly for the first time in my life: I was 26 years old. One quarter I took a class titled “Gender Issues and the Church.” The class was taught by a man — and I was the only woman in the class.

Now I work in a conference that employs 93 pastors, only six of whom are women (this is the most women pastors ever employed in this conference, to my knowledge). This month, one of these six women became fully funded by the conference: she is the first of our group to be so.

Please don’t misunderstand me—this isn’t a rant or a pity party. I have been incredibly blessed by my family and educational experiences. I dearly love the people and church where I currently serve as their pastor with collegiate and young professionals. I am also incredibly proud that my conference is taking intentional steps towards more diverse hiring practices.

And I’m sad. Sad that the only professional space where my existence as being both a woman and a pastor is completely unremarkable is at our local, county-wide, interfaith ministerial association (i.e., outside of the Seventh-day Adventist world). Sad that someone mentioned “kitchen stuff” and “fashion” as examples of my professional skills and expertise. Sad that, should I ever marry, many people will assume that my husband is less masculine because of my leadership position. Sad that the only person who has initiated a conversation with me about the difficulties of working in such a male-dominated environment is a church member, who is herself a retired physician. She graduated from medical school in the 1960’s. Sad that I’ve only recently found professional support and collegiality from other women within the church in a secret Facebook group because of how few of us there are and how far apart we live from each other.

Jesus’ obvious love for the outcasts and downtrodden, underrepresented and undervalued, is one of my favorite things about the personality and character of who God is. Through time, study, and life experience, I have learned that God has called me, as he has called us all, to live my life by loving people; not merely loving the systems in place that help sometimes, but can also, at times, get in the way of loving others. I will hold forever in my heart a passion to love those labeled as “the least of these,” for of these I am one. One of many. And so I march.

Maybe I’m not skipping church after all. 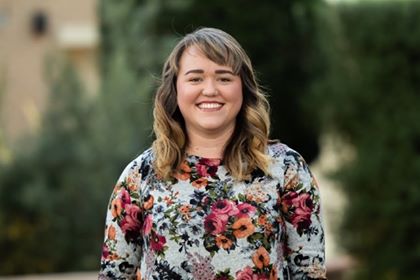 Danita Rasmussen is currently serving as the Pastor of Ministry with Collegiates and Young Professionals in San Luis Obispo, California. She is passionate about social justice and empowering others to follow Jesus’ example and live their lives in love. In her free time, Danita loves to take walks with her dog, Piper, and snuggle with her cat, Eleanor. She also enjoys listening to audiobooks, reading, crocheting, and absolutely anything that has to do with horses.