When the Adventist Church Sponsored an Ex-gay Ministry 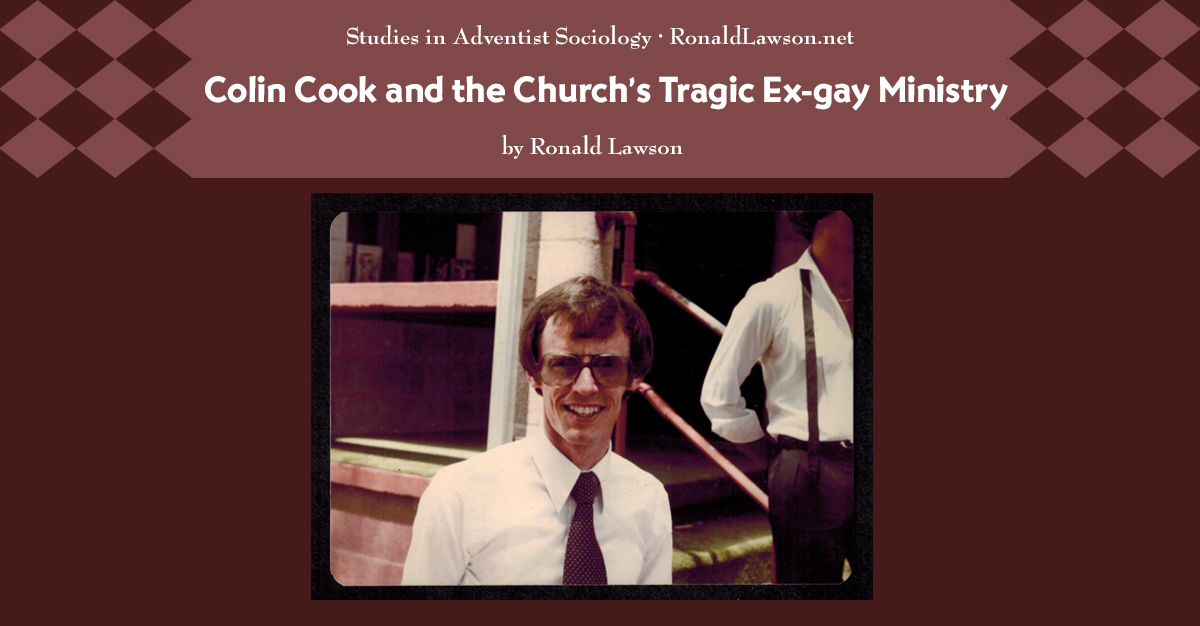 “The Troubled Career of an ‘Ex-Gay’ Healer: Colin Cook, Seventh-day Adventists, and the Christian Right.”

Seventh-day Adventists had long assumed that they had no gay or lesbian members, even though there was a history of gay pastors, some in key posts, being discovered and fired, and gay members being expelled. Nevertheless, when the Gay Liberation Movement began in New York in 1969 and spread rapidly around the U.S. and then much of the world, Adventist evangelists proclaimed that this was yet another sign that the Second Coming was surely about to occur.

However, in 1976, when Colin Cook, one of those defrocked pastors, authored a series of three articles in the Adventist youth magazine Insight proclaiming that it was possible for homosexuals to change, hundreds of letters were received seeking help. Church leaders were shocked to be presented with evidence of the existence of so many gay and lesbian Adventists. This flood of questions also demonstrated that society and church together had persuaded youth who had discovered that their sexual attractions were towards members of the same sex that they were unwelcome, sinful, and surely on the path to damnation. It was not surprising, then, that when Seventh-day Adventist academy and college students killed themselves, it was often rumored—sometimes correctly—that these often belonged to this category.

Cook pronounced himself cured. He married, proposed to launch a ministry to cure other gays, and appeared before the constituency meeting of the Columbia Union Conference hand-in-hand with his wife, the Union chose to fund, in partnership with the North American Division, Cook’s Reading, Pennsylvania-based ministry. This decision made the Seventh-day Adventist Church the first denomination to support such a ministry. Ministry, the magazine for ministers that was also sent free to many clergy from other denominations, publicized the program, so that those who attended it included many Adventists, but also youth from other denominations. This broad interest in the program grew from the fact that while many clergy preached against the evil of homosexuality, they had no solution to offer; Adventism, through Cook, now had a program that the director said provided the needed answer, and he used his own life story, his marriage, and the birth of two sons as evidence. Adventist leaders were proud to be sponsoring a program that was attracting so much attention. They never had professionals check out the program, but extended the funding each year when Cook and his wife appeared as a loving couple at the Union constituency meeting.

When Cook presented a weekend program at a church in New York City in the early 1980s I attended it in order to find out what he was saying and offering. I was shaken to discover that what he said made no sense to me in terms of my own long years of struggle not to be gay: 15 years of guilt and unanswered prayer.

In 1983 I discovered only a few days before SDA Kinship’s Kampmeeting was to begin that our location was very close to Cook’s program. After consulting with other Kinship leaders, I contacted Cook and asked if we could come and hear from him and some counselees about the program. We heard a long philosophical account from Cook and then several detailed testimonies that were again extremely difficult for us to believe in terms of our own experiences.

At the end of the evening, which was the first night of Kampmeeting, the man who had been first to testify and who had given the strongest testimony, approached me. He explained that being from Canada he could not work in the U.S., and was available to attend the Kampmeeting if he could come without paying the cost. We agreed. When, during the week, he had a very public gay romance, I eventually asked him privately how this fitted in with his testimony. He explained that the testimonies were not based on what they had experienced, but on what they had been taught in the program to expect by faith. He then added that the night before the testimony he had been at a bar in Philadelphia, met someone and had had a one-night-stand!

I realized that as part of my study of Adventism I needed to ascertain what proportion of the counselees were in fact cured of their same-sex attraction. In 1986 I finally began that study. I discovered that Cook counseled the men, and his wife counseled the few lesbians who came. Since most counselees were male, I asked some of the lesbians there who of the men had the reputation for having changed most clearly, and set out to interview them. My interviews with 14 counselees, 13 of whom were young and some very young, turned out to be the most painful of my whole study of global Adventism, for all 13 young ones told of sexual abuse by the counselor. None had been cured, but a bunch of them had, as a result of getting to know other gay men well for the first time, fallen in love and accepted their homosexuality.

This presented me with a huge problem. Here was I engaged in a major study of Adventism, yet I felt obliged to inform church leaders of the abuse being carried out in a program they were funding—information that I realized would not bring them joy, and which they were likely to try to keep under wraps. I was afraid I would experience a case of “blame the messenger.”

The details of how I accomplished this, the impact on the program and of how Ministry magazine set out to rehabilitate Cook may be read in my article. You can also read there about a second Cook-run ex-gay ministry, this time in Denver and funded by Focus on the Family, a well known organization within the Christian Right, about how again there was abuse and a scandal. When Adventist counselees in that program who had suffered abuse heard about my role earlier at Reading, they reported their experiences to me and I tried once more to stop this new opportunity for abuse.

This occurred because the Adventist media had not reported the Reading fiasco to the church membership, so that when Cook appeared in Denver a local church invited him to speak and he became a Sabbath School teacher there. He was also asked to speak on overcoming homosexuality in various Adventist locations, such as to the student body at PUC. Consequently, because of all the earlier positive publicity concerning his Reading program, gay Adventists continued often to be told that Cook could cure their “problem.”

My paper is called “The Troubled Career of an ‘Ex-Gay’ Healer: Colin Cook, Seventh-day Adventists, and the Christian Right.” My web-site is www.RonaldLawson.net