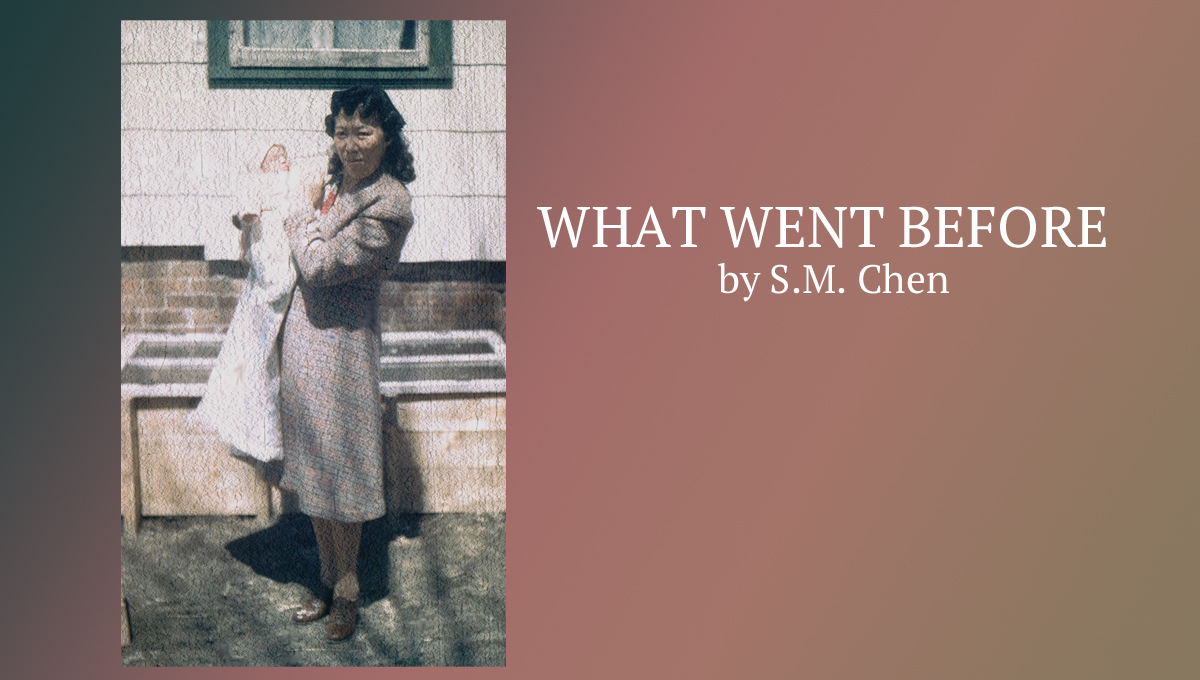 “The heart of a mother is a deep abyss at the bottom of which you will always find forgiveness.” –Honoré de Balzac, novelist, playwright (1799-1850)

What you gave me:

birth certificate (am I really this old?)

handprints (were they once that small?)

baby photo (didn’t have much hair)

first word, after falling down (unrepeatable)

transition from crib to bed

graduation from pacifier and bottle

With three older brothers, most items, till age six, were understandably hand-me-downs, but then you took me by bus to a small (but not as small as ours) town two miles away (it seemed a long way) where I got my first new clothes, including a bright pink sweatshirt. In a shoe store I put my feet in an x-ray machine and wriggled my toes; who knew that, like termites gnawing in the quiet night, damage might be done?

In the early years, you took some of the finery you had brought with you when you emigrated, and used the fabric to make clothes for some of the older children. The thought of your doing that is rending (more the heart than clothing, though that, too).

You prepared a wide variety of dishes, without recipe, instructions summoned from the mind’s recesses. Your pizza and apple pie, in particular, were non-pareil, the latter made of various apples we often picked ourselves from orchards in our locale. Your ability to provide tasty, nourishing sustenance for a large family was, particularly with the benefit of clarity of hindsight, nothing short of astonishing.

When I’d come in from sledding or ice-skating out of the cold of winter, you’d warm my feet in a basin of hot water, my hands in the soft warmth of your underarms, my belly with a cup of hot Postum, and my soul with gentle words of comfort.

It would have been all too easy to be partial to the better-behaved, more compliant of your six children, but your lack of perceived favoritism was remarkable. I believe all of us were made to feel special (‘of course I love you the most’) at one time or other. Perhaps because you came from a large sibship (twelve) yourself, you sensed how inimical it would be, to both favored child and non-, for a parent to exhibit partiality.

You endured us with the patience of a female Job. Being both a parent and grandparent myself, I marvel at the equanimity you possessed.

During our formative years, you were a stay-at-home mother. That benefited us immeasurably. Knowing that, when we came home, you would be there was a source of reassurance, a lighthouse by the often-turbulent seas of childhood. I didn’t need a security blanket (nor did I suck my thumb).

More than anyone, you exemplified this text in Holy Writ: ‘Pray without ceasing.’ Your life seemed one of constant communion with the Almighty, of selflessness, of otherness.

I once read something by a church founder which opined that, at the time of writing, not one in twenty (believers, I assume) would be ready for the Second Advent. Were a forward extrapolation reasonable, and did that condition yet hold true in our day, I recall thinking that if you were a member of such a group, the other nineteen would be well advised to look within with diligence.

You could have easily complained. Life was not easy. Father never made a lot of money, and you didn’t work until we children had largely flown the nest. There were many mouths to feed. The wolf was never far from the door. But you maintained a cheerful spirit of humility and gratitude.

Ernest Hemingway once defined courage as grace under pressure. I admit to not thinking of you as particularly courageous. But that was my failing; my vision and perception were limited. Upon further reflection, and with the benefit of retrospect, I realize you were subject to as much pressure as any, and likely more than most. Yet you exhibited the kind of grace that comes from a place that we now only see as through a glass, darkly.

Despite being physically short, in the pantheon of mothers, you would stand tall.

I admit to a certain bias. However, that bias was vindicated by others when you were selected Mother of the Year for Massachusetts in 1964. We, your offspring, deemed the accolade appropriate and well deserved. In typical fashion, you ascribed any commendation to the beneficence of the Almighty, whose blessings were indeed abundant and without number.

I wish to keep your memory alive.

It is the least I can do.