What is Happening to Christmas? 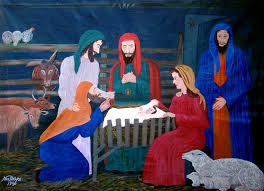 By Monte Sahlin, December 24, 2017: Christmas is celebrated around the world in many different ways, and in nations where there has historically been a strong Christian presence it has become a part of the larger culture. For example, in the United States nine out of ten people in a recent poll by the Pew Research Center said that they celebrate Christmas in some manner.

In recent years some conservative Christians have attempted to reverse this trend by fighting back against the practice in many large businesses to use “Happy Holidays” or “Season’s Greetings” instead of “Merry Christmas.” For some this gets mixed with a political opinion against cultural minorities and immigrants.

The Pew survey found that the majority of Americans say “it doesn’t matter,” with only a third insisting on “Merry Christmas” and half that number preferring the more neutral greetings. In a 2012 survey, only 46 percent agreed that it does not matter, people should use the form that they wish.

In Europe and many other places in the “western” world, there is even a more secular context today and Christmas is for most people a cultural event, not a religious observance. Only in some nations with a strong Catholic history does Christmas remain largely a time to go to church and focus on the birth of Christ.

For Adventists these issues are further complicated by the long history of a small number who insist that Christmas is a pagan holiday and should not be recognized by true believers. They point out that Bible scholars do not think December 25 is the actual birthday of Jesus and often dredge up an Old Testament reference to some non-Israelite ritual that included a tree and mix in a lot of anti-Catholic sentiments along with a generally legalistic perspective. They ignore the fact that Ellen White actually addressed the question of Christmas and recommended that we focus on the idea of Christ coming as God incarnate and the spirit of sharing which is widespread at this time of year.

What is good about Christmas is that it does awaken at least a small measure of generosity and compassion in people who spend much of their lives in desperate battle for wealth and possessions. As critical as we can be of such myths as Santa Claus, they do serve a purpose of pushing back on social values that emphasize competition, wealth over virtue and winners over losers. Perhaps if Christians were to take a stronger stand against these selfish values and insist on a society that believes more strongly in the practice of charity and social justice, the Santa Claus myths and other extra-biblical elements in the Christmas story would not be needed.

There is nothing wrong with a congregation singing Christmas hymns or listening to their children repeat memorized verses about the birth of Jesus in a pageant. Those who criticize such activities do not exhibit the spirit of Christ, but another influence.

It is a good thing for families to gather, exchange gifts and enjoy a feast that reminds them that God loves humanity so much that He gave His only son, came into humanity as one of us in order to provide salvation from our evil existence. Christmas, whether it is on December 25 or any other day, is ultimately a reminder of God’s gift of life given out of His own flesh. It recalls to mind the genuine spirituality of all good things, and that is a memory much needed in our world today.

So, light a candle, sing a carol, hang up a cross, enjoy roast duck or lamb or a vegan roast; whatever your taste, whatever reminds you of the presence of Jesus in your life (even if it is grumpy objections to papal rituals) and …. Dear Reader, Have a Merry Christmas!

Monte Sahlin is chief executive officer of Adventist Today. He is a fourth generation Adventist, an ordained minister in the Seventh-day Adventist denomination who has served the church for more than 50 years.