West-Central Africa Division Collects Over 80,000 Signatures for Every Child Everywhere In School Petition 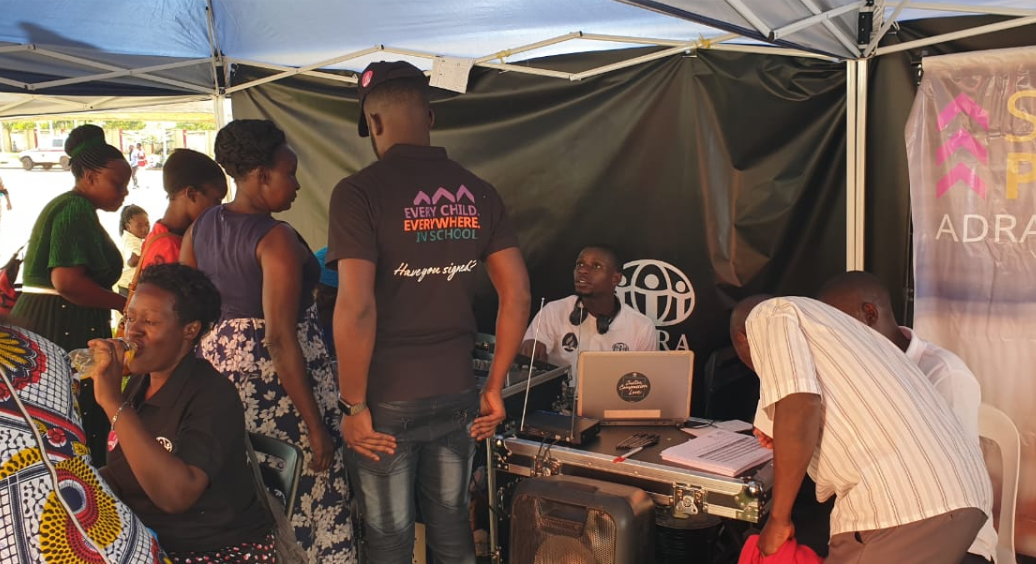 From ADRA – 4 February 2020 | University students went out on the streets of Côte d’Ivoire (Ivory Coast), West Africa, during one week, gathering petitions to promote education for all children in the world.

“We started campaigning on Monday, January 20, and midway into the week we collected over 16,000 sign ups,” says Emmanuel Amegnito, associate regional director and regional liaison for the Adventist Development and Relief Agency in the West Africa Division. “Friday, January 24 was the International Day of Education, and it was fitting for us to celebrate the day with a sermon on Sabbath. Dr. Juvénal Balisasa, WAD education department director, preached a message entitled ‘Every Children Everywhere in School’, and following the service, roughly 1,500 people went out into six districts of Abidjan to get sign ups.”

On Sunday, January 26, more than 250 young people, along with WAD’s president and division officers, visited Yopougon, the biggest community in Abidjan, going door to door to talk about the Adventist Church and the Adventist Development and Relief Agency’s joint campaign.

“The day concluded with a big parade by our youth in celebration of the weeklong endeavor,” Amegnito says. “When we tallied the results for the weeklong event, we got over 62,000 signatures.” He added that prior to the emphasis week on education, 17,000 additional signatures were collected, so in total, over 80,000 petitions were signed.

Amegnito, a native from West Africa, believes in the value of education, but many people don’t share his conviction.

“Education is important but is difficult to implement, especially in countries like Chad, Niger, Mali, and Mauritania, which are the poorest countries in Africa. Education is not promoted in those countries and the communities, which are mainly Muslim, unfortunately believe that the only place a girl belongs is marriage or at home,” he says.

Since those countries are experiencing political and economic difficulties that have worked adversely, many of the children don’t have access to school to learn the basics, he added. Additionally, many children he says are orphans who don’t have the means to go to school and are without hope.

Last year, Amegnito visited the northern parts of Mali in Tombouctou and Rhahous where ADRA overseas education projects which help families understand the importance of learning.

“Many children and young people, particularly girls, who lacked the opportunity or resources to go to school, are now going to school because their families understand the importance of education for their children,” says Amegnito.

“We feel that education can be a way for the Adventist church and ADRA to build a strong relationship with the government,” he says, “For now, as we foster and develop ongoing collaborative efforts with government officials, it is our hope to help children in West Africa go to a safe place where they can freely learn and be educated.”

In April 2019, the West-Central Africa Division officially launched its advocacy campaign at the Université Félix Houphouët-Boigny in Cocody, Abidjan, where Jeanne Kopieu, deputy director of Education for All at the Ministry of National Education, Technical Education and Vocational Training who is an avid supporter for learning, served as speaker.

“She was impressed that the Seventh-day Adventist Church has the second biggest education system in the world, and she promised to give her fullest support to have petitions taken across Côte d’Ivoire,” Amegnito recalls.

Dr. Elie Weick-Dido, president of the West-Central Africa Division offered his remarks at the launch saying, “Education should be free, quality, so that tomorrow we can have quality people who stand for truth and who are ready to give their best to everything they are doing—it’s what Africa needs right now.”

“I call for everyone to take this work seriously so that the future can be better than what we’re seeing today,” appealed Celestin Tea Gokou, president of the Université Félix Houphouët-Boigny, who also supports the campaign.

Students who met with petitioners, shared many stories and testimonies of how education has impacted and benefitted them.

“One student I was told received a sponsorship through Compassion International, a Christian organization, who helped them go to school. He signed the petition and prays that God helps a child near and far to have the same opportunity to obtain an education that he has,” says Amegnito.

“Many young people who are able to be in school are convinced that signing up is going to impact the globe and children will receive more opportunities and resources to be in school,” he says.

For more information about the “Every Child Everywhere in School” petition, visit ADRA.org/InSchool.

About Every Child Everywhere in School Campaign

Every Child Everywhere in School is a global, Adventist-led movement to ensure that every child has access to primary and secondary education and completes their education so they can fulfill their God-given potential. The Seventh-day Adventist Church and ADRA teamed up to extend the life-changing power of education to the most disadvantaged children—children in conflict zones, children in remote areas, children living in extreme poverty, and children who face discrimination because of their gender, disability, or ethnicity. To date, 264 million children don’t go to school. Unless something is done, they will remain out of school and the number of children not in school will rise. For more information and/or to show your support, visit ADRA.org/InSchool.