Poll Results: What Do You Hope For at the Next General Conference Session? 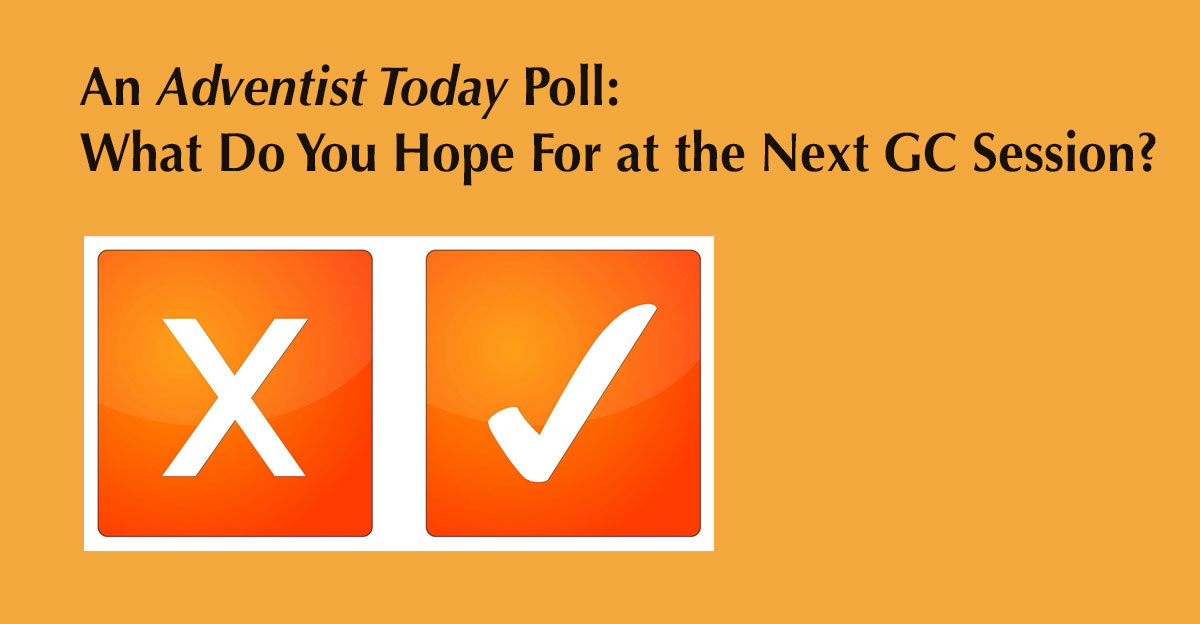 As you think about the upcoming General Conference (GC) Session in the summer of 2020, the highest decision-making body of the Seventh-day Adventist denomination, what do you anticipate? What do you hope and pray for?

The Adventist movement has been around for 175 years now. Some of the younger people elected to leadership at this Session may well see it complete two centuries. It has more than 20 million members. When we add children in Adventist families and adults who identify themselves to poll-takers and census workers as Adventists although they are not officially members, the entire faith community worldwide is larger than 30 million.

As it grows, the Adventist faith must deal with increasing diversity and cultural complexity. It has to find new ways to pursue the mission of Christ in the world, or it begins to die. Can it find the structural flexibility and the mature leadership necessary to survive? This is the unwritten agenda that faces every GC Session.

In a survey of readers conducted by Adventist Today in the Fall of 2019, respondents were asked (among other, unrelated questions); “What do you hope will happen at the 2020 General Conference Session next summer?” They were given five options in response to this item and they could select more than one, if they wished.

More than one in four (27 percent) said they hope that “There will be broad change in structure and program, but not in doctrine.” There was no significant variation in how age groups responded to this item, and the same was true relative to the location of respondents around the world.

Four in ten (40 percent) said they hope that, in addition to change in the denomination’s structure and program, “There will be changes in at least some problem doctrines.” No attempt was made to identify which specific doctrines might be in view, but respondents from Africa, Europe and the South Pacific were more likely to choose this response, while younger respondents around the world were less likely to do so.

Only seven percent of respondents indicated that they are pleased with a continuation of the status quo: “The top leaders will be re-elected and the Adventist denomination will continue in the direction it has for the last five years.” Respondents from Asia and Africa were more likely to select this response, as were younger respondents around the world.

About the same number of respondents (8 percent) indicated they hope for an outcome not among the four main choices by selecting “Other.” There was no opportunity for them to describe these additional options, but these respondents clearly wish for an outcome that moves beyond the debate on women’s ordination and the “compliance” procedures adopted by the GC executive committee in recent years. Respondents from Latin America and Asia were more likely to give this response, as were younger respondents around the world.

There were a total of 924 responses to this survey, which means that at the 95th percentile of reliability, the standard allowance for sampling error is three percentage points, plus or minus. The demographics of this sample were heavily tilted toward North America, Europe and the South Pacific, as well as toward an older profile over 55 years of age. Seven in ten respondents are active members of the Seventh-day Adventist denomination, while only 11 percent are employees of the denomination or one of its institutions. These are mainly middle-aged and older lay leaders who are professionals, middle management and owners of small businesses.

What Do These Data Mean?

A strong base of well-educated and dedicated local church leaders in North America, Europe and the South Pacific see a need for change in the GC leadership, less focus on conflict over ordination and defense of non-doctrinal traditions, and greater focus on how to move the denomination forward, especially in the growing majority of Earth’s inhabitants who are urbanized, educated and becoming more and more secular.

How many members from the southern hemisphere agree with this perspective? This will only become clear as events unfold in Indianapolis next summer. As delegates puzzle over what has happened at the recent Annual Council meetings, think about the growing trends in their region of the world and pray for the influence of the Holy Spirit, the concerns listed here will come to mind. There are too many Adventists who share these views for them to be ignored.