The Thin Line Between Truth and Compassion 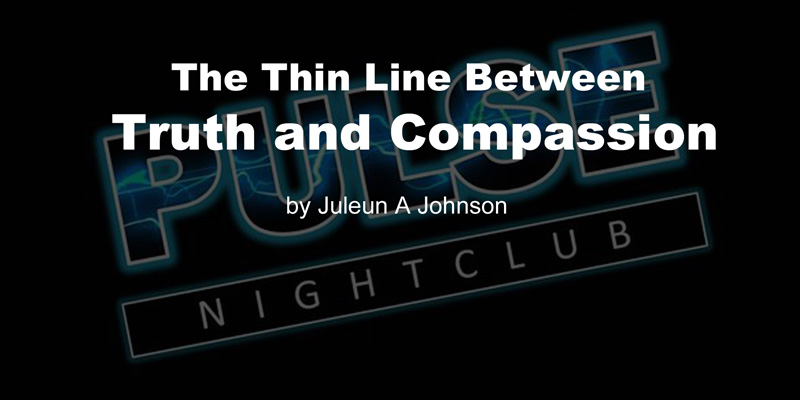 Please welcome Juleun A. Johnson as a new columnist at Adventist Today. Juleun is a chaplain at Florida Hospital in Orlando. He is a graduate of Oakwood University and Andrews University, and earned a D.Min. from Claremont School of Theology in Spiritual Care and Counseling. He’s written for Ministry magazine, Insight magazine, and Best Practices for Seventh-day Adventist Pastors in North America, as well as a devotional book entitled Five Minutes on Purpose, available on Amazon.

It has been said that there is a thin line between love and hate. I would offer that in these tumultuous times there is an even thinner line between truth and compassion.

The past few weeks have seen some great people on the globe take their rest, such as Muhammad Ali, C.D. Brooks, and Jan Crouch. Each of these has been esteemed for being champions of hope, truth, and meaning. To be sure it’s easy to celebrate people we have something in common with. Ali’s trash talk was the soundtrack for an emerging society that sought equal opportunity for everyone. C.D. Brooks had a larger than life personality, and homiletical skill second to none. Brooks was a media innovator, appearing on Black Entertainment Television (BET) at a time when the world was watching. Jan Crouch’s partnership with her husband to provide access to the life saving gospel of Jesus Christ is astounding. The true impact of the TBN television ministry and The Holy Land Experience are amazing. Only heaven will reveal the impact of all those affected.

In recent days the Orlando community has been wrestling with the questions above. Some have attempted to raise the truth about sexuality over the truth about compassion.

I went to a city-wide memorial service that honored the victims of the massacre in the Pulse nightclub. I watched with bated breath at how the clergy represented would describe their feelings in light of this tragedy. One pastor spoke of how people needed to be respected. Another spoke of the need to bond together. The ice had been broken, said another, and now she could say that she was a lesbian, part of a group that lobbies for LGBT rights. She expressed a sincere thanks to all who were in attendance. To be sure many people in the club that evening were LGBT, but not all of them.

After reflecting on this experience, I realized that there has to be a way to be compassionate to people I don’t know, agree with, or understand. It really comes down to several words: respect, curiosity, and compassion. Being a Christian Seventh-day Adventist, (the Christian is first on purpose) I realize that I am called to honor Christ in everything that I do. It also means serving the least, lost, left out and marginalized. I do not understand what it’s like to be gay. However, I do know what it’s like to lose a loved one. I do know what it’s like to live in a very tense time. I must first respect people because they are… people. I may not subscribe to the tenets and ideologies of the LGBT community. But bullets see no color or creed. Our love for people must be evident, even if we disagree.

One of the major principles of serving people in my field as a chaplain is having a non-anxious, non-judgmental presence. I Timothy 1:8-11 lists several sins: homosexuality is not the only one listed. To judge people based on the list in this passage would empty out the pews of the Seventh-day Adventist church, and other churches, too. To judge a person for his or her choices and actions would make me judge and jury. I am neither. One of my favorite Bible verses is Isaiah 33:22:

I cannot judge. I can only live by the light that I have received and feel convicted by the Holy Spirit to live by.

One of the most impressive things in the past few days of being a responder to this tragedy was seeing on Facebook how many Orlando area Seventh-day Adventist Churches have opened their doors to the families of those who died in this massacre. The churches are not asking questions, not taking names, just being Christians. Maybe there is something to be gained from this tragedy, if we are learning to be compassionate.

For me being Christian trumps being a Seventh-day Adventist. Caring for people is more important than truth. Kindness is actually a way to live. One of my favorite quotes says, “If we would humble ourselves before God, and be kind and courteous and tenderhearted and pitiful, there would be one hundred conversions to the truth where now there is only one.… The Saviour is waiting for us to do this.” Testimonies for the Church Vol. 9. p.189.

Please don’t get me wrong. I still believe the truth will set you free (John 8:32). I do believe that allowing the Holy Spirit to loose the shackles of all who are bound is still the best policy. But working with the same principles and practices we’ve always used will yield the same result. I would invite all to give true compassion a chance, thus offering others an opportunity to see the true reflection of the God we serve.