Faith through Art in Mjøndalen, Norway 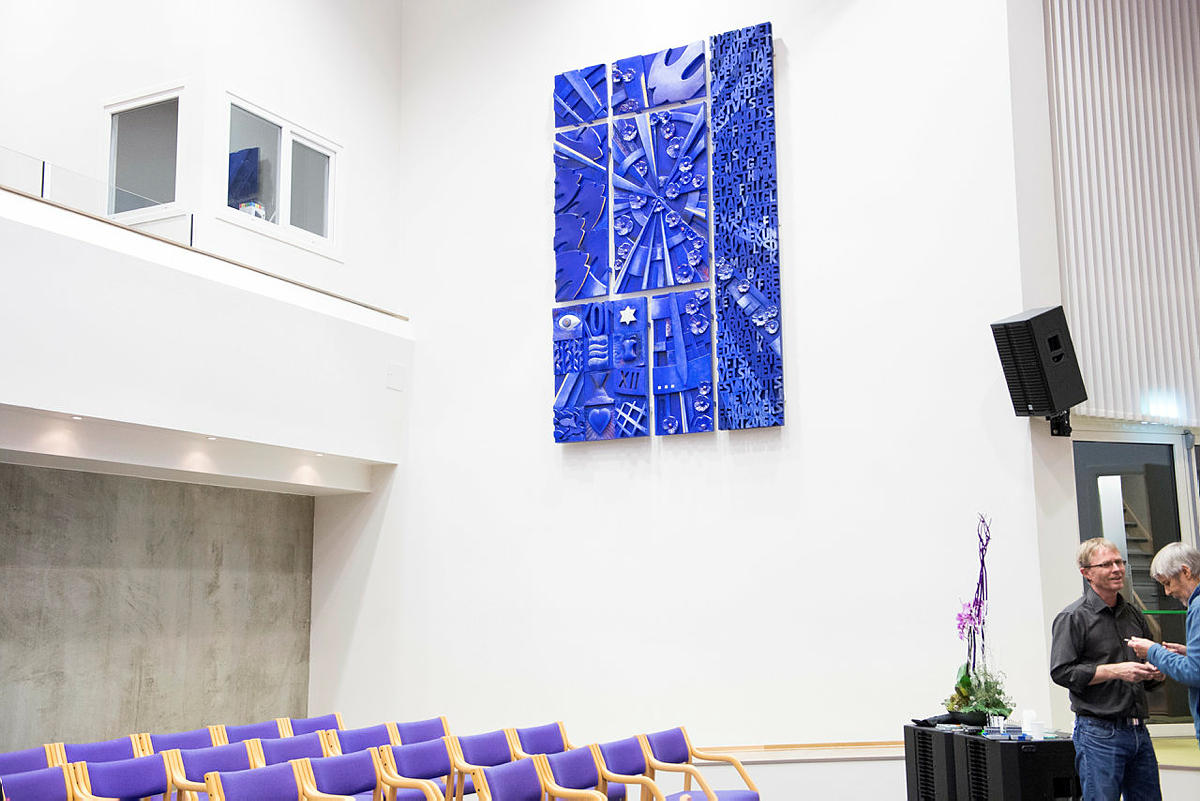 From TED News, June 15, 2016:    “A little bit up. Straight forward.” With a steady hand Tor Magne Eilertsen maneuvered a large fork lift in the main sanctuary of the Mjøndalen Seventh-day Adventist Church. There were shouts from excited members of the decoration committee as large, wooden elements were mounted on the walls of the church building. When completed, four panels made up a red circular installation with religious symbols and quotes from the Book of Revelation. This is just one third of a large installation depicting Bible themes.

The installation marked the completion of 18 months of skilled work. More importantly, it is an expression of the personal faith of Adventist artist Dag T. Hansen. For the Mjøndalen congregation it also expresses a desire to convey their faith through graphic symbols, not just through words and music.

Hansen has always been an artist, but not always an Adventist. While at art college in the 1980’s he developed a specialty in wood carving, but also fell in love with another student, Gry Shjøll, who happened to be an Adventist. With Gry as a spiritual coach, biblical faith became an ever more important part of Dag’s life until, during a long mountain trek, Dag was baptized by an Adventist pastor. That fitted well with his longing to live close to nature and the God of nature. Dag and Gry married and since 1995 have worked together on Haaberget farm where he has his studio.

The decision to become an Adventist was not an easy choice. However, for Hansen it was not good enough to go with the flow. He has brought his spiritual journey into his artwork by depicting a fish swimming against the current.

Hansen is secure in his faith, but he is not a man who talks much. However, through his art, he is proclaiming his faith. The new artwork in the Mjøndalen Church is definitely proclaiming Adventist faith even if the messages contained in it may require some time looking and thinking. Large pieces of art are not easily ignored. “The art is there in the church. Everyone who enters the sanctuary must see it,” Dag states.

That is why he uses clear symbols without wanting to be too forward. He wants Adventists who look at the art to recognize central tenets of their faith. At the same time, he hopes that those with no Adventist background will be inspired to reflect on the large themes of life.

Near the entrance to the sanctuary three squares in tones of red with a golden rim represent the Word of God, the fall and the Sabbath. On the south wall a rectangular, deep blue group of panels depict a bright light with strong rays, reminding worshippers that Christ is the light of the world. Along the rays are flower petals of different sizes and shapes. “I think the flowers represent the members of the congregation,” Hansen says. “We are so different. Some are lonely, others are bruised in various ways, but we all belong to the fellowship of believers.” The symbol of the flowers is carried over into the red group of panels — a reminder of the new earth where we will experience a perfect world with God.

One of the rays in the blue group of panels turns into the hand of a large clock. The time is five to twelve, a timely reminder that the second coming of Christ is near. “We must make a choice before it is too late,” says the artist.

Hansen did not want to give the artwork a specific title. He did not want a title to limit viewers thinking. However, it is not difficult to understand why the working title of the art is “From Eternity to Eternity.” The observant viewer will recognize elements present in all three groups of panels. The apple with one bite taken in the first group of panels becomes just the core after human greed eats it away in the blue group. In the last group that symbolizes the New Earth, the apple is once again whole.

The most prominent part of the last group of panels is the Scripture reference to Revelation chapter 21. “He will wipe away every tear from their eyes, and death shall be no more, neither shall there be mourning, nor crying, nor pain anymore, for the former things have passed away…. Behold, I am making all things new…. Write this down, for these words are trustworthy and true.” (Revelation 21:4-5)

Hansen recognizes that there will be varying opinions regarding the installation. He wants to provoke thought. “People must not only find the art beautiful. They must be provoked into thinking,” he concludes.

Certainly those who visit the Mjøndalen Church will get food for thought as they ponder the artwork. They will also recognize that the Bible is central to Adventist faith and that the Second Coming of Christ is the great hope.

The TED News is a news service issued by the communication department of the Adventist denomination’s Trans-European Division with offices in Saint Albans, England.