The Three Angels of Grace

The Apostle John wrote in the prologue of his gospel, “The Word (Jesus) became flesh and dwelt among us, and we beheld His glory . . . full of grace and truth” (John 1:14). Throughout our history, we Seventh-day Adventists have preached countless sermons and taught unnumbered Sabbath School classes focused on truth—but, sadly, not so much on grace.

That needs to change.

If God’s agape love is the central unifying element for the everlasting good news (John 3:16), and without love everything else is a “noisy gong or a clanging cymbal” (1 Cor. 13:1), then God’s grace is the unifying element in all our teachings.

And that means grace must be found even in a central passage of Adventist eschatology: the three angels’ messages of Revelation 14.

Then I saw another angel flying in the midst of heaven, having the everlasting gospel to preach to those who dwell on the earth—to every nation, tribe, tongue, and people—saying with a loud voice, “Fear God and give glory to Him, for the hour of His judgment has come; and worship Him who made heaven and earth, the sea and springs of water” (Rev. 14:6-7).

Authentic worship is at the heart of our relationship with God. Only one entity in the entire universe is worthy of worship: the Great Creator of everything in heaven and earth.

At the end of creation week, God “looked over all He had made, and He saw that it was very good!” (Gen. 1:31). Now, however, we walk through the “valley of the shadow of death” everywhere (Psalm 23:4). God’s wonderful world is tainted with ugliness and cruelty.

What went wrong? Our first parents believed the promise of mysterious hidden knowledge—not knowing that the devil’s so-called “knowledge” would kill their second-born son, turn the pristine glory of their garden home into a bleak wasteland, and drive them into a jungle of pain, heartbreak, and despair.

When the One who loved them most came looking for them, they could not bear to see His face. Original sin exploded into original blame and finger-pointing. “It’s not my fault!” sprang from lips terrified of punishment.

God listened to their anguished self-defenses and pronounced that Divine justice must be served. But divine love said, “Wait! I have a plan already prepared to save you from this death!”

In that moment, God’s everlasting gospel of love and grace was launched. The guilty pair walked out of Eden into a future of thorns, stony ground, and painful childbirth. They could no longer see God face to face, but they still could know His presence. The Spirit of God that had moved upon the waters now moved upon their hearts, reminding them of the Creator’s love. They wore on their shoulders coats of divine compassion, covering their spiritual nakedness. Grace supplied their need. Agape love gave them tangible hope.

The everlasting gospel calls all the world’s inhabitants back to worship the Creator in a relationship of compassion, forgiveness, and love.

The defeat of sin

Another angel followed, saying, “Babylon is fallen, is fallen, that great city, because she has made all nations drink of the wine of the wrath of her fornication”(Rev. 14:8).

Viewed through the lens of the gospel grace, the second angel’s message is a celebratory shout of victory, hailing the conquering power of agape love over the self-serving spirit of Babylonian pride.

God’s ultimate triumph over evil has always been a vital element in the gospel of grace. Twice in the Old Testament, divine judgment completely overturned the ancient Babylonian culture, foreshadowing the second angel’s double announcement, “Babylon is fallen—is fallen!”

The first literal fall happened when the Lord confused the language of ambitious builders hoping to make a name for themselves by piling up oven-baked bricks in a tower tall enough to reach “the heavens” (Gen. 11:4). The second was the complete overthrow of Nebuchadnezzar’s great empire by Darius the Mede.

A common spirit drove the builders of both the tower and the empire, feeding their ego-hungry pride by erecting magnificent monuments to their prowess. The same spirit of Babylon—building empires for self-glory—remains with all humanity, even today.

Babylon can be traced back to Eden: the deceiver’s promise of hidden knowledge and power. Adam and Eve bought the lies and reaped the bitter harvest. From then on, spiritual Babylon has ruled in the life of every child born to Adam’s race.

Pride and arrogance drive earthly ambitions. If not for the grace of God, we would all be lost forever, doomed by our self-righteousness and self-congratulating pride. This global sin-virus may be nearly impossible to recognize in oneself, and completely impossible to heal, regardless of heroic human effort or determined resolve.

According to the second angel, spiritual Babylon falls in defeat to the triumphant march of gospel grace! Grace eternally frees every individual who hungers and thirsts for righteousness and the things of God. “Because you belong to [Christ Jesus], the power of the life-giving Spirit has freed you from the power of sin that leads to death” (Romans 8:2 NLT).

At the beginning of Jesus’ earthly ministry, Satan attempted to trick the Son of God into sinning, just as he did with Adam and Eve in Eden. Each temptation was calculated to trap Jesus with the ingredients of spiritual Babylon: appetite, pride, and presumption, mixed into a poisonous concoction of rebellious indulgence.

Three times, Jesus met the tempter with the force of faith and integrity. Each victory in the Judean wilderness restored the lostness of Eden. Christ’s victory opened the door of spiritual victory for every soul searching for hope. “Thanks be to God, who gives us the victory through our Lord Jesus Christ!” (1 Cor. 15:57).

Jesus told His disciples that the “gates of hell … shall not prevail” against them. Even the gates of hell are no match for the power of the gospel. Jesus instead promised them the “keys of the kingdom of heaven” (Matt. 16:18). The keys are agape love, amazing grace, divine forgiveness, and complete cleansing from sin’s polluting presence. Jesus gives the church these keys—love, grace, and forgiveness—as the primary means of opening locked-up hearts, set free to come alive for his kingdom.

The cup we needn’t drink

Then a third angel followed them, saying with a loud voice, “If anyone worships the beast and his image, and receives his mark on his forehead or on his hand, he himself shall also drink of the wine of the wrath of God, which is poured out full strength into the cup of His indignation. He shall be tormented with fire and brimstone in the presence of the holy angels and in the presence of the Lamb. And the smoke of their torment ascends forever and ever; and they have no rest day or night, who worship the beast and his image, and whoever receives the mark of his name”(Rev. 14:9-11).

How is this terrible announcement a message of God’s saving grace? A careful reading reveals an often-missed detail: “If anyone worships the beast and his image, and receives his mark on his forehead or on his hand he himself shall also drink of the wine of the wrath of God” (vv 9-10).

It’s easy to miss one little word embedded in that sentence: “also” (v.10a). Why is also there?

The answer is grace.

Jesus emptied the cup of God’s wrath on behalf of all humanity in Gethsemane. He prayed, “O My Father, if it is possible, let this cup pass from Me; nevertheless, not as I will but as You will” (Matt. 26:39). In obedience to the Father’s will, and faithful to the purpose of the everlasting gospel, Jesus drank the bitter cup of suffering to the very dregs. No one else needs to drink this cup because Jesus already drank it for every soul! He drained the cup of God’s hatred of sin so we could drink from the ever-flowing fountain of agape love.

The third angel’s message is fully anchored in the everlasting gospel of redeeming grace poured out in the blood of Christ. The gift of heaven was Jesus’ drinking that dreadful cup of suffering so we could receive total freedom from the condemnation of sin and guilt.

So even the terrible warning of the third angel is a gift of God’s agape love.

The patience of the saints

In a final summary, the third angel concludes, “Here is the patient endurance of the saints; here are those who keep the commandments of God and the faith of Jesus” (Rev. 14:12). This passage echoes the grand hope of Jesus’ promise in Matthew: “Sin will be rampant everywhere, and the love of many will grow cold. But the one whose love endures to the end will be saved” (Matt. 24:12-13).

What great assurance! When Jesus arrives as King of kings and Lord of lords, the redeemed, patient, love-filled saints of all the ages will shout with one voice of triumph, “Hallelujah! Glory to God! Home at last!” And they shall never cease announcing the everlasting gospel of grace forever and ever. Amen. 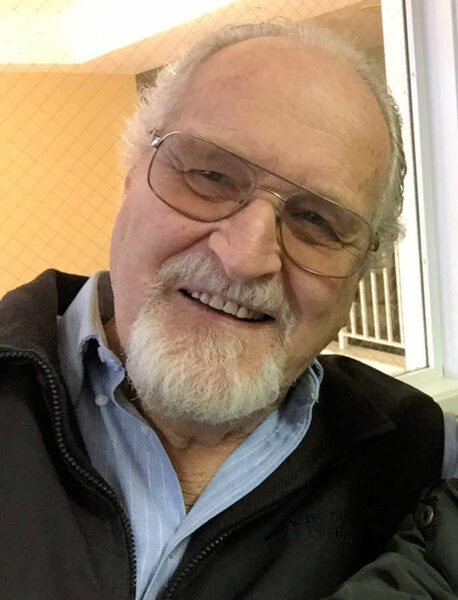 Loren Fenton was raised as a farm kid in the Yakima Valley of Washington. He studied theology at Walla Walla University, and later earned M.Div. and D.Min. degrees from Andrews University. After 40 years as a Seventh-day Adventist pastor/evangelist, Loren and his wife, Ruth, retired to College Place, Washington, in 2011.