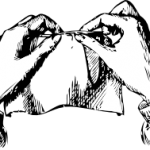 I still recall it as if it happened yesterday, rather than years ago. I was just a little girl then. Abba had died suddenly, leaving Mama and me alone. Immi cried every night, and I huddled near her on the sleeping mat, trying not to cry, too. Trying to comfort her. That’s what I remember most about those dark days and weeks. That and the hunger.

After what seemed to me like years, but today I know it was only about a month, Immi stopped crying. She has since begged me to forgive her for neglecting me shamefully, but I have since become a mother myself, and I tell her there is nothing to forgive.

She started trying to figure out ways to feed us, or at least (I now know, now that I’m a mother) to feed me. Thanks be to the Holy One, we had our little house. Abba had paid for it, and no one could take it from us. We grew some vegetables, and we had a fig tree. But grain for bread, let alone occasional milk or even meat, would take money. Immi took in mending, and did washing, and cleaned ladies’ houses. We managed.

That is to say, we ate. She didn’t make enough to buy new cloth from the weaver. She made some clothes for me out of her second robe, but I outgrew them quickly. She patched and mended…but we began to look like beggars.

Tabitha was the sweetest woman I have ever known. She found ways to help all the local widows and orphans, and what is most important of all, she found ways to do it that would save our self-respect. I still remember helping her to wind yarn to “pay for” a new tunic she made me. I wouldn’t be surprised if she wound it all over again after I was gone. But she never let me know that.

She got the women together into a kind of little “guild” of our own, expertly finding out what each one’s skills were, and helping to find work each could do. Immi and the other women held their heads up, and their backs straighter. From being frightened that their children would starve, they grew to caring for each other’s children, and for the old women, too. Not to mention a few old men who could no longer work.

I was twelve (and was beginning to be of some use) when a woman named Diana came rushing into our house with a white face, calling for my mother. Immi barely caught Diana before she fell to the ground. She began to weep and wail in a way that made my heart pound with terror. It was a minute before she could get out intelligible words, and they still didn’t make sense to me.

I stood frozen for a minute, then raced out the door and down the street to Tabitha’s house. A crowd was gathering outside. Some were wailing hysterically, but some were silent, as if in shock—as I was. I heard confused snatches of phrases.

“We have her upstairs.”

Then I heard Peter’s name.

It flew through the group. Two men were detailed to go to Lydda. Some of the women went upstairs. My mother and Diana came, more or less composed, but they wouldn’t let me go up with them.

I waited. Some went home. Some waited with me. But Lydda was eleven miles away, and we all knew Peter wouldn’t get here until late.

Immi came out, and took me home.

We were lying on our mat, but not sleeping, in a night that seemed too dark to be real, when we heard Diana again. “Come, come! Peter’s here!”

We jumped up and ran out with her. Too many of us crowded into Tabitha’s house with him, weeping, telling him (all at once; I doubt if he understood a word!) all she had done for us. I tried to show him the embroidery on the neck of my first grown-up woman’s robe.

We went, with many a backward glance. I felt a strange compulsion—probably just reprehensible curiosity, but I gave into it. In a very unladlylike fashion, not at all fitting with my new gown, I climbed a nearby tree and tried to see inside Tabitha’s window. All I could see was Peter’s back. He was kneeling on the floor by Tabitha. I didn’t know what we all thought Peter could do. She’d been dead for half a day!

But I saw it with my own eyes. I will never forget. Peter said to Tabitha’s dead body, “Tabitha, get up.”

I couldn’t see Tabitha’s face, but I saw her legs, and I saw them move. I saw her sit up. I saw Peter stand, take her hand, and help her up. I scrambled back down the tree and joined the stunned crowd as Peter and Tabitha appeared in the doorway.

The silence hung over us for an unbelieving pair of minutes. Then the cheers and tears and rejoicing began. I cried harder than I had when she died.

The Holy One of heaven had done a miracle. For us. For all the poor, unnoticed, disrespected, uncontributing poor ones. I had always known that what Tabitha did mattered. But I didn’t know God thought it mattered, too!

I decided then and there that I would give my life to doing the work Tabitha did. After all, she couldn’t live forever. And when she did die, old and full of days, I devoutly hoped, I would be ready to take her place.