The Real History of the Investigative Judgment Doctrine 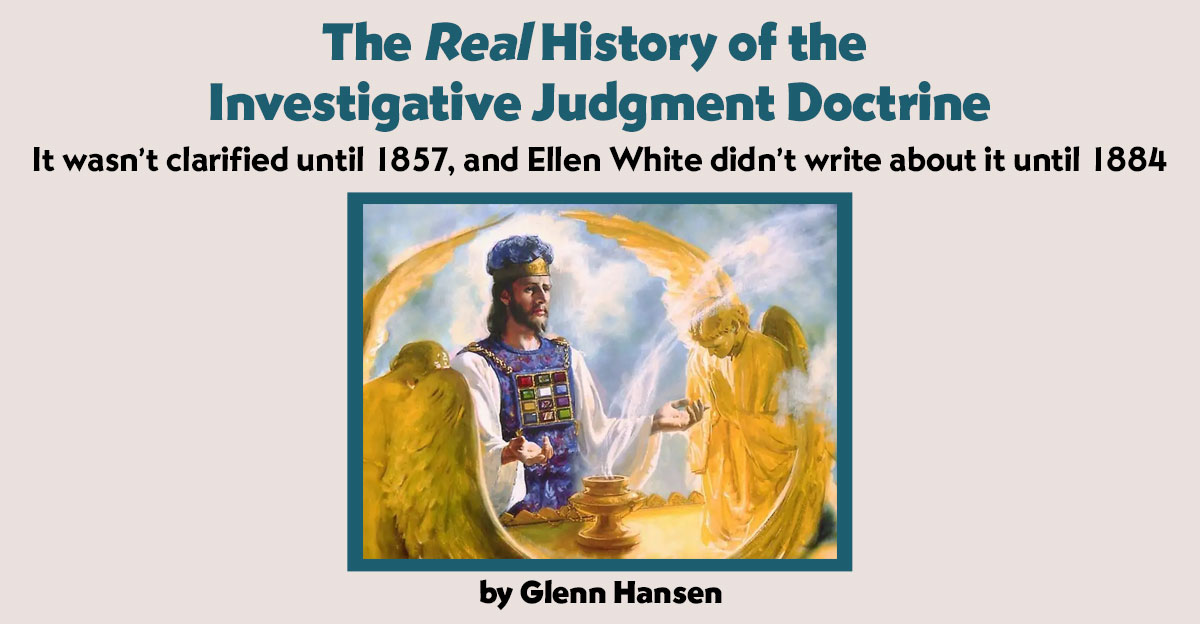 When most Seventh-day Adventists think of the investigative judgment, they think of Hiram Edson’s iconic insight in a cornfield after the night of the Great Disappointment. But Edson’s vision of Christ entering the inner sanctuary of the heavenly tabernacle didn’t mention the investigative judgment. Edson, along with O.R.L. Crosier and Dr. Franklin B. Hahn, developed the teaching that Jesus had entered the Most Holy Place, which was then published in an article by Crosier in a Millerite publication called The Day Star.1 There is no mention of the investigative judgment in that article or in Edson’s account of the cornfield experience. Edson saw that Jesus had “a work to perform in the Most Holy Place,” but he wasn’t sure what it was.2

As early as 1841, Josiah Litch had advanced the notion that judgment could happen before Christ’s second advent. Citing Hebrews 9:27, Acts 10:42, and 2 Timothy 4:1, Litch wrote: “Nor is there a text which presents the judicial scene of judgment after the resurrection. On the contrary, the Scriptures can be harmonized on no other principle than that every man’s doom is fixed before his resurrection.”3

The development of these ideas into what came to be called the investigative judgment begins with Elon Everts. Ordained to the gospel ministry during the fall of 1853 in New Haven, Vermont, his name was a familiar one in the Review, with several letters describing his evangelistic labors in Vermont. Everts eventually migrated to Round Grove, Illinois, where he continued his evangelistic work, including time with J.N. Loughborough, and died in February of 1858 at age 51.4

James and Ellen White first discussed Christ’s Most Holy Place ministry with Everts during a wagon ride in Illinois in 1856.5 Everts was quite certain Jesus was in the heavenly sanctuary, but he was unsure about what he had been doing there for more than a decade.

Everts began to flesh out his ideas in a “communication” published in the Jan. 1, 1857, issue of the Advent Review and Sabbath Herald. He worked from 1 Peter 4:5-6: “Who shall give account to him that is ready to judge the quick and the dead. For this cause was the gospel preached also to them that are dead, that they might be judged according to men in the flesh, but live according to God in the spirit.”

Since the Scripture speaks of a judgment of both the living and the dead, Everts reasoned that Jesus had been judging the dead of the ages since 1844, offering this text as evidence that judgment must take place before Christ’s return during the final generation of life on Earth. Here Everts first floated the phrase “investigative judgment” to attempt to explain what Jesus was doing—the first time it appeared in an Adventist publication.6 He followed this with another article on the investigative judgment, dated June 4, 1854, but not printed in the Review until June 11, 1857.

The first full article addressing the investigative judgment came from James White, who picked up the themes of Everts’ “communication” just a month later, in the January 29, 1857, Review, with an article titled “The Judgment.”

James White’s argument was based on his understanding of the blotting out of sin, the record of sin in heaven, and the “lot” of Daniel 12:13: “For thou shalt rest, and stand in thy lot at the end of the days.” He listed more than 70 Old Testament passages from The Englishman’s Hebrew Concordance, some of which indicated that “lot” referred to the position of the judged. Daniel in his lot was a reference to his already having been judged. James White followed Everts in the idea that Scripture taught that there would be a judgment of both the living and the dead, based on 1 Peter 4:5-6, and that this judgment had started with the righteous dead in 1844.7

A pamphlet printed in Battle Creek in 1872 refers to the investigative judgment as Principle XVIII:

That the time of the cleansing of the sanctuary (see proposition X), synchronizing with the time of the proclamation of the third message, is a time of investigative judgment, first with reference to the dead, and at the close of probation with reference to the living, to determine who of the myriads now sleeping in the dust of the earth are worthy of a part in the first resurrection, and who of its living multitudes are worthy of translation—points which must be determined before the Lord appears.8

Uriah Smith wrote at length about the investigative judgment in his 1877 work The Sanctuary and the 2300 Days, which saw in Daniel 7:9-10 the basis for the investigative judgment: “Thus the cleansing of the sanctuary involves the examination of the records of all the deeds of our lives. It is an investigative Judgment. Every individual of every generation from the beginning of the world thus passes in review before the great tribunal above. So Daniel, describing the opening of this scene, calls it a work of judgment, and expressly notices the fact that the books were opened.”9

In a sweeping statement, Smith joined several biblical motifs: “We have already seen that the cleansing of the sanctuary, the investigative Judgment of the saints, the blotting out, or remission, of sin, and the finishing of the mystery of God, are all one and the same thing. We now make the additional statement that this is also the atonement.”10

His posthumously published The Judgment: Its Events and Their Order includes an entire chapter on the investigative judgment.14

Ellen White expanded her investigative judgment teaching in the 1888 edition of The Great Controversy, introducing a unique array of passages to support and illustrate it: “The coming of Christ as our high priest to the most holy place, for the cleansing of the sanctuary, brought to view in Daniel 8:14; the coming of the Son of man to the Ancient of days, as presented in Daniel 7:13; and the coming of the Lord to his temple, foretold by Malachi, are descriptions of the same event; and this is also represented by the coming of the bridegroom to the marriage, described by Christ in the parable of the ten virgins, of Matthew 25.”15 She also appealed to Matthew 22:11 to support her investigative judgment teaching.16

Other early treatments of the investigative judgment include Uriah Smith’s influential Daniel and the Revelation (1897) and S.N. Haskell’s The Story of Daniel the Prophet (1901), The Story of the Seer of Patmos (1905), and The Cross and Its Shadow (1914).

Ellen White’s 1911 edition of The Great Controversy remains the primary source for the investigative judgment teaching, but she was largely silent on the subject of the investigative judgment until 1884, long after it had been studied and written on by Elon Everts, James White, J.N. Andrews, and Uriah Smith, who were the principal proponents of the teaching. While Ellen White later enhanced and gave credibility to the teaching, she did not originate it.

Glenn Hansen retired after 13 years of teaching English in Central China. He lives on the China-Myanmar border.