The Parable of the Lost Sock 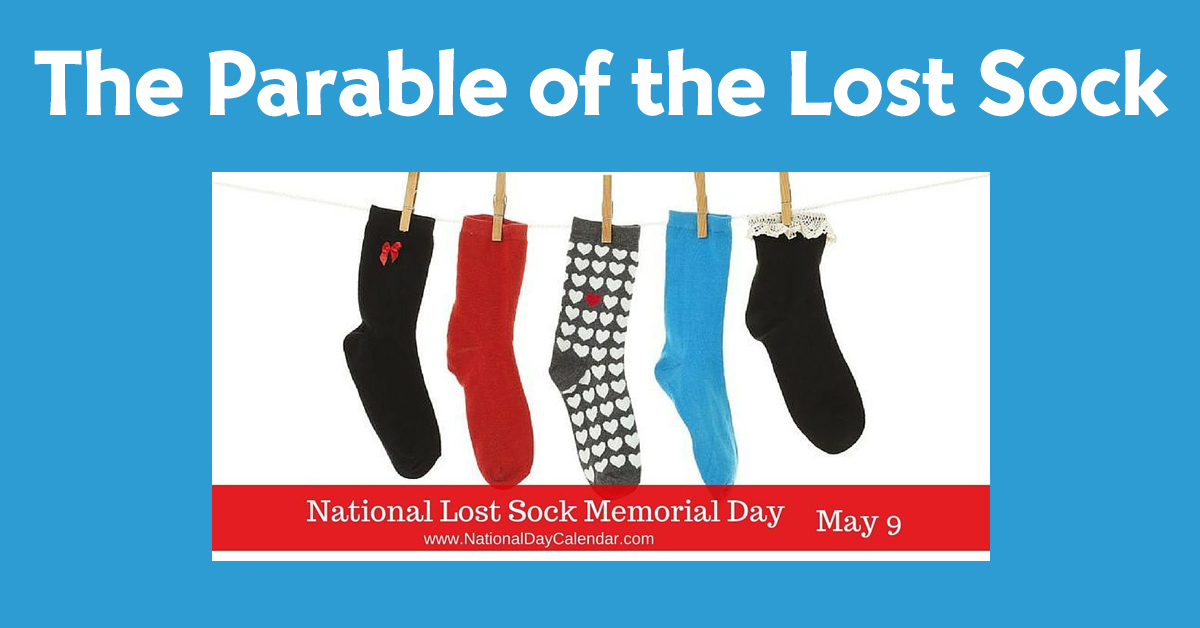 It will soon be May 9. Why is that day special?

Because someone has designated it as National Lost Sock Memorial Day.

Suggested ways to celebrate it:

I’ve not checked, but suspect there may even be a greeting card to commemorate this day.

There are many mysteries – some profound, some less so. In the latter category, few are as perplexing as the mystery of the missing sock. It seems no matter how hard one tries to keep a pair of socks together, invariably one sock ventures into an unknown place never to be found again.

The conundrum inspired this humble offering. This is a parable not found in Holy Writ, though you may, if you wish, compare it to Luke 15:8-10.

There once dwelt, in a land where air was clean and sun bright, a solitary man. In his possession was a wondrous machine, by which he was able to wash his raiment in a manner other than beating it upon rocks, which is what his forebears had done.

Moreover, he had another machine like unto the first, which sat beside it, by which he was able to dry his garments with such haste his forebears would have marveled.

Unlike his forebears, he depended neither upon weather nor time of day. The machines helped him cleanse raiment whenever it became soiled, whether of his own doing or from the doing of others.

At a time that escapes memory, he found that if he kept the waters cold that flowed into one of the machines, he could mix garments without separating them, as he might otherwise be wont to do. The colors would not run together, as do the waters where the rivers meet the sea. Rather, as in a rainbow, the colors remained separate and faded not.

He was grateful that, unlike some tasks, the sweat of his brow was not required in this work.

And it was good.

That which was not so good is that, from time to time, a member of his garments became separated from its fellows. Most of the time this came to pass, it was one of the pieces of raiment that covered his feet, that came between his feet and the shoes he wore to go about.

This thing caused him to put fingers to head, forthwith to scratch. But then he thought the better of it. For it came to him that there were fewer numbered hairs on his head than in former times, so his hands came down and scalp remained untouched.

If his countenance was not fallen, however, it was, forsooth, perplexed.

For he knew not which machine hungered for his raiment and, although perchance desirous of something larger, would be content with something as small as a single foot covering, whether it be white as snow or of color.

He considered each machine.  On the inside were ledges and similar protrusions upon which articles of garment might lodge.

There were also places of darkness, but he did not shine a light.  For his remained under a bushel, though he knew not where. Perchance somewhere in the outer part of the house that sheltered the also wondrous machines, like unto chariots, but far better than chariots, which he possessed and in which he sat and traveled about, sometimes in haste.

Rather, he thought to feel about as a blind man, groping with fingers this way and that. He was able to turn the round part of each machine, but only with great effort.

Whereupon he reasoned thusly: If I do injury to my body, it may not have the wherewithal to make itself whole again. Whereas, if I lose my raiment, it may suffice that I replace it. So he ceased from his labors, and desisted.

If the lost sock were not found within a machine of laundering, he searched other places in his abode; perchance it had fallen from the basket of clean raiment when he carried it into deeper parts of the dwelling. He searched high and low, but mostly low, for that is where a sock would have fallen, had it become separated from its fellows.

He also considered that he was taking leave of his senses, and misplacing a sock was but a foreshadow of things to come. That thought pleased him not at all.

Oft he would find the missing sock, whereupon he would think to contact kin with the news that the lost was found, so they could rejoice with him. That which was once part of a pair had been restored.

If it occurred to him that one was the number most lonely, he did not put it into words.

But then reason returned, and he decided to content himself with pouring from a pitcher juice from whence cometh wine when it is red, sitting himself down in a chair not of his making, and making work another wondrous box from which came sound that was pleasing to the ear and mightily soothing.

His soul was at peace.

Yet he wondered if his forebears had vexing problems with foot coverings like unto his.

And how so small a thing could matter so much.

For coin and sock were like unto one another in that the breath of life dwelt in neither.

A coin, it is true, could buy all manner of goods and was therefore worthy of search when it became lost, and its owner rejoiced when it was found.

But a sock provided warmth and comfort to its wearer, and perchance shoes lasted longer when it was worn.

So who was to say which was more worthy, coin or sock?

Furthermore, he reasoned, a sock may be more oft lost than is a coin. Or so he thought.

If a lowly coin could become part of a parable of the Master, perchance hope yet abided for a lowly sock.

Which is why, forsooth, this parable must needs be told.