The Musician Behind “Journey to Worship: The Musical”

By Debbonnaire Kovacs, Nov 25, 2015     Our music arts guru, Carole Derry-Bretsch forwarded a wonderful short piece to me, written by David Griffiths; part bio, part essay on worship style, and part raison d’etre for his upcoming musical, “Journey to Worship.” I was intrigued, and obtained an interview with Griffiths. You can read his own piece below, at the end of my story. You can also learn more, visit his websites, and listen to him sing and play if you visit the Poetry & Arts Dept above. 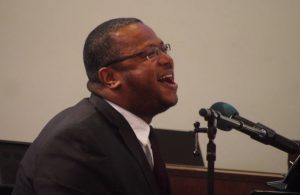 When he was six years old, in first grade, David Griffiths wrote his first song, using only the black keys of the piano. It’s doubtful that he knew then he was using a pentatonic scale, one that is used for many of the old songs known in the United States as “black spirituals.” He just knew he liked it. In second grade, an older brother explained to him about the guitar chords printed above the lines in a songbook, and David decided he could play those chords on the piano with his left hand, and the melody with his right, and “I would sound like I played better than I did!” Again, little David was not the first to invent this…

In this space, we have several times met people who began to know their life’s callings when they were very young. David Griffiths has an advantage many of those people did not have: one of the most influential people in his youth was Bruce Freeman, who ran a youth group called The Light Company, and specifically set out to teach youth to use the arts for Christ. Sometimes, Freeman took Griffiths and a few others to Bill Gothard youth seminars in Maryland. “They were taking the Bible and making it practical. This was so exciting to me! I had been to a lot of Revelation Seminars. I understood the teachings and doctrines. I didn’t understand how to make Christianity practical for everyday living. So our teacher [Freeman] said, ‘Why don’t we make a musical?’ So we did!” Griffiths enthused.

So, he explained, during high school he was involved in the making and performance of musicals, theatrical, and other presentations which are the “genesis of what he is doing today.” Freeman also taught them about small group fellowship, as The Light Company met weekly. Today, before a major event, Griffiths, during the weeks his community choir are rehearsing, uses ice breakers and other activities so the group will get to know each other as well as their music. “Then,” he says, “the Bible studies after the event are more meaningful.”

After high school at Takoma Academy in Silver Spring, Maryland, Griffiths attended Andrews University for two years, then Oakwood (then College) for two years, and then Columbia Union College (now Washington Adventist University), graduating with a degree in theology. He taught English in South Korea for a year, then came back to do formal music study, culminating in a stint at Peabody Conservatory for a masters in vocal performance. (Since his father also worked at La Sierra and Loma Linda, he jokes that he has the Adventist universities pretty well covered.)

All along the way, Griffiths was also learning about a multitude of different worship styles and practices, and realizing that many people could benefit from a broader view of this topic.

For the past six years, Griffiths has been music minister at the large 19th Street Baptist Church in Washington DC, where his latest creation, an amazing musical called Journey to Worship, will be performed on December 5.

Asked if he faced criticism for the broadness of his outlook on the arts, Griffiths said, “Let me approach it this way. I have had an internal battle between what is appropriate and acceptable to God in worship and arts; at every juncture—it’s like a purifying process. I didn’t believe Western European art music was only way to glorify God. It’s like saying Spanish is the language of heaven. Musically speaking, being able to switch back and forth between classical baritone, jazz, pop, etc., and write in all those styles is valuable. I have become more comfortable with the concept that my worship life is personal and I will be criticized no matter what I do. I learned this in high school, but this is the first time I’m producing a musical, and I’m almost 50. I want to be more than just a Christian entertainer—I want to be functional. This is an opportunity to share a message; to tell a story that I feel helps people have more meaningful worship. I’m okay if it doesn’t make everybody happy, because all the people I admire have had to face criticism, too.”

Read on to hear David Griffiths speak more personally about life, worship, and his musical.

My Journey to Worship
By David Griffiths

Between my life as the child of an Adventist preacher and educator and my life as a church musician I’ve been exposed to a whole lot of worship—all kinds.
It all started back when we were living in La Sierra, California and my mom was taking a comparative religion class at La Sierra University. She decided to take me to many of the worship experiences she had to observe. I learned to chant Hare Krishna and I learned that so many people see God differently than I do.

This was especially significant to me because growing up I always felt different. My dad was from Cuba and my mom is from Jamaica. Dad was the first “Black” at many positions he held including head of the English Department at La Sierra and Dean of the Graduate School at Loma Linda University. So we were always visiting different churches. Dad would preach sometimes in English and sometimes in Spanish or Portuguese. Worshiping God in Spanish wasn’t more holy than worshiping him in English but it worked for people from that culture. It resonated with them as if it were the only way of doing things.

Whether language or style, many people considered their way of worship the only way and yet I found God in many styles and languages.
So after college when I chose to go to Korea for a year and teach English, I knew I would find out yet another way of approaching worship. I had no idea all that I would learn. I didn’t know that the world’s largest church was located in South Korea. I had never learned about the power of cell groups to make a church’s growth exponential. I had not lived in a place with the same approach to showing respect. But again I realized that there were things in my African American worship experience that I knew were part and parcel of authentic interaction with God that didn’t show up in Korea. They enjoyed singing and felt God’s Holy Spirit. But the style was different. Authentic connection with God, again I found, comes in all shapes and sizes.
And so today I have undertaken an awesome task. I have written a musical to share with faith communities around the country examining meaningful worship. It’s entitled “Journey To Worship: The Musical” and will be presented for the first time December 5, 2015 at 5:30pm at Nineteenth Street Baptist Church of Washington DC. I am looking forward to the support of my home church, Sligo SDA Church in Takoma Park, as well as Columbia Community Center where I served in ministry for the past two years, and the Denton Church of Free Adventists where I currently serve as pianist. As a Seventh-day Adventist musician God is allowing me to change the way the world sees worship and I pray that the songs and the lines of this production will help some prepare to stand in that great multitude that no man can number from every nation, kindred, tongue and people.

Learn more about the musical. For those too far away to attend, the program will be streamed at this website. It will also come out on DVD in 2016, and Griffiths hopes to take it on the road that year, so contact him at this website if you would like to see it at your home church or organization.