The Limitations of Science 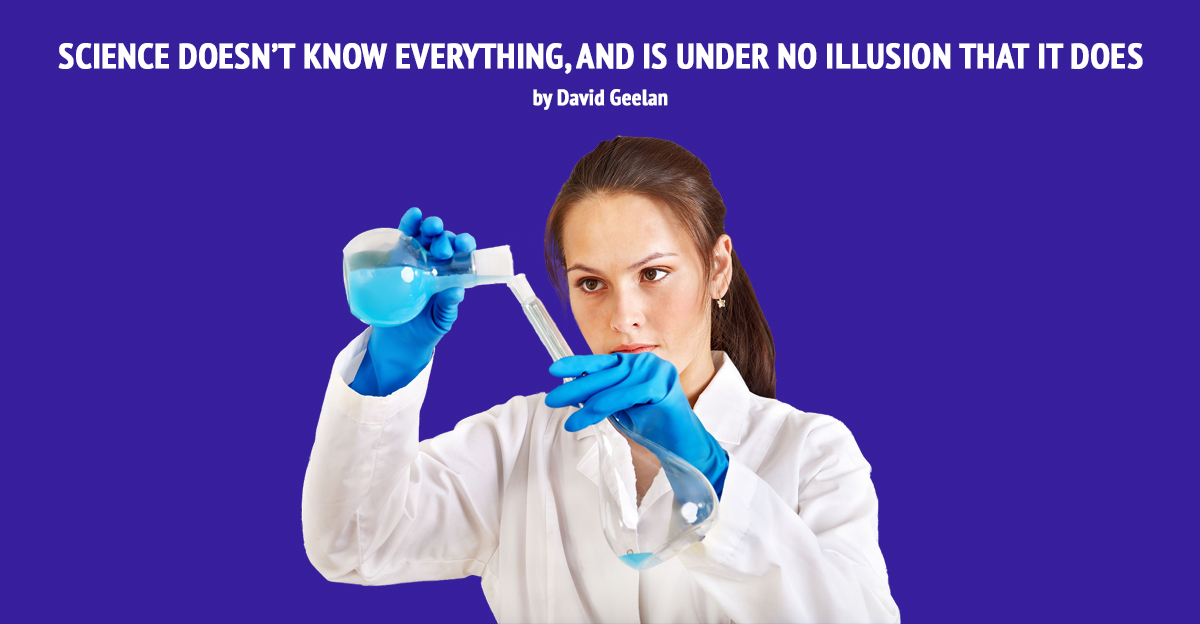 Both errors are unhelpful, and lead to misunderstandings. The notion that science knows everything – that, if something can’t be experimentally tested and verified, it’s not real – is called ‘scientism’. It ignores the fact that there are domains of meaningful, valuable knowledge outside the domain of science, including the arts and humanities. On the other hand, the notion that science thinks or believes it knows everything can lead to people accusing science unfairly of arrogance or of making claims it can’t back up.

I think I’ve talked before in this series of articles, in the context of science and religious faith, about biologist Stephen Jay Gould’s concept of ‘non-overlapping magisteria’. He sought to dissolve apparent conflicts between the claims of science and those of religion by suggesting that they each move in different domains of human experience, that each asks and answers different kinds of questions. Combining them was, Gould thought, as nonsensical as asking the mass of love.

The idea is a tempting one, and can be expanded to consider other domains of human action and thought. Asking whether Euripides is a better playwright than Tom Stoppard is a fascinating question in the arts, but not one that is susceptible to weighing and measuring and counting.

By understanding that there are many different ways in which human beings make meaning of the world around them, communicate and seek to make the world better, science can be ‘put in its place’ among the others.

Ideally, there should not be conflict between the various ‘magisteria’, but of course, at the edges there often is. In the case of religion, when the religious make claims about miraculous events that are amenable to scientific analysis, for example. These conflicts continue, but I have sought to suggest ways to conduct them as conversations rather than wars, assuming that those with different positions are good, sincere people, arguing in good faith.

One of the limitations of science, then, is that it is not the arts or the humanities or religion. It is specifically the domain of human knowledge in which we make the ‘instrumental naturalist’ assumption that natural systems and processes are regular and predictable and that we can make inferences about past events and predictions about future ones based on our understanding of natural laws. The laws themselves are human constructions, made and tested by human beings. They are fallible and subject to change and revision as either better evidence or a better idea becomes available.

All Models Are Wrong

But this is a feature, not a bug. The fact that science corrects itself is crucial. As statistician George Box said, “All models are wrong, but some are useful”. Others since have phrased a similar idea slightly differently: ‘all models are wrong: our job is to make them less wrong’. Science does not, I would argue, directly describe the natural world, but a human-constructed model of the natural world. More and more experiments, and better and better thinking, make the map fit the world better, but the fit is never perfect. The model is always wrong, but over time, due to the activities of science and scientists, it becomes less wrong… and it’s not-wrong enough to be useful.

Science is, to some extent, limited by failures of science education and of the media. If the media people consume tell them falsehoods about the nature of the world, or try to sell them scams or lies, and if their science education has not been good enough, or absorbed thoroughly enough, then science has limited ability to protect them from charlatans and dangers. Some of the behaviour we have seen from political leaders across a range of countries during the COVID-19 crisis (and, before the comments get started, I’m thinking primarily of Sweden and Brazil on the one hand and New Zealand on the other) has demonstrated the power of science when it is harnessed to protect lives, and its powerlessness in the face of other forces. Certainly the world is waiting on science, rather than any other domain of human knowledge, to come up with a vaccine and/or treatments for COVID-19… but the anti-vaccine movement is already mobilising to reject a vaccine if one is created.

Science is also limited in that it cannot, of itself, come up with ethical guidelines to control its own activities. Ethics are not something that exists in the natural world to be discovered. Ethics and morality arise in human cultures, and are constructed around valuing the lives, health, property and autonomy of others in ways that lead families and societies to thrive. It is likely that my next piece for Adventist Today will focus on moral reasoning.

The ethics of which research projects should and should not be carried out, whether harm can ever be justified in seeking a good goal (whether ‘the end justifies the means’) and whom science should serve most directly – individuals, governments, societies or humanity as a whole – must arise from ‘outside’ science, from human moral reasoning that is shared.

Science doesn’t know everything… and it is under no illusions that it does.

Science is an incredibly valuable tool. But it makes no sense to try to build a whole house with only one tool – we need others. Science works best when it is complemented by the arts, humanities, philosophy. Most here at Adventist Today would also argue that it works best when it works in concert, not conflict, with a rational religious faith.