The Hidden Agenda of Revelation 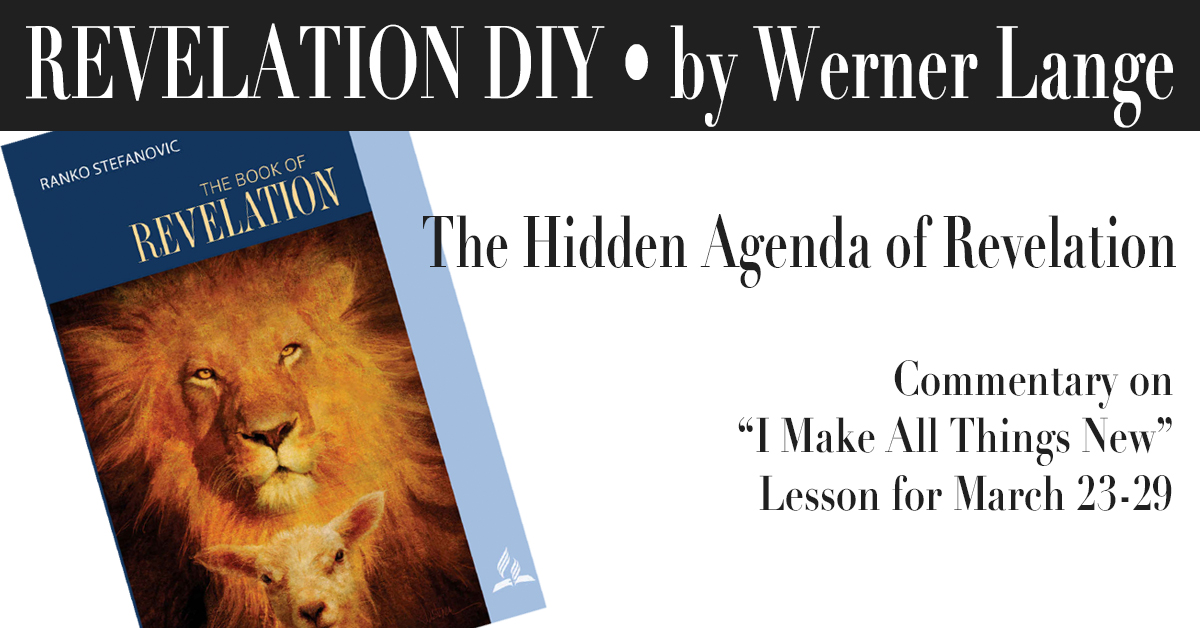 Besides the obvious theme of the Revelation (Satan’s fight against the faithful remnant of God’s church, cf. Rev 12:17), there is a hidden agenda. In the description of the seven last plagues it came to light already: the justification of God’s actions concerning the lost people of the last generation before Christ’s return (cf. Rev 16:5-7).

There’s a double problem for God in the end-time. Today, spiritually, there are still three groups of people: those who are resolutely on the side of Christ; those who are definitely on the side of Satan; and the large group of uninformed or undecided people. But when Christ returns, this third group must no longer exist—it must be clear who belongs to the redeemed and who to the lost people. And since God will arbitrarily shorten the lives of the last generation (as opposed to all previous generations, who had the opportunity to decide for Christ throughout their lives), the separation must happen in a way that at the end no one can blame God that he had not the opportunity to align oneself with him. The uninformedness of the last generation will be eliminated by the proclamation of the three angels’ messages, the indecision by the fact that the last events will be pushed to extremes by the activities of Satan’s demons and allies (cf. Rev 9 and 13; 16:13–14), which will no longer be restricted by God. Both the reactions of the inhabitants of the earth to the fifth and sixth trumpet events and to the fourth and fifth plagues will show that then the decisions for one side or the other have indeed been made definitively, for nobody will then convert himself to Christ any more (Rev 9:20-21; 16:8-11; see my interpretation of the trumpet events in the theme DIY 7A).

But God will continue his justification during and after the millennium. The redeemed will be given the authority to judge (20:4)–they will examine and decide all the cases of all lost people. Paul explained that the saints will judge the world and even the angels (1 Cor 6:2-3). God will explain (as a kind of witness) the reasons for his judgments and answer all questions of the redeemed, e.g., about their relatives and friends who were not saved. He allows a lot of time for this investigation—a thousand years. All redeemed will conclude that God could not have decided in any other way. He will be justified in his judgments (cf. Rev 15:4b; 16:7).

After the millennium the verdicts on all the lost people are proclaimed (20:12). Ellen White described that God will then show everyone in a panoramic view what Jesus did for their salvation. Everyone will become aware of his personal guilt, and all—even Satan—will acknowledge the righteousness of God’s judgments (The Great Controversy, pp. 666-70). God’s actions will be fully justified again.

What is the fire from heaven that will consume the lost (Rev 20:9b)? It is—as with Christ’s second coming—nothing else than the divine glory, which appears with his throne above the holy city (20:11; cf. v. 9; 21:2), and which they cannot endure because it is like a consuming fire (cf. Ex 24:17; Deut 4:24). Ellen White also saw it this way: “By a life of rebellion, Satan and all who unite with him place themselves so out of harmony with God that His very presence is to them a consuming fire. The glory of Him who is love will destroy them.” (The Desire of Ages, p. 764)

God lets the lost people and the fallen angels suffer the consequences of their decisions; he no longer protects them from those consequences. Those who are most hardened against God will also be most hardened against God’s glory, and must therefore suffer the longest; these are Satan and his angels (see Great Controversy, p. 673). In this sense, everyone will be punished according to his character and works (cf. 2 Cor. 5:10).

What more is important to know about Rev 20–22 is found in my elaboration which you can download here.