The Heritage Singers and The Collingsworth Family’s First Joint Concert

[Editor’s Note: This is Ms. Derry-Bretsch’s personal report and reflection on a recent special event in Dayton, Ohio.]

They gave out free tickets to anyone who wanted to attend. I was honored to be a small part of the outreach process. I started a Facebook page for the concert, and gave out a lot of tickets that way, besides all of those that Kettering gave out. But there were still some tickets left. Since I live in California, I knew no churches in the Dayton area. So I prayed that God would direct me to just the right church, as I went down the phonebook. I called several churches, and no one answered. I finally reached a secretary of a Nazarene Church, and told her what I was wanting to do. She said that her church choir would love to come. I was so happy, knowing that God had directed me to the exact church that needed to be there.

I know that my Adventist family has heard of, and attended many concerts of the Heritage Singers over the last 45 years. But I am not sure how many have heard of the Collingsworth Family. This group is comprised of parents, Kim and Phil, and their four kids – Brooklyn, Courtney, Phillip, and Olivia. Their concerts include amazing close harmony vocal numbers as well as instrumental numbers from Kim on the piano,

Courtney and Brooklyn on the violins, and Phil on the trumpet. Kim has been named the number one pianist in gospel music for several years in a row.

The concert was held at the gorgeous Benjamin and Marian Schuster Performing Arts Center, in Dayton Ohio. My husband Don, Jan Judd, and I were honored to be guests of the Heritage Singers for the concert. The opportunity to be with both groups backstage, and for the concert was such an incredible gift. I was blessed to be a part of the Heritage Singers in 1978, so the group has always had a very special place in my heart. But since I first heard the Collingsworths about three years ago, I have been so blessed by their music. They truly are my other favorite group. So I can’t express my gratitude for the chance to see both of my favorite groups together in concert.

The song “Fear Not Tomorrow” is the first song that I heard from the Collingsworth Family, and it’s one of my favorites. (Listen to it here.) I requested that the  Collingsworth Family do the song that night and they did. I sat and watched with tears streaming down my face, as I praised God in my heart, for always being there for me, and that I have nothing to fear about the future, because He is always with us.

Have you ever had musicians, or someone that you admire, that you have wanted to meet for a long time, only to be totally disappointed when you did meet them? Well, I can tell you from personal experience of knowing Max, Lucy, and the Heritage Singers, that who you see on stage, is who they are. Max and Lucy live their lives only to serve and praise Jesus, as do all of the singers. They will never know how many people they have led to Jesus through their music, and through their lives of service, until they get to heaven.

I can also tell you that the exact same thing is true for the Collingsworth Family. From the second we met Phil and Olivia backstage, and watched Kim, Phillip, Brooklyn, and Courtney do levels, and rehearsal, we could see the kind of people that they were. After they all greeted the Heritage Singers, Kim came over to Jan and Me, and talked to us for about fifteen minutes. It was like we were old friends, just seeing each other again after being apart for a while. 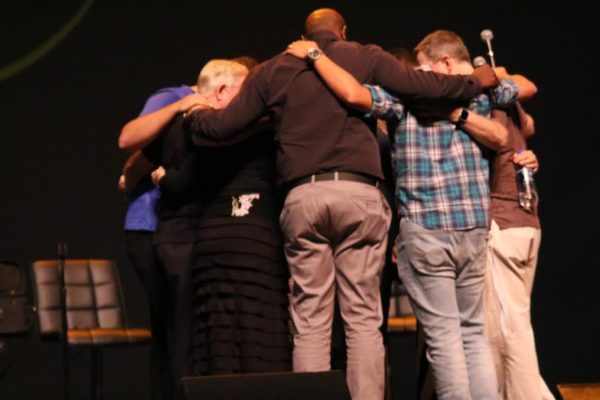 One of the most precious moments of that Sabbath afternoon was when Phillip Collingsworth and all of the Heritage Singers stood together with their arms around each other’s shoulders before the concert, praying that God would truly be glorified in the event.

After the concert, we all went to an amazing restaurant in Dayton – “The Wheatpenny”. They had the most awesome pizza. The groups had so much fun talking together, getting to know each other better, and having us tell them that we want to have another joint concert.

If you would like to invite either of these groups individually or jointly to your church, or for a community outreach program, go to:

Photo album of the concert

I have to share something very special. As a thank you to the Kettering Adventist Hospital for sponsoring the concert, Max and Lucy sent 100 Heritage Bears to Kettering Children’s Hospital.

I would also like to thank Kettering Medical Center, Kettering Adventist Healthcare, Jarrod McNaughton, and Fred Manchur for doing something so unforgettable for your community. I hope that other areas of our country will take your lead, and share this amazing concert with their community too.