The Eagle Has Landed 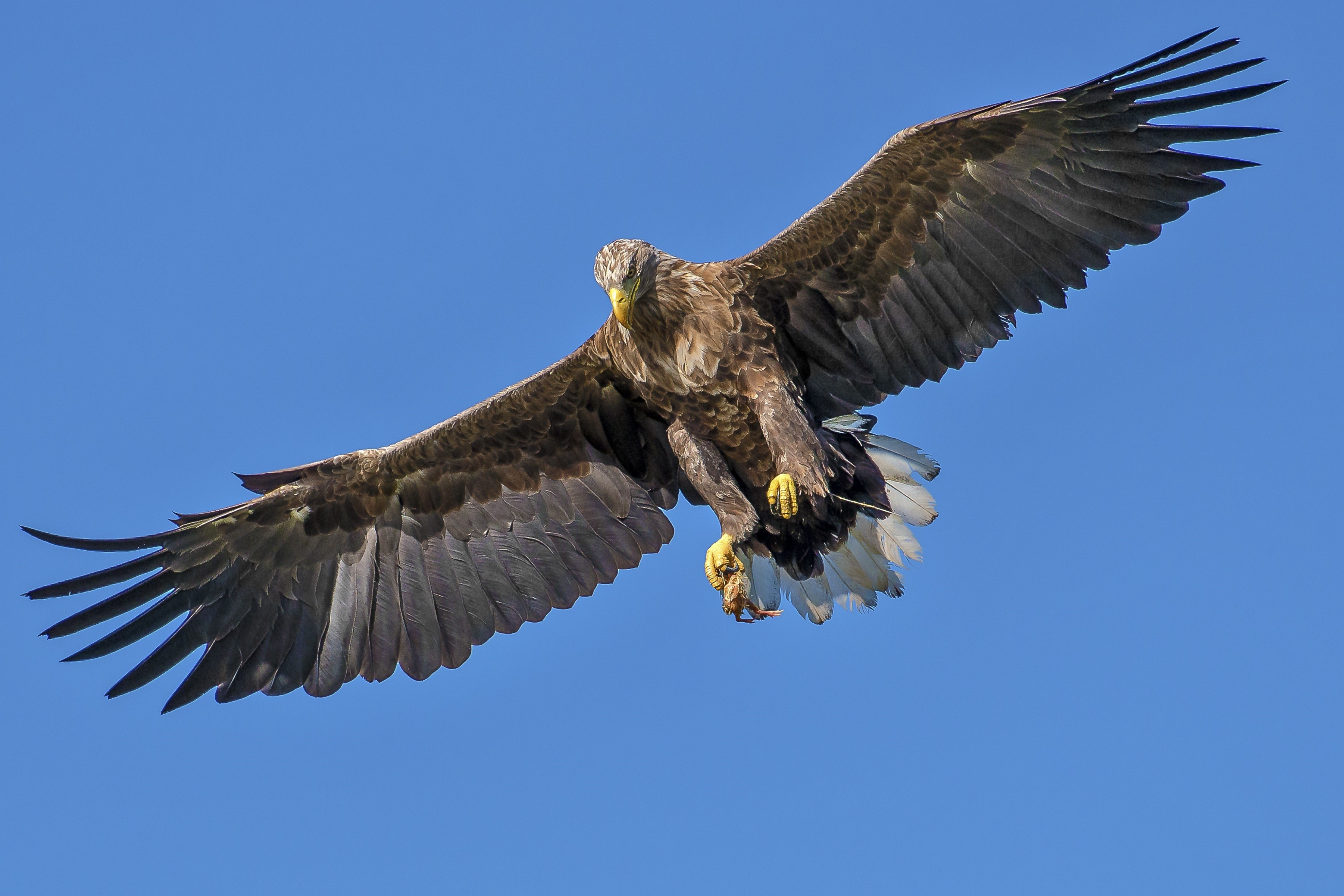 The eagle is purportedly the only bird that responds to rain in a unique way: when it rains, it flies ever higher to get above rainclouds, rather than remain below, at the mercy of the rain. Which gives fresh meaning to Isaiah 40:31: “… they shall mount up with wings as eagles…”

Sheep usually travel as a flock, and are known for their docility. Eagles usually fly alone, and are considered anything but docile.

Since the advent of small, lightweight video cameras, astonishing recordings have been obtained that were previously only imaginable. The descent of an eagle is one such example. If you have not viewed this 2-minute video of the world record flight of an imperial eagle plummeting from the top of the Burj Khalifa, world’s tallest building (2722 feet, in Dubai, UAE), to the outstretched arm of its trainer on the ground, treat yourself.

It appears that the bird’s power dive, near the end of the clip, takes about 16” (from around 1:36 to 1:52). If the eagle descended from about 2400’—it dropped a bit from its initial elevation in the early part of the video—its speed would have been about 150 fps (feet/second). However, its descent was not vertical. Not knowing its angle of descent, I cannot determine the length of the hypotenuse/slope. I suspect the bird’s top speed exceeded 150 fps.

The terminal velocity (defined as ‘the constant speed that a freely falling object eventually reaches when the resistance of the medium through which it is falling prevents further acceleration’) of a skydiver in facedown position is 122 mph. Golden eagles regularly reach speed of 150 mph in dive.

The fastest bird is the peregrine falcon, which, in dive, may achieve speeds over 200 mph.

But, not to be outdone (after all, The Guinness Book of World Records was compiled by humans), Felix Baumgartner, Austrian skydiver, jumped from a helium balloon on October 14, 2012. He set world records for skydiving from an estimated altitude of 24 miles and reached estimated top speed of over 840 mph.

“He clasps the crag with crooked hands;

Close to the sun in lonely lands,

Ringed with the azure world, he stands.

“The wrinkled sea beneath him crawls;

He watches from his mountain walls,

An eagle’s vision is legendary. Note the ability of the eagle in the video to spot its falconer from great distance. Eagle eyesight is estimated at 4-8 times stronger than that of a human being. The raptor can spot a rabbit from a distance of over 3 km.

It has been said that, if a pine needle or leaf falls in the forest, an eagle will see it, a deer will hear it, and a bear will smell it.

We are told man was created slightly lower than the angels. How much lower is a matter of conjecture.

Books like The Guinness Book of World Records might be a source of celestial mirth among angels, who must know that our planet’s records of speed, strength, knowledge, etc. will ever pale in comparison with what transpires in a parallel, unseen universe.

Humans consider the speed of light (about 300,000 km/sec.) to be the maximum velocity achievable. We measure cosmic distance in light years. But celestial reality must be quantum leaps faster.

Consider what happened when King Nebuchadnezzar had the three Hebrew worthies cast into his fiery furnace. He saw a fourth figure, one whom he recognized as divine. That figure was presumably already in their presence, or slipped the bounds between heaven and earth with the speed of thought.

What transpired during the prayer of Daniel, as recorded in Daniel 9? The angel Gabriel seems to have traveled between heaven and earth in the time it took Daniel to utter his prayer. Also likely at the speed of thought – or nearly so.

What do we make of the ability of Christ to walk on water, and, at the end of His ministry, to ascend from earth? His ability to appear and disappear (as on the road to Emmaus post-crucifixion)? Certain laws appear not to have affected Him at all.

Sir Isaac Newton (1643-1727), who articulated some of those laws, had this to say: ‘In the absence of any other proof, the thumb alone would convince me of God’s existence.” I suspect Newton would not have been surprised at the abrogation of those laws by a select few.

Recorded miracles seem to have been wrought almost invariably for others. Indeed, just as iniquity arose from a preoccupation with self, so its ultimate annihilation comes from the preference of others over self. Dying to self so that others may live. That is the essence of Christ’s sacrifice. Of the gospel.

No less a witness than Paul attested to this. Despite his life of service post Damascus, he was not granted removal of his own ‘thorn in the flesh.’ Perhaps that thorn was allowed to remain to keep him ever mindful of the need for Someone to watch over him in the briar patch of life.

For surely the all-seeing Eye that notices a sparrow’s fall and raptor’s descent takes in that which happens to humans.

Lest the pride of exclusivity spread its toxicity, let us remember the checkered history of the chosen children of Israel, and the counsel to the church of Laodicea as recorded by John the Revelator. And these words of the Master: “Other sheep have I, not of this fold.”

Perhaps no less awe-inspiring than miracles of Holy Writ is the transformation of a heart of stone to one of flesh. That goes on even in our time, often at unknown time and place.

We may only someday know the full extent of the working of the Spirit in the hearts of men and women.