The Case for Easter Saturday 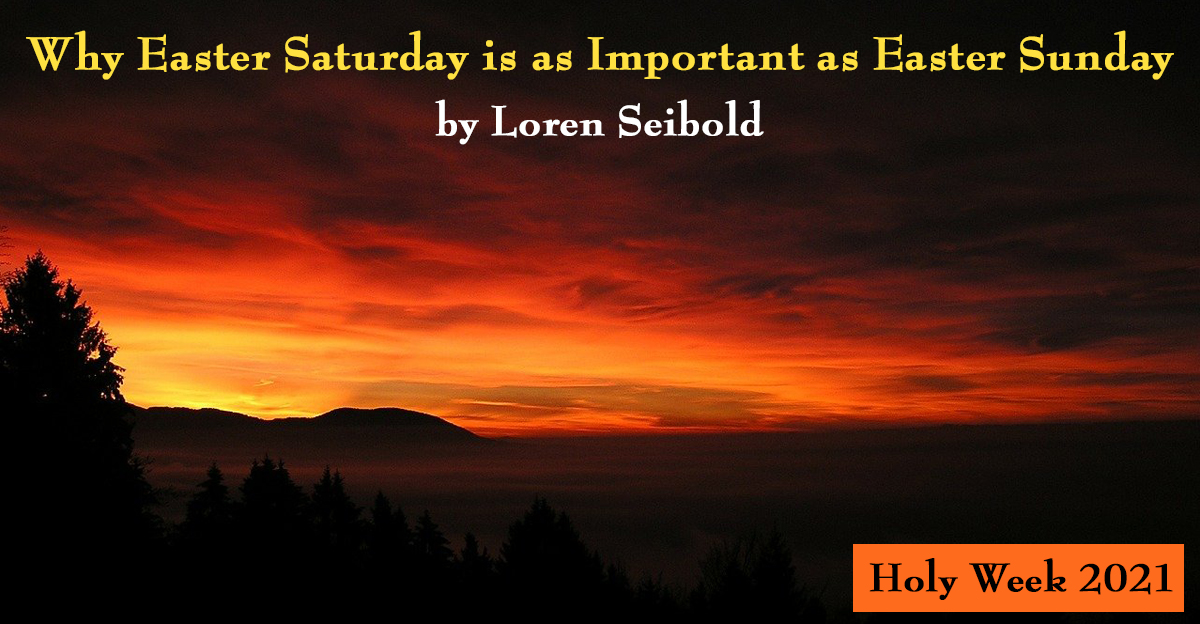 Years ago, in the week before Easter, I saw my next door neighbor in the yard. He said, “Hey, Loren: Are you going to be celebrating Good Thursday this week?” “Good Thursday?” I couldn’t figure out what he meant. He said, “Don’t you Adventists do everything a day early?”

He earned a big guffaw from me, and and I chuckle about it whenever I remember it. Compared to the rest of the Christian world, we do our weekly worship a day early—or, I think most of us would say, they worship a day late.

In spite of having it pounded into my head since I was a child that Easter was bad because it led to Sunday worship, I still love this holiday. The Bible is perfectly clear that Jesus arose from the grave on the first day of the week, as an example of what will happen to us who believe in him.

I wish Adventist churches would celebrate Easter—the early Christian church did, after all, and I’m not sure why we can’t.

At least some of our churches celebrate Easter Saturday instead. Like my neighbor, people might be puzzled why; they would say Christ didn’t actually do anything that day!

Since we don’t yet celebrate Easter Sunday, let me make a case for Easter Sabbath. I argue that Jesus made just as great a contribution to our salvation on that Sabbath of Easter weekend as he did on Sunday morning.

And what, you may ask, did Jesus do on Easter Sabbath that saved us?

He remained dead that day

Utterly, completely dead. He died a death that he had no reason to die. All because he loved us and wanted us to live an eternal life that we could never earn on our own.

It’s an understanding that much of the Christian world has lost. All the emphasis in most of Christianity is on Easter Sunday. And we Adventists love that too, of course. What happened on Sunday morning was a joyous, hopeful event in the Easter weekend. It tells us that death is defeated. It reminds us of God’s power to recreate. The event of Sunday morning is proof that the thing that we most fear has no power over us, and what we most hope for—to come alive with others we love and have lost—is ahead of us.

But let’s not forget that Sunday morning is meaningful only because of what happened on Saturday. If Jesus hadn’t been dead that day—completely, totally dead, so dead that everyone assumed he was gone forever—the resurrection couldn’t have the meaning it does for us.

It’s an odd story, from the world’s point of view. How contradictory to the spirit of this world for the hero of the story to die! And even odder to make that death the center of your faith. It is “a stumbling block to Jews and foolishness to Gentiles,” says Paul (1 Corinthians 1:23). What good, ask the logical Greeks, is a dead hero?

But in this strange story the hero dies. Jesus Christ, who was by his own testimony one with God, would never have needed to die. He did it because it was absolutely necessary for us.

If we really stop to analyze what happened there, we’ll understand something that is not immediately apparent. To begin with, while Christ was a man, he was not only a man. As he said, “I and my Father are one.” And the natural state of being for God is alive. He is the giver of life, the possessor of life.

The death of immortality

For human beings, holding unto life is a struggle. From the moment of the conception of the life of a human being, death waits somewhere along the road.

The opposite is true of God. God is the essence of immortality. He cannot die. So if we remember that God was in Christ, we have to realize that the strange thing about that weekend is not that this God-man named Jesus came alive, but that he died in the first place. In suffering death he did something that was unnatural to him. And in order to leave no doubt in any of our minds about Christ’s total sacrifice, his Father allowed him complete death through Easter Saturday.

It is only by reference to Christ’s remaining in the tomb for the entire Sabbath rest day–resting there, if you will, until his followers would be through with their day of worship–that resurrection Sunday has any meaning at all. The entire Easter event revolves around the Sabbath.

Because it was Sabbath when Christ demonstrated by his complete death the enormous power of sin, the terrible price that had to be paid to neutralize evil.

Our salvation is only as real as his death was genuine. If he left the cross to merely descend into hell to preach to captive souls, then he wasn’t dead, and the whole event means little to our salvation. If he was merely using that time to escort the soul of the repentant thief into paradise, then his death was a sham, and our salvation isn’t assured.

But he told the truth. His followers did not mourn something that wasn’t a fact. He died. And when they were mourning him, he was not beaming around the universe Star-Trek fashion. No, he had passed into the terrible unconsciousness of death. He died the death of a sinner, although he never sinned. He remained dead until his father called him to life. And because he died he loved me right into eternal life.

I’m thrilled that God in Christ overcomes death. But perhaps concentrating only on Christ’s power to overcome death makes us forget what it was that made him our Savior. It was not the power displayed on resurrection morning that made him our saviour. It was his willingness to be weak. To display his love toward us, “while we were yet sinners” by giving up his life.

While the message of the resurrection is the inexhaustible power of Christ, the message of his death is his inexpressible love for you and me and every other person who stumbles into sin on his way through life.

The message of Easter Saturday comes from the heart of the plan of salvation. On that day of rest, God and his son also rested. And there was as much meaning in that passivity as there was in the activity that followed it.