The Blueprint, Part 1: The Myth of the Perfect Answer 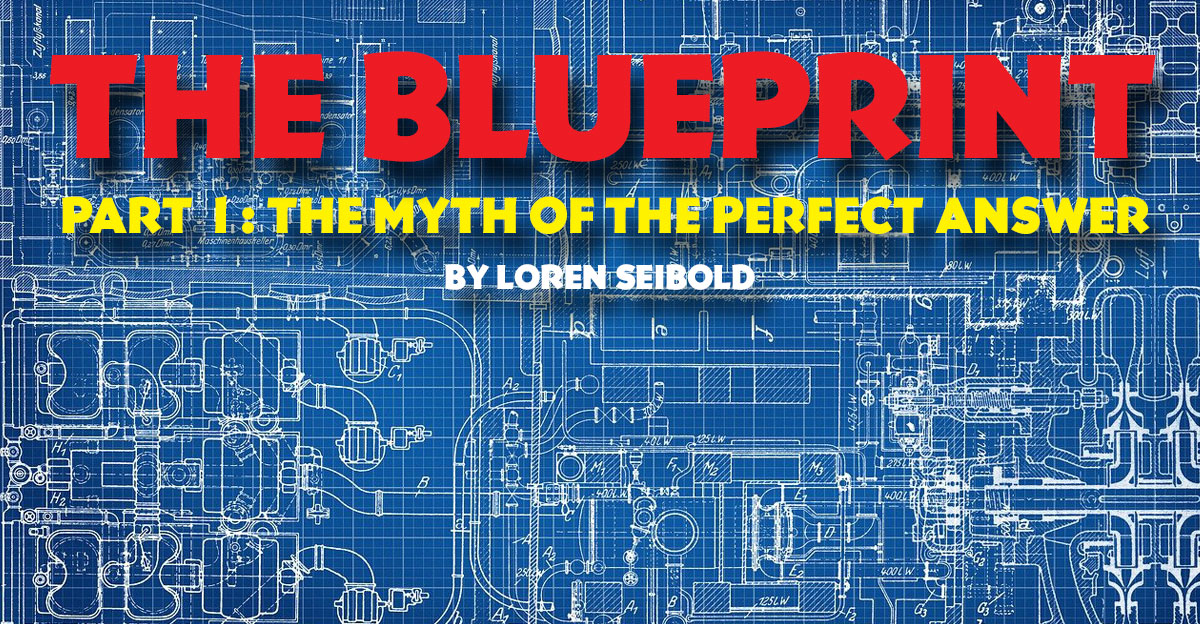 In a memoir in the New Yorker magazine (August 22, 2022), writer Hua Hsu told of how his family tried to overcome the barriers to success in their new home in America. “Like many immigrants who prized education, my parents had faith in the mastery of technical fields—math and science—where answers weren’t left to interpretation,” writes Hua Hsu. “You couldn’t discriminate against the right answer.”

But in the end, Hua Hsu admits that having the right answers wasn’t enough: his father returned to Taiwan because in America, “advancement to the uppermost strata seemed tied to arbitrary factors, like the color of one’s skin.”

Thus the limitations of right answers. Knowledge, it turns out, isn’t enough. Nor, for that matter, is good discipline or hard work.

Life is just more complicated than that—professionally and spiritually.

I’ve met Christians who build their whole lives around having all the right answers. It is a deeply rooted myth among Christians that knowing the right truths and applying them to your life will yield simple and perfect results, like how textbook math problems always had simple and clear answers.

Some Christians apply these right answers to themselves, but often the most restrictive ones are applied to others. Women are particular targets—their bodies, roles and appearance. Lately some people want to apply their right answers to the structures of the entire culture, such as the effort to make governmental laws conform to one group’s personal religious convictions.

Adventists have our own unique attachment to the “right answer” idea, because we claim an unusually extensive list of right answers. I’ve often heard Ellen White’s writings referred to as “the blueprint.” Like a plastic model car or an Ikea flatpack, all the pieces are there; you only have to assemble them according to the brochure, step by step. These folks believe there’s nothing left to interpretation: you need only our right answers and the discipline to apply them, and you will have a perfect life.

The notion that God has a perfect plan for your life is appealing to sincere young Christians, who have a lot of questions about their future. If I pray and follow God’s leading perfectly, God will give me the perfect career, the perfect mate. My personal problems (depression, loneliness, sexual temptation, self-doubt) will magically disappear, and I will end up with an ideal life.

A conscientious Adventist mother told me once, “If you raise your children according to God’s plan, you will produce perfect, successful children.” I know her well, and I know that she did everything in her power (“power” being a key concept here) to raise her children perfectly.

But as it turns out, children aren’t robots that can be force-programmed with right answers to do desired actions for the rest of their lives. Her children grew into frustrated adults who made up for the overcontrol in their childhoods with choices quite different from those demanded of them when young.

I know a young man who studied for ministry because he was certain that if he did that God would take away his attraction to other men and transform him into a heterosexual man. Of course that didn’t happen, and in the end he declared himself an atheist because that expectation wasn’t met.

Of course, most of those who claim to live perfectly according to the blueprint actually pick and choose which parts of the blueprint they want to follow. They can have some success in disciplining themselves in certain aspects of the blueprint, such as eating right, or rigidly controlling their families—but that’s not infrequently at the expense of good relationships and happiness and peace of mind. They end up critical of themselves and others, and rarely are they able to inspire the next generation with anything but guilt.

Some years ago Adventist Today printed a news report about one of our North American Division colleges that was in financial trouble. I can’t remember which one it was—so many have suffered such problems. I do remember one of the comments, though, because it impressed me enough that I copied it:

I’m sorry to hear that the college is having trouble. But let us not forget that God long ago outlined a blueprint for the success of our schools. They were to provide work opportunities in agriculture. Our colleges have failed financially to the extent that they have lost their orchards, gardens, farms and dairies, and scholastically as they have moved toward teaching modern science rather than the science of the Spirit of Prophecy.

I felt some sympathy for the writer, because I know how beguiling is the notion that there is a plain and simple plan, and if we just follow it, everything will turn out perfectly. I believe that the person who wrote this believed that following the blueprint sets aside the need for more complex business decisions: that if we pursue things strictly according to the blueprint, a sudden inflorescence of miracles will make it work even when common sense says it shouldn’t.

To another commenter objecting that these “blueprint industries” had all been given a fair chance, he came back,

Thus we run into one of the problems with believing in the blueprint: who can prove the believers wrong? People with faith can be remarkably resistant to practical facts. Why should a university in the middle of a big urban area, such as Washington Adventist University (WAU), have a dairy?

Or perhaps (as someone once suggested to me) WAU should close and move out into the country so it can start up a farm. But why? Don’t cities need colleges too?

In fact, some of our colleges that did have agricultural industries found them ill-suited to work opportunities for students, almost none of whom still come from farms. Furthermore, agriculture is now high-tech and competitive, relying on trained full-time people and massive capital investments. Institutional farms and dairies not infrequently lost more than they made.

I was once in a board meeting when an academy was discussing selling its farm, which had become a money drain rather than a money maker. Students weren’t employed in it anymore, because their class schedules wouldn’t permit leaving campus for the farm, then cleaning up afterwards.

But oh, how some of the saints complained! The blueprint was timeless, they said. The problem was that our leaders just wouldn’t keep trying it! If you just keep throwing money at the farm, someday God is going to do a miracle and make his blueprint work!

Following the blueprint, these folks seemed to argue, was more important than its success. It appeared to me we were no longer solving practical problems with the blueprint; we were now slaves to the blueprint, even if the results were counterproductive, and had been for years.

When the academy in another conference where I worked was dying, people at a constituency meeting came out (many who hadn’t sent their own children to the academy, let it be noted) to condemn conference leaders for wanting to close it. It must be kept open, they said, because Ellen White had mentioned it in her writings. One person even said we should keep the school alive even if we had to dismiss all the pastors! Is firing all the pastors in the blueprint?

Some of us Adventists even apply the blueprint principle to the return of Jesus. The reason Jesus hasn’t returned yet is that not enough of us are living according to the blueprint. If all Seventh-day Adventists will just live perfectly, then Jesus will be forced to return!

What astonishing self-centeredness! Is this really what God had in mind for us?