Richard Garey and his daughter were visiting Hannibal, Missouri, looking at all the Mark Twain sites, when someone at the visitor’s center asked, “Did anyone ever tell you that you look like Mark Twain?”

Garey smiled. As a Mark Twain interpreter, he wore the trademark whiskers and flowing hair. “Well,” he allowed, “when I’m on stage…”

The woman’s eyes lit up. “Are you an actor?”

“Would you like to work here? We’re looking for someone!”

Garey talked with the manager, and the rest is history. Today, visitors to Hannibal can meet Sam Clemens nearly any day of the week in summer. Not on Sabbath, though. This Mark Twain is an Adventist. 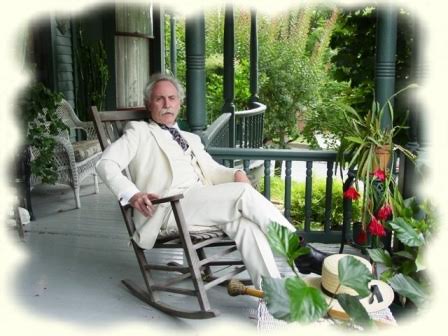 From the time he was five years old, Richard Garey wanted to be an actor. Growing up in the Seventh-day Adventist church, he was never encouraged to follow that dream. In fact, the attempts to discourage him ranged, he says, from the mild to the very harsh. But the dream wouldn’t die. In school, he was involved in drama in whatever ways he could be. Still, it didn’t seem he could make an actual career of it.

So he went to Southern, where he was a pre-law major, and at graduation he was accepted into several law schools. Then the Vietnam War intervened. Garey’s draft board recommended more school, or else teaching, the latter being the stronger probability of preventing a side trip to a jungle arena. He was offered a teaching job in the Potomac conference and accepted.

Garey discovered that he loved teaching. He also had an opportunity to do some work in acting, and later, at Shenandoah Academy, he started what he believes to be the first official drama group in a denominational school. During his ten years on staff at Shenandoah, he was also doing acting in the D.C. area.

Over the years, acting continued to play a strong role in Garey’s life. Because most community theater productions are heavily involved on Friday nights and Saturdays, and because Garey chose not to do other than religious drama during those hours, he came to be what he calls “an entrepreneurial actor.” That is, he created his own shows, put together his own productions, either alone or with teams, and offered them to theaters, universities, etc. “I controlled the times I was available. There was an understanding, sometimes in written contract form.”

More and more, Garey got into one-man shows. He continued to teach and to be involved in drama on campuses, but he was also always working outside that setting, doing various productions.

These productions included a word-for-word presentation of the gospel of Mark, in first person and in biblical costume. (In fact, during our interview we established that I once saw him perform this gospel, in a church in central Ohio in the 90s. I remember being intensely impressed!)

He also impersonated Mark Twain. Which led him to Hannibal, and a new job that was only the beginning. During his first year doing Mark Twain there, a theater came on the market. Now, this was a special theater. Built in 1849, it had begun life as a livery stable. It was known that Sam Clemens had been in it many times; in fact, the family who owned it, the Bowens, were family friends of the Clemens, and Sam and the Bowens sons became riverboat captains together. A young attorney named Abraham Lincoln even stabled his mules there once. Now, as a renovated theater, it had a unique connection to Twain and his life. And Richard Garey was still a dreamer…

“I put in a ridiculous offer. I would not have accepted it myself. I thought, ‘They’re not going to accept.’ But they did! That was in 2002. I never thought I’d have my own theater. The building is wonderful. It’s a challenge, but it’s wonderful! I get to do the show [Mark Twain Himself] in large theaters in various places around the country, but I love doing it in my own theater.” www.heritagestage.com

Garey says his show is unique among Twain interpreters because, rather than simply doing a monologue as Mark Twain, or a story of his life and times, Garey is Mark Twain. He performs the shows Clemens did himself. “I recreate his shows that he did all over the world. Hal Holbrook and I have corresponded—he has wonderful theater show, but it’s like a visit with Mark Twain. I do what Mark Twain did—he’s been called our first stand-up comic. And his comedy is still funny. Comedy often has a short life, but somehow he did timeless stuff and it still holds up.”

People from all over world come to Hannibal because of Mark Twain. Garey says it’s one of the most recognizable small towns in the world. People from Europe or Asia don’t know where St. Louis is, but they know where Hannibal is! He has met some famous people: congressmen, writers, actors. He remembers being told by Sean Astin [the actor who plays Sam Gamgee in The Lord of the Rings], “They were telling me I need to come to your show!”

Garey has developed some more faith-based shows, as well. He has recently developed a show on Captain Joseph Bates, the early Adventist pioneer, which he will be doing at Indiana camp meeting this month. He does “The Centurion” at Easter, or can do the first half of that show in secular settings, as well. But perhaps his favorite is a show called “A Shepherd’s Tale,” a first-person telling of the visit of the angels to the shepherds in Bethlehem. He says he did in-depth research about the life of shepherds in the first century in order to do justice to the production.

On top of everything else, Garey is now entertaining on cruise ships. He works on small ships, where there are perhaps 150 passengers, so he gets to know everybody, and move from table to table, eating with all of them.

Because of all this, Garey says, he has opportunities he would never get any other way. He said that even aside from his faith based shows, when he shows “the sweep of Mark Twain’s life,” people then come and talk to him about eternal realities. Samuel Clemens was known to be adamantly opposed to organized religion, but Garey doesn’t believe that means Clemens didn’t believe in God at all.

“I’ve come to believe that we have things in us, that God placed there. The Bible calls them gifts, but that’s an inadequate description. These are things unique to us, and if we don’t use them, we become miserable.”

“I have learned that witnessing, for me, only works when people ask. But if you put yourself in the right circumstances, they’ll ask.”

Click on Poetry & the Arts for more about Garey’s Mark Twain.