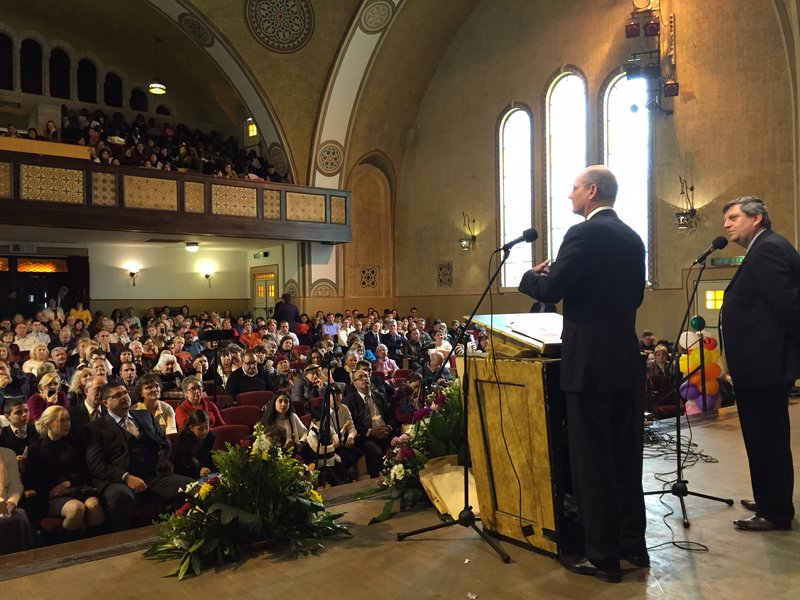 From ANN, February 15, 2016:    On Sabbath, February 13, almost 700 Israeli Seventh-day Adventist members were blessed with a beautiful sunny day. Gathered at the YMCA Auditorium in Jerusalem, congregants enjoyed peace and the blessings of a special Sabbath. Children and adult choirs, plus instrumental ensembles, praised God through music. Testimonies and reports were presented and the congregation sang enthusiastically.

During the service, pastor Ted Wilson, president of the Seventh-day Adventist world denomination, preached on “Building on God’s Church,” with parallels to Nehemiah and the reconstruction of Jerusalem’s walls.

“You are an important part of the construction team building God’s Church and sharing His gospel message far and wide,” Wilson said.

Pastor Wilson also encouraged those present to persevere, have faith only in Jesus Christ and remember the importance of total member involvement and the continued need of revival and reformation until we meet with Jesus in the clouds of heaven.

Pastor Wisam Ali, a former Muslim priest who became a Seventh-day Adventist pastor and the director of the “Life and Hope Center” in Nazareth and Jerusalem, shared how Aisha and Hana found the Biblical truth and finally were baptized at the Jordan River.

In the late 80s, Aisha traveled to Nazareth and visited Seventh-day Adventist missionaries. After more than 25 years, she came back inquiring about the Biblical truth. Pastor Ali gave her Bible studies and she decided to be baptized.

Hana found an old Bible belonging to her father, a very conservative Muslim. Ali’s father and Hana’s father were best friends. She asked Ali about the Bible. Later, she was told that her father and Ali’s father attended an evangelistic program and received the Bible as a gift. Hana took Bible studies and attended the health program at the “Life and Hope Center” in Nazareth.