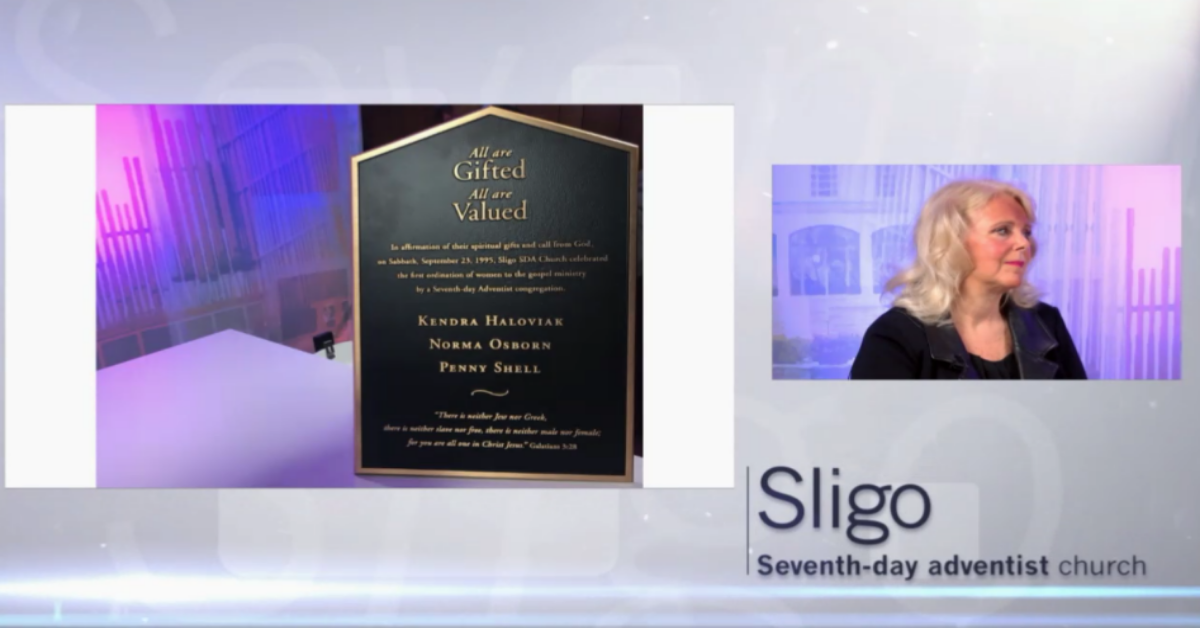 April 10, 2017:     On Saturday, April 8, Sligo Seventh-day Adventist Church honored three women that had been ordained as ministers at the church in 1995.

The special presentation took place moments before world president of the Adventist Church and staunch women’s ordination opponent, Ted Wilson, delivered the sermon at the church.

Their names were inscribed on a commemorative plaque for the occasion. The plaque was titled with the congregation’s motto, “All are Gifted / All are Valued.”

The presentation of the plaque took place during the “Sligo Live” video segment of the congregation’s Sabbath morning church service.

In the brief interview Fuller described the ordinations as “a reflection of Sligo’s values.”

Tapp affirmed his support for women in ministry. He also expressed appreciation for the female pastors with which he had served.

“I wouldn’t want to pastor a church without a female pastor on our staff,” said Tapp.

In addition to the names of the ordained ministers a message on the plaque read:

“In affirmation of their spiritual gifts and call from God, on Sabbath, September 23, 1995, Sligo SDA Church celebrated the first ordination of women to the gospel ministry by a Seventh-day Adventist congregation.”

At the bottom of the plaque was Galatians 3:28.

Immediately after the reading of the plaque inscription, Ted Wilson was announced as the speaker for the service. His sermon title was “No Limits for the Gateway to Service.”

Wilson had been invited as the Sabbath morning speaker for the Washington Adventist University Alumni Weekend which was being celebrated at the church.

He is an alumnus of the institution which was at the time called Columbia Union College.

Under Wilson’s leadership, delegates at the 2015 San Antonio, Texas-based General Conference Session of the denomination voted not to allow world regions of the church the right to decide whether or not to ordain women in their parts of the world.

In practice, this vote meant that the ordination of women remained a violation of official denominational policy.

Screenshot of Sligo Live on SligoWEBTV