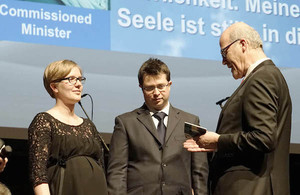 From APD, March 12, 2016:    Some 1,300 people were present a week ago on Sabbath (March 5) for the 114th annual meeting of the Swiss German-language local conference in Zurich. In the morning there were two sermons on sharing the good news of Jesus Christ in a secular context. In the afternoon, four young pastors, including one woman, were set aside to pastoral ministry in a commissioning-ordination service.

Pastor Klaus Popa, director of the German Adventist Media Center where the Voice of Hope radio program and German-language television programs for the Hope Channel are produced, focused on New Testament passages where Jesus was “moved inwardly” by the crowds. Jesus was moved with compassion when he met poor, hungry, helpless and suffering people, Popa pointed out. Their fate had touched him. To overcome blockages to spreading the gospel, the example of Jesus is crucial, said Popa. “Those who come to others and are moved by their needs can help and heal.”

Dr. Rene Gehring, pastor of the Boghenhofen (Austria) Adventist Church and a faculty member at the Theological Seminary located there, stated that “mission is not the task of a congregation, but its essence is.” Gehring explained that family, relatives and friends are the most important factors that bring people to the Christian faith in a postmodern society. Postmodern people do not respond to convincing theories or truths. What impresses them are people whose lives are real and who connect with them personally. For Christian preaching this is both a dilemma and an opportunity. “Postmodern people have respect for people who stand personally for something.” Using the example of Gideon in the Old Testament, Gehring showed in seven steps on how apparently hopeless situations can become life-changing relationships.

In the afternoon a woman pastor was commissioned and three men ordained as clergy. Ordination (ordained ministers), the Adventist Church is a blessing for a worldwide pastoral activity. The commissioning of Adventist pastors “is the full blessing” of a pastor to function within the region or ‘division’ of the worldwide denomination, announced Pastor Günther Maurer, president of the Adventist denomination in Switzerland. In December the leaders of the German-speaking conference in Switzerland decided to commission and ordain pastors at teh same time in recognition that their responsibilities are largely the same. including conducting weddings, funerals, communion services and baptisms. And commissioned and ordained pastors have the same wages.

The ceremony of blessing or “laying on of hands” is the recognized form of the official commission from the community of believers in the appointment of pastors, Maurer said. The denomination thus recognizes the call of God and the qualifications of each person to serve in pastoral ministry. In the Adventist understanding clergy have no higher rank, but a functional commission, Maurer stated. Pastors are disseminators of the joy and peace of God, which have their basis in the experience of salvation, the undeserved grace of God for humanity.

In the morning worship the songs of praise with many children involved was accompanied by the worship band Crossroads. The day concluded with songs from the conference youth choir.

The offering taken in the first service went to the construction of two floating churches on the Amazon and the Rio Solimoes in Brazil, and a neighborhood center in Montevideo (Uruguay). The offering in the second service went to funding the deployment of “His Hands” volunteers in Switzerland who work for one or two years helping a local church reach out to its local community. Since 2010, a total of 18 such volunteers have worked with congregations in the German-speaking area of Switzerland.

Services in which women who are pastors are commissioned and men are ordained is one way that local conferences have adopted to both stay within the gender discrimination required by the General Conference and witness to the inclusiveness of the Adventist faith. It generally is not enthusiastically embraced by either those who favor the ending of gender discrimination in the appointment of clergy or those who continue to hold to the concept that only males should serve as pastors. The majority of the Adventists in the congregation at such services often appears to not care one way or the other, at least in terms of visible expressions.

The day’s program was recorded and has been translated into English, French, Portuguese and Spanish. Recordings can be ordered from Advent-Verlag by telephone at 033 654 10 65. APD is the news service of the Adventist denomination in Europe.