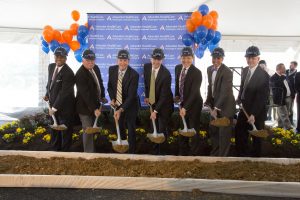 March 13, 2016:    In communities across the United States, health care institutions affiliated with the Adventist denomination are expanding to meet growing needs. Last week Washington Adventist Hospital in the suburbs of the nation’s capital had a groundbreaking ceremony for its new facilities. The new construction is about six miles from the campus that the hospital has shared with Washington Adventist University since 1907. The new campus will be next door to the headquarters of the Food and Drug Administration (FDA), a key Federal agency assuring the safety of food products and the effectiveness of medications.

This is perhaps the most visible and costly of several projects currently underway or recently completed. The new 170-bed hospital will be completed in early 2019, reported the Montgomery County Media news service. The current buildings in Takoma Park will continue to be used for the long term to operate a community health center and other services.

Hundreds of local residents were present for the event. Ike Leggett, the county executive, spoke, praising the “great milestone” achievement that “will inject $800 million into the state’s economy in construction alone.” The new hospital will create nearly 7,500 jobs stated Dr. Stephen Fuller, director of the Center for Regional Analysis at George Mason University.

Adventist HealthCare, the nonprofit that operates the hospital on behalf of the denomination’s Columbia Union Conference, has pursued this project for more than two decades. The aging facilities in Takoma Park were landlocked in a neighborhood where residents were resistant to widening roads and expanding parking, etc.

Expansion in the Midwest Also

Kettering Medical Center in the suburbs of Dayton, Ohio, is completing construction of a new $49 million cancer care center. There is a soaring incidence of cancers in this Midwest city where Adventists have what may be the largest visible presence among major metropolitan areas in America. The new center is across the street from Kettering Memorial Hospital and Kettering College, and across a parking lot from the 1,400-member Kettering Seventh-day Adventist Church.

In late January, the Kettering Health Network celebrated completion of $19 million in construction at two of its other hospitals; Soin Medical Center in Beavercreek and Sycamore Hospital in Miamisburg. A total of 30 additional beds were opened at Soin on its formerly vacant fifth floor and 32 more beds at Sycamore.

“Kettering and other hospital networks have been expanding at a rapid pace to accommodate increased demand,” explained the Dayton Daily News. This is due to “a shrinking uninsured population driven largely by an improving economy and the implementation of the Affordable Care Act and expanded Medicaid in Ohio.”

Last week (March 6), Kettering Medical Center was recognized for the 12th year in a row as one of the nation’s 100 Top Hospitals. Sycamore received the same honor for the seventh time. They are the only two hospitals in the Dayton area included in this top evaluation category by Truven Health Analytics, according to the Dayton Daily News.

Moody’s Investor Service has upgraded its credit rating for Kettering Health Network, the nonprofit that manages eight hospitals and 10 free-standing emergency departments in the Dayton area for the Adventist denomination’s Columbia Union Conference. The bond rating was upgrade from A1 to A2 on $397 million the organization has borrowed, said Moody’s because of strong operating performance over the previous two years.

Adventist Health System (AHS), the largest of the denomination’s health care organizations, is purchasing the administrative office facilities of the Shawnee Mission School District for $2 million, as reported in the Prairie Village Post where one of its hospitals is located in the suburbs of Kansas City. The 5-acre facility is located a quarter mile from the hospital and will provide room for expanded services when the hospital takes possession of it in July next year.

Shawnee Mission Medical Center also received in December a donation of $1 million from one of the physicians who practices at the hospital for an endowment to support mission trips overseas. Dr. and Mrs. Douglas Cusick have traveled with teams of volunteers from the hospital to meet medical needs in China, the Philippines, Argentina, Nepal and other countries over the years. Barbara Cusick told the Kansas City Star that she and her husband believe in the AHS mission statement to provide “compassionate care for the whole person, following the example of Christ’s healing ministry” and want to endow a program that will continue mission trips overseas in the future.

They have involved their three young adult children in the committee that oversee the endowment. The first mission trip under the new funding will go to Peru later this year.

The Tehachapi Valley Healthcare District, also in California, has completed negotiations with Adventist Health, the nonprofit that manages health care institutions for the denomination in four western states, for a 30-year lease of its new hospital in Capital Hills. Adventist Health has agreed to pick up the $25 million necessary to complete construction of the facility if voters approve the deal later this spring.

Adventist Health is also exploring with the Hawaii Health Systems Corporation, a public entity, to take over management of three facilities, including the Hilo Medical Center and Kau Hospital on the Big Island in the eastern part of the state, reported the Hawaii Tribune-Herald in December. The health ministry operates 40 rural health clinics in California, so it has a strong track record for this kind of operation, stated the Pacific Business News.

Castle Rock Adventist Hospital in Colorado opened a $1.5 million expansion of its birthing facilities in December. Last year the hospital had nearly 700 deliveries and in 2016 expects to have more than 950, according to the News-Press local newspaper.

Adventist Health has had significant growth in the patients treated in its 20 hospitals and scores of clinics and health centers and in December purchased a $17 million parcel for a new headquarters in Roseville, a suburb of Sacramento, California. It no longer has sufficient room in the office it has used since 1985 on Dougas Boulevard, reported the Sacramento Business Journal and has 700 employees spread across four locations.

Adventist Health had a 13 percent increase in hospital admissions in the latest year on record (2014) and outpatient visits rose six percent, as more people got insurance under the Affordable Care Act. It had a net income of $117.7 million on revenue of almost $3.3 billion with more than 21,000 employees.

There Are Also Problems

Along with considerable success and expansion, Adventist health care institutions have encountered some problems recently. AHS agreed to pay the U.S. government $2 million to settle allegations that it gave patients chemotherapy drugs that were left over from other patients, reported the professional journal Modern Healthcare last month. Claims were filed with Medicare and other insurance programs for payment as if the drugs were fresh supplies.

In 2011, AHS conducted an internal investigation that found this had happened and in 2012 the organization voluntarily reported the discrepancies to the government. The investigation “didn’t identify any harms to patients,” the journal stated, but AHS “did ‘notify the small number of impacted patients and addressed their concerns.’ [And] has since implemented new procedures.”

A sexual harassment lawsuit was filed last year against Adventist Medical Center in Hanford, California. A female employee caught on video an incident in which a male nurse exposed himself and masturbated while they were in an operating room and a patient was undergoing surgery,” reported the Fresno Bee. And a male physician was accused of making inappropriate remarks and physical contact with a female technician, and “attempts to report [the] behavior to management were mishandled and led to retaliation,” according to The Sentinel newspaper in Hanford.

Kings County Superior Court Judge James LaPorte has ordered arbitration in the case due to the fact that the hospital employees signed an agreement requiring that claims be settled without filing litigation. The lawsuit is delayed pending arbitration.