Submitting to Your Husband in a Postfeminist World 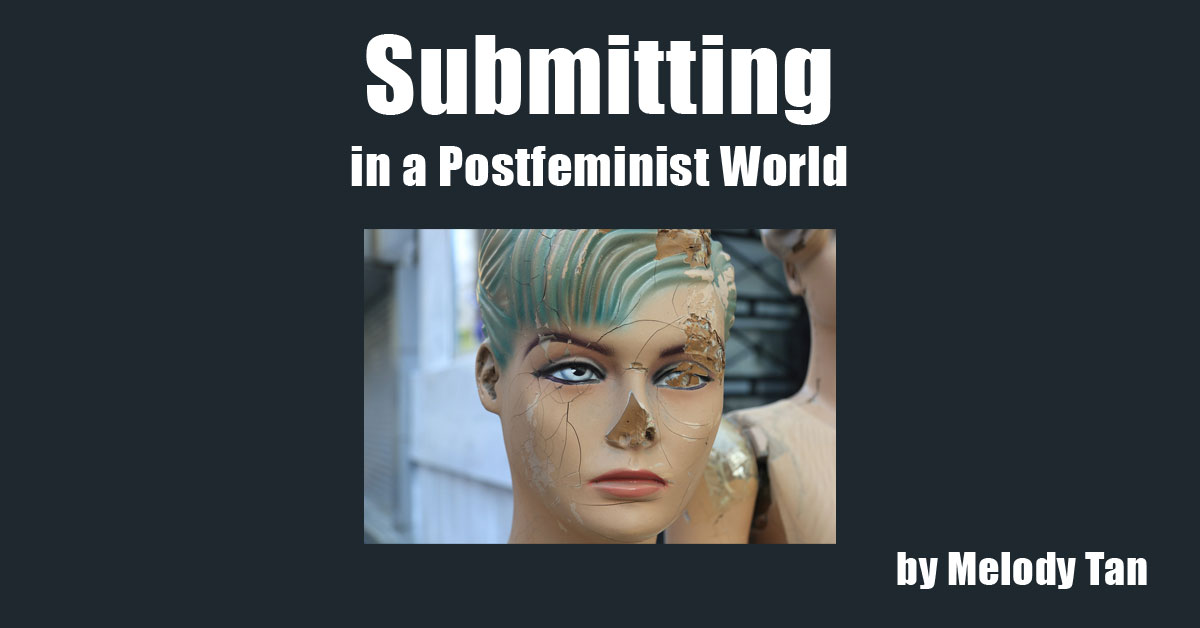 Every nine seconds in the United States, a woman is assaulted or beaten, according to the National Coalition Against Domestic Violence. Which means by the time you reach the end of this paragraph, yet another woman has tragically become a victim of violence.

What makes this statistic scarier is that some women aren’t even safe from the people they know and love. The World Health Organization estimates that one in three women worldwide who have been in a relationship have experienced some form of physical and/or sexual violence caused by their intimate partner in their lifetime.

Take a moment to fully comprehend this fact. These women are not victims of random attacks by strangers. These are women being physically and emotionally damaged by the men to whom they have given their hearts and trust, men they committed to spending the rest of their lives with, men whom they have essentially promised, “For better, for worse . . . until death do us part.” How atrocious that the death is caused by the one person they made that vow to.

Now take a moment to fully comprehend another fact: there is just as much chance that the victim and her abuser are Christians. A 2006 Anglican Church study concluded that the incidence of abuse within Christian churches is similar to the rate within the general population. The reason why the research is more than 10 years old is because domestic violence statistics within Christian congregations are difficult to find. No wonder. Christianity Today reports that a 2014 study found domestic violence is rarely discussed in Protestant church settings.

As Isabella Young writes in The Sydney Morning Herald, “This [is] not evidence that such a problem does not exist, it is just evidence that we are too apathetic to record such things and how difficult it is to get people to speak of them.”

It seems, however, what people like to speak about, is how the Bible has commanded wives to “submit yourselves to your own husbands” (Ephesians 5:22), even in the face of real, immediate danger. Chuck Colson, from Christian Headlines, wrote about a pastor who advised a woman to “try to be more submissive” when she approached him for help after her husband knocked her down, kicked her and broke her ribs. She did, and two weeks later, was dead—killed by her abusive husband.

Christian women, Young writes, “thought that due to what they had been taught in church and reinforced by their spouse, that it was their duty to stay. . . . Often inappropriate statements had been made to them by their pastors, sometimes including counselling them to prayerfully ‘stick it out’ in the midst of severe abuse.”

Male headship—sometimes taught as complementarianism within Christian circles; often viewed as patriarchy by others—is a deeply entrenched tradition of the Christian church and in the context of domestic violence, extremely dangerous. Many, in fact, cite this as one of the many problems with the Christian church. Hardly surprising in a largely secular and postfeminist world where female empowerment, women’s rights and gender equality take centre stage.

Does the Bible really render all Christian women to be meek and mild, always at the ready to conform to the authority of men? I don’t think so, and I would certainly hope not.

Before I explain why, it would probably be helpful to provide a little background. I converted to Christianity (from agnosticism) when I was 18 after a series of events too long to describe here, and following some deep research on the historical evidence of Jesus. I attended a Christian university (even minored in Religion), have spent a good part of my career working for the Christian church and am an active member of my local church. While like most Christians I have experienced crises of faith, almost 20 years later I love, trust and rely on God more than ever.

I also consider myself a feminist. There is a lot of confusion when it comes to the feminist label—people’s opinions of it are not always favourable—so I think it necessary to explain my definition. I believe in feminism in its purest form: equal opportunities, equal rights and equal treatment for both genders. This isn’t about overthrowing men or being blind to the fact gender differences do exist, but simply advocating non-discriminatory attitudes and actions.

I am not a theologian. I cannot provide a debate on Christian apologetics and I most certainly cannot argue convincingly what certain words in the Bible meant in the original language, or the historical context in which the different parts of the Bible were written. All I can give is my interpretation of the Bible, guided by pastors, authors and scholars I respect, with a large dose of prayer and faith that I am being obedient to God in my understanding.

I believe it is possible to be a Christian and a feminist, even in the face of Ephesians 5:22 and Colossians 3:18, “Wives, submit yourselves to your husbands.” I believe the Bible’s instructions to wives can be obeyed without disrupting the delicate balance of gender equality so painfully fought for by my sisters before me, and under no circumstances do I believe they mean staying in an abusive relationship, be it physical, emotional or spiritual.

As a wife and a mother, I am fully prepared and willing to acknowledge the authority of my husband simply because of what the rest of the Bible says: “Husbands, love your wives, just as Christ loved the church and gave himself up for her . . . husbands ought to love their wives as their own bodies” (Ephesians 5:25, 28).

What this means to me is choice. A wife chooses to submit to her husband if—and only if—he loves her as much as he loves himself, as much as Christ loved humanity. And we know just how much God loves us: “For God so loved the world that he gave his one and only Son, that whoever believes in him shall not perish but have eternal life” (John 3:16). Why wouldn’t I submit to a man (or anybody, male or female, for that matter) who treasures me as much as he does himself, would sacrifice everything for my wellbeing and has only my best interests at heart?

“This astonishing Christ-like love . . . elevated the wife at a time of institutionalised cultural devaluation to be equal to her husband, and was the ultimate act of #HeForShe (the UN campaign for Gender Equality),” writes Johanna Harris Tyler for The Drum, an Australian current affairs and news analysis program.

Biblical submission of a wife to a husband isn’t about giving up power or neutralising gender equality. I submit to my husband because he has earned my respect as somebody who is wise enough to make the right decisions for our family, who is humble enough to ask and value my opinion, and who is gentle enough to discuss disagreements without physical or mental manipulation. But most of all, I submit to my husband because I know he will willingly submit himself to me if the situation ever calls for it. We are partners in our relationship, both made in God’s image (Genesis 1:27).

In fact, for all the focus on verse 22 asking for wives to submit to their husbands, many have forgotten the preceding verse, where the instruction for Christian households is to “submit to one another out of reverence for Christ” (verse 21).

“Biblical marriage is about mutually submitting to one another and, individually and together, to Christ, with no earthly, corruptible, conduit. The mutual respect under God of this type of marriage provides no gendered licence to dominance by either wife or husband,” writes Tyler.

Christianity and feminism are not mutually exclusive words, not when both parties are submitted to each other and God.

If you have experienced sexual assault, domestic or family violence, contact the National Domestic Violence Hotline on 1800 799 7233 for help.

Melody Tan is an assistant editor at Signs of the Times magazine in Australia. She and her husband are the parents of Elliott Bell.