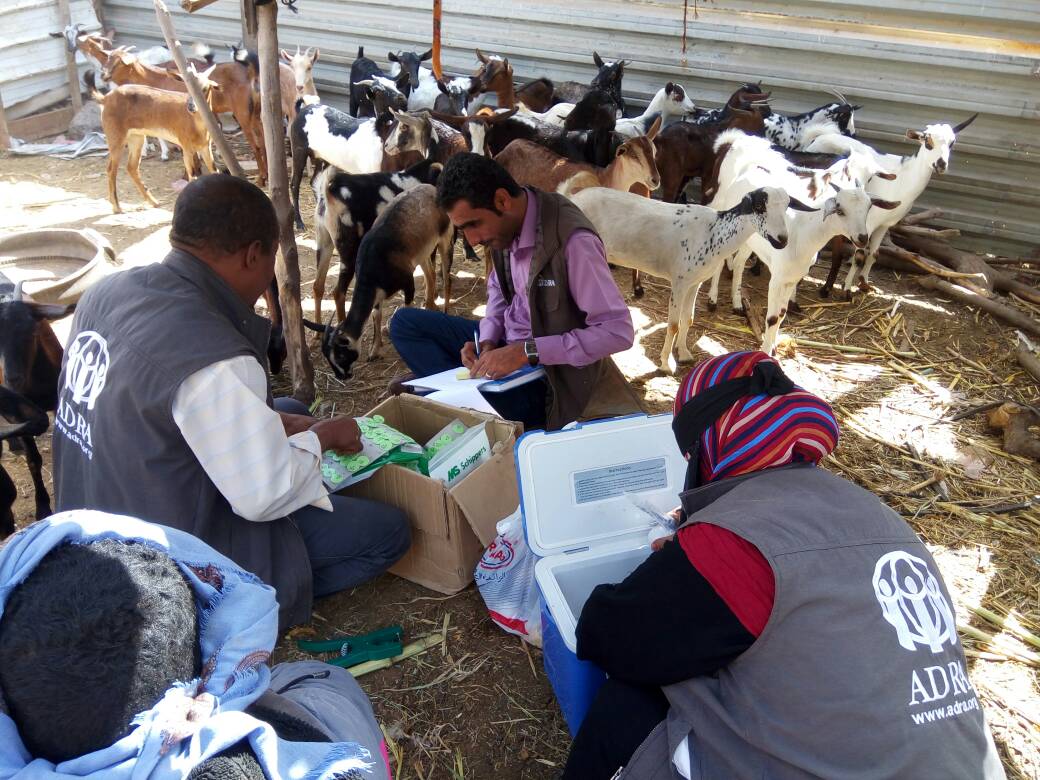 From ADRA – 1 April 2019 | The Adventist Development and Relief Agency (ADRA) for seven months conducted a pre- and post-study on the long-term effects of relief aid provided to 200,000 people in Yemen, many of whom were faced with ongoing unrest since peace treaties broke throughout the country in 2016. The study focused on the implementation of the USAID grant funded project called SALA, which is centered around Small Business, Agriculture, and Livelihood Assistance.

“SALA focuses on supporting people with livestock, livelihoods, and agriculture activities,” says Ephraim Palmero, country director of ADRA in Yemen. “Our goal for SALA was to increase the social and financial well-being among displaced people in Yemen providing sustainable livelihood strategies, improve water and sanitation, and give people access to nutrition services,” he says.

In 2018, the project targeted hygiene promotion and voucher-based assistance, with the end goal to save the lives of conflict-affected individuals in Yemen. Fifty health facilities and five mobile clinics were also established to support and treat malnourished children. Additionally, public awareness education campaigns were created and run for a few weeks to select districts.

In the first trial of the project, ADRA randomly selected 374 households to assess people’s living conditions and sources of income.

Some of the key findings:

“What stood out to me most about the report’s findings was that prior to the program implementation, 72 percent of those surveyed relied on one source of income, but after the program, that number jumped to 81 percent,” says Fahim Safi, technical monitoring and evaluation advisor for ADRA.

Safi added that 50 percent of people who benefited from the program didn’t have enough food to eat, but the percentage dropped to 15 percent after a follow-up survey. “These are signs that the SALA project is working,” Safi says.

One recipient of the SALA program is Ali Suleiman, 50, who benefited from the irrigation intervention.

As head of household for a family of eight, Ali and his family were living well until peace treaties in the country ended. Ali’s family found themselves forced out of their home and displaced to another nearby village.

“I struggled to provide for my family; I was then forced to sell all the goats I owned so my family could survive,” he says. Ali and many other families experienced the same situation throughout Yemen.

Ali received irrigation intervention from ADRA, who worked with him and his family through special trainings that covered irrigation techniques, water conservation, and how and when to use fertilizers.

ADRA also provided Ali with a diesel engine to help reproduce crops in his farmland. Ali used what he learned and was able to reap 15 acres of food on his farm, including watermelon, cantaloupe, corn, and fodder.

“My knowledge about irrigation increased, and production of our farm and income are doing well,” Ali says. His family’s health and economic welfare also improved after receiving support, he added.

With additional food he could sell, he was able to generate an income and used the additional funds to build a kitchen and a bathroom—basic needs his family lacked.

“Our lives have been changed for the better,” he says. “But, my family and I are truly thankful to ADRA for the enormous support,” he says.

SALA serves as a temporary project limited to only 18 months, but ADRA worked with USAID to reapply for additional grant funding to extend the program.

ADRA received approval for an extension and continued providing aid in Yemen. Now, with the extended project, known as MANR, or the Multi-sectorial Assistance and Nutrition Response, provisions of food, shelter, and income generation were provided to Yemenis, with an additional component: health.

“In our pre-study, 71 percent of respondents were in need of health care, and 72 percent were in need of hygiene kits. We saw communities affected by communicable diseases, rampant with malnourished children, and women who are pregnant in need of medical care,” says Safi. “MANR will help us look into advancing the community’s health care and strongly be proactive in responding to requests for additional health services,” says Palmero.

Palmero further said that there are health centers already established located within a mile of the regions. In total, ADRA plans to target 300,000 beneficiaries through this newly added sector, expanding into three additional towns, including Amanat, Al Asima, and Al Jawf.

“We’d love for the project to be expanded even more, but there just isn’t enough capacity to fulfill,” Safi says.

Should ADRA continue ongoing success with MANR, there will be plans to continue the project for another 18 months.

ABOUT ADRA: The Adventist Development and Relief Agency is the humanitarian arm of the Seventh-day Adventist Church. Its work empowers communities and changes lives around the globe by providing sustainable community development and disaster relief. For more information, visit ADRA.org.