22 April 2020 | Elder William L. Winston, the president of the Adventist denomination’s South Atlantic Conference, released a letter today in which he refused to open the churches in the conference despite a decision by the governor of Georgia to end shelter in place orders in the state by April 30.

Winston appealed to Georgia Governor Brian Kemp (R) to reverse his decision to lift the restrictions.

Addressing the governor, Winston said it was “never too late to do the right thing.”

The Adventist leader said that he felt it would be irresponsible for him to reopen churches or his conference headquarters in Decatur, Georgia.

The churches in the South Atlantic Conference—which covers North Carolina, South Carolina and Georgia—will remain closed until Winston and fellow leaders feel it is safe for the conference to return to corporate worship.

Winston’s full letter is pictured below as featured on the South Atlantic Conference of Seventh-day Adventists Facebook page: 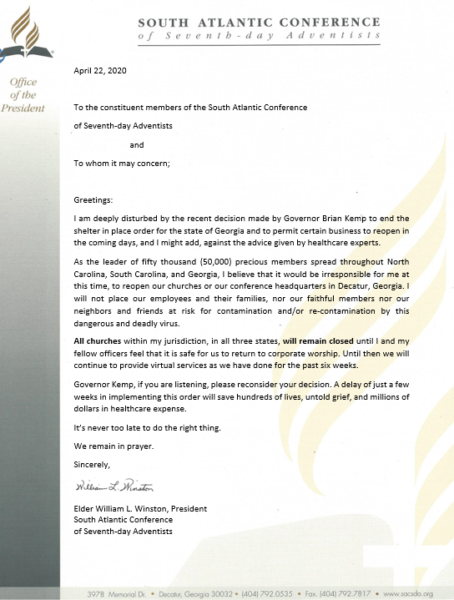