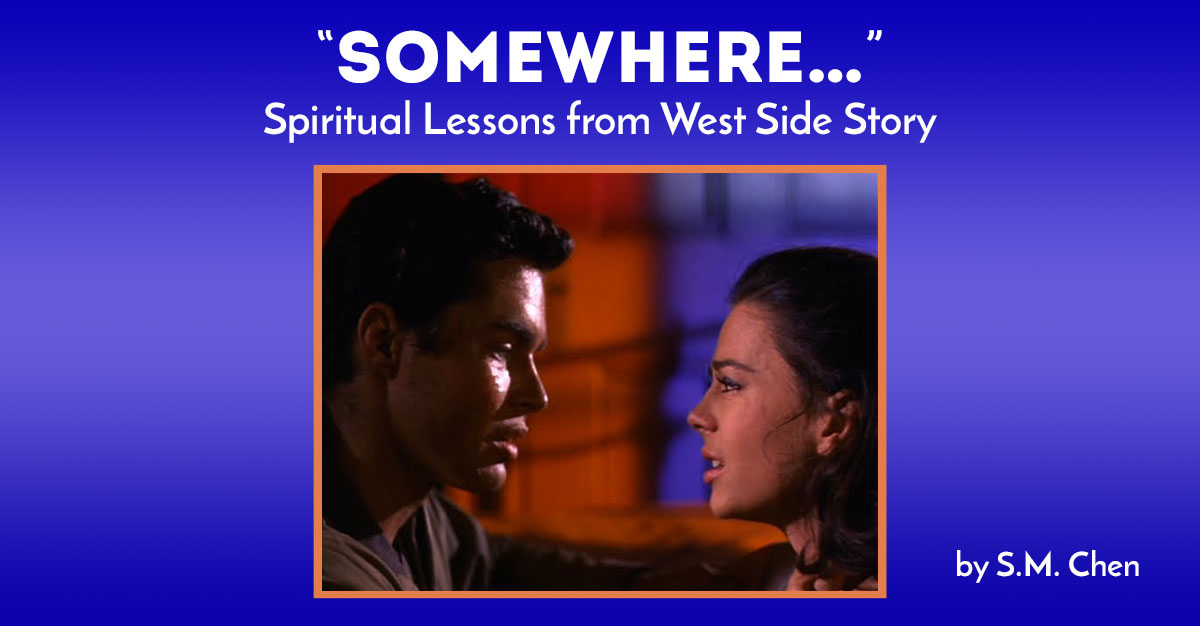 One of the finer achievements of the late musician (conductor and composer) Leonard Bernstein was the music he composed for “West Side Story.”  In collaboration with Stephen Sondheim, lyricist, he created for that musical wonderful songs that endure and delight to this day.

I recently attended a community production of West Side Story.  Necessarily truncated in scope, as compared with the 1961 Robert Wise film version (which won 10 Oscars, including Best Picture) starring Richard Beymer, Natalie Wood, Rita Moreno, George Chakiris, and Russ Tamblyn, it nonetheless preserved the spirit of the original Broadway work in a modern retelling of Shakespeare’s classic tragedy,  “Romeo and Juliet.”

To recapitulate the plot: two gangs in New York City, the Jets (Polish) and the Sharks (Puerto Ricans) vie for the same street turf. There is no love lost between the two.

To settle the issue of primacy once and for all, they decide on a rumble.

At a dance, attended by both gangs, Maria (a Puerto Ricana) and Tony (Anglo, former member of the Jets), set eyes on each other and it is love at first sight. Maria, inconveniently, is the sister of Bernardo, leader of the Sharks.

Circumstances conspire to keep the besotted lovers apart. Maria lives at home and works in a bridal shop. Her life is carefully controlled.

Tony promises Maria he will stop the rumble but, in the heat of the moment, fails. Not only fails, but becomes a key participant.

Initially one member of each gang is selected to fight, mano a mano.  May the best man win.

But things quickly get out of hand.

Bernardo, leader of the Sharks, taunts and pushes Tony, who has tried to be a peacemaker.

Riff, leader of the Jets, steps in.

Soon both he and Bernardo go at each other with switchblades. And Bernardo stabs Riff, fatally.

The gangs then fight en masse, but soon the wail of police sirens is heard.  Gang members quickly disperse, leaving the bodies of Riff and Bernardo behind.

Chino (Maria’s ostensible boyfriend), who has come from the rumble, tells Maria her brother is dead, at the hands of Tony.

Tony then enters, to tell Maria what happened. He does not whitewash the truth. She pounds on his chest with an admixture of rage and sorrow, but her love remains undiminished.

Anita, Bernardo’s girlfriend, learns of Maria’s secret with Tony and, initially, disapproves, but is won over by Maria’s declaration of love.

Anita tells Maria Chino has a gun and is looking for Tony to avenge Bernardo’s death.

Maria asks Anita to (in code, as Officer Lt. Shrank is at Maria’s apartment to question her about her brother’s death) to go to Doc’s Drugstore and ask Tony to wait for her.

At the drugstore, Anita is accosted by members of the Jets, who abuse her to the point that, when Doc himself arrives, she spitefully delivers the wrong message to the gathered group: Chino has found Maria and, learning of Tony, shot her in a jealous rage.

Doc relays the false message to Tony, who has been waiting in the drugstore, dreaming of a future with Maria.

Tony, wild with grief, rushes from the drugstore in search of Chino, so he can shoot him, too.

Just as Tony sees Maria, Chino, from the shadows, shoots him.

Maria cradles the dying Tony in her arms and sings from “Somewhere,” a duet the two have sung before.

She then takes the pistol from Chino and points it at various gang members, Jets and Sharks alike.  “You killed him!” she says. “All of you.”

But she cannot bring herself to pull the trigger.  She sinks, weeping, to the pavement.

Members of both gangs bear Tony’s body away.

Peace has finally come to the streets of New York.

There is much more, of course: wonderful choreography, costumes, setting.

And the music: some songs more memorable than others.

Some are (at least to me) simply marvelous.

The lump in my throat did not disappear until after I departed the venue.

I realize “West Side Story” is at once a love story and a tragedy. The two seem often intertwined.

But the thought came that, in some ways, this might be a small representation of a much bigger cosmic play.

The parallels are not perfect, to be sure, but some of the important women in the life of Christ were named Mary (Anglicization of Maria). His mother, close to Him on Golgotha. Mary Magdalene.

I have little doubt that His mother cradled His body after it was taken down from the cross. Who is not moved by the Pieta, that exquisite sculpture by Michelangelo da Buonnaroti housed in the Vatican?

And is not the whole of Christianity, of redemption, of God’s interactions with man, a love story?

We understand there to be different types of love. Eros figured prominently in “West Side Story,” whereas agape is the linchpin of Christ’s incarnation, ministry and sacrifice. They may lead to similar outcomes.

In the musical play, Tony dies at the hands of another. He gives up his life willingly (but unnecessarily).

Christ also died willingly.  Perhaps necessarily. He prayed in Gethsemane for another way, if there was one. Apparently there was not.

In “Tale of Two Cities,” Charles Dickens has his protagonist, Sydney Carton, say, as he goes to the guillotine in another’s stead, “’Tis a far better thing that I do, than I have ever done.”

If such were Christ’s thoughts on Golgotha, it is not thus recorded, so we have no way of knowing, but I suspect it to be not far from truth.

Despite the agony of body and spirit on the cross at Golgotha, He could say, without presumption, at the end,  “Into Thy hands I commend my spirit.”

Tony’s death brought peace, however brief, to the streets of upper West Side NYC.

Many of Christ’s promises are of peace. He was the Prince of Peace. His death should bring us peace.