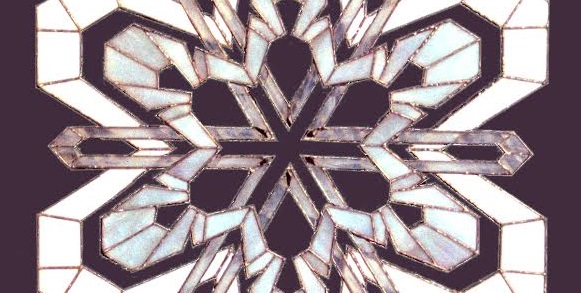 Editor’s note: Faithful readers will recall that we have featured Virginia Davidson and her amazing stained glass art on this site before. This time, Ginnie has shared a heartwarming Christmas story with us.

To see the snowflake fullsize, go to Visual Arts. To see or order her breathtaking work, go to her website. DLK

Ginnie turned on the shaking ladder and looked down. The ground wasn’t so far away, but up so close to the roof of the porch her legs wobbled worse than the ladder! Heights had affected her like this ever since the fall that knocked out three front teeth when she was 16. But she couldn’t give in to fear. There was a job to do. An electric drill waited on the porch roof beside a handful of hardware, and a three-foot glass snowflake glistened in the studio upstairs, ready to be mounted on the side of the house above the porch. If only the ladder would be still!

“Need some help?” a friendly voice called from the street, where a neighbor was out walking her dog in the crisp morning.

“Oh, thanks!” Relief calmed the shakes. “I was just wishing I had someone to hold the ladder. I’ve made a big stained glass snowflake to put up for the kids for Christmas. Jim’ll help me hang it when he comes home from work, but right now I need to decide where’s the best place to put the hooks to hold its weight.”

As the ladder was steadied, Ginnie climbed over the edge and onto the roof. In minutes she had analyzed the structure, marked the hook placement, and drilled the holes. The screwdriver bit replaced the drill bit, and in another minute the hooks were mounted and ready for the “big snow.”

“Would you like to see the snowflake?” Ginnie asked as she maneuvered the tools down the last few rungs of the ladder.

The neighbor noted where her dog was autographing trees across the street. “Sure, I can take a few minutes. He’s busy.”

Up in the studio, the two women gazed at the complex creation of silver and white. Ginnie tried to imagine what it would look like outside in the sunlight. The neighbor finally voiced her thoughts. “How did you ever come up with the idea in the first place?”

“Well, it started back when the girls were little…” and the intervening years melted like a flurry in sunshine.

Ginnie was sitting with Carol and Becky at the dining table finishing up lunch. Jim, also known as Daddy, had already gone back to work. Clouds drifted in a thick, gray blanket across the usually-blue Colorado sky, and the approaching Christmas season loomed dreary and dim.

One bright spot fought against the threatening gloom—a string of miniature colored lights and a few treasured ornaments decorating a small native evergreen. Although Jim had a good job, they were still paying off student loans, and the budget was just too tight for anything more. How could she make the house cheery and Christmassy and memorable for two precious little girls with nothing?

Ginnie stopped short. No! Not nothing!

Back in her memory stirred a small piece of paper being skillfully folded in her mother’s hands; a few artful snips, the unfolding of a snowflake. Ginnie began to get excited. She knew she kept on hand a supply of the cheapest typing paper, which the girls always preferred to coloring books. She still had the good, sharp scissors her mother had given her when she went away to boarding school, and the girls had their own little scissors. In her imagination their small townhouse already danced in glorious paper snow!

“Come, Chickadee! Come, Tiddlywink! Help Mommy clear the table and clean up the kitchen, then I’ll show you how to do something fun!”

The next few hours saw a growing pile of “snow” on the table, with drifts of scraps and snippets on the floor. For days every spare minute was consumed in cutting out snowflakes. Ginnie had as much fun as the girls, folding and cutting, watching each snowflake emerge as it was unfolded. The process was positively addicting! The result was heaps and piles of lacy white snow. Then the intricate flakes began to appear in the windows on the front of the house, then the side, the back, even upstairs. The favorites, the “classics,” went in the kitchen window, where they could be enjoyed up close and cheer the periodic, necessary dishwashing process. And no one, but no one, had decorations with more Christmas spirit.

The following year the surviving snowflakes were joined in the window by a blizzard from another snowflake cutting marathon. And another decorative dimension was added: melted onto the holey surface of an “ice candle,” paper snowflakes created a gift anyone could appreciate. And oh, wouldn’t a huge, grand snowflake be stunning on the outside of the house? But how to make it?

More years passed. Every December lacy paper snow decorated Jim and Ginnie’s windows. And every year saw the snowflakes extend to yet another realm. At one annual craft sale to benefit missions, Ginnie sat at a table and cut snowflakes and sold them for other people’s windows. Another year the “classic” favorites were sandblasted into plate glass hexagons and sold for coasters.

After a class in stained glass, Ginnie scattered a dozen of the favorite snowflakes across a large panel in a sandblasted engraving with iridescent and frost-flower borders. It was satisfying, but still there lurked the dream of a huge white snowflake on the outside of the house at Christmas. It would look so pretty, matching the white trim, contrasting with the gray’ blue clapboards. Suddenly Ginnie realized what it must be. Glass! It should be stained glass!

So came about the glistening snowflake Jim hung that day on the hooks over the porch. It didn’t replace the lacy paper snow in the windows, but it has become a tradition in its own right. Whether or not the ground is white, Jim and Ginnie and Carol and Becky always have snow for Christmas.